Bruce MacEwen is both a doctor and an epidemiologist in the world of BigLaw firms.


A Legal Rebels Trailblazer, he can diagnose structural illnesses, including aspects of the partner-as-owner model, and he can point to unhealthy customs and practices, such as when aversion to failure becomes its cause. He also can give advice and guidance for getting better and surviving or, in some instances, provide a dispassionately detailed autopsy.

MacEwen’s authoritative blog, Adam Smith, Esq., provides plenty of examples and a wealth of analysis and advice. The titles of his books illustrate the curve of his interests: Growth Is Dead: Now What? (2013), A New Taxonomy: The Seven Law Firm Business Models (2014), and Tomorrowland: Scenarios for Law Firms Beyond the Horizon (2017).

MacEwen worked as a big-firm securities lawyer, and then he worked in-house at Morgan Stanley for about 10 years. Although his expertise grew, “the longer I practiced, the more my interest in—frankly, passion for—the management of law firms grew to the point where I decided to start what has become Adam Smith, Esq.,” he says.

That was in 2003, and MacEwen prefers to call it a “publication,” finding negative connotations in the word blog. That also might be because—although he is a clear, relaxed and sometimes-humorous writer—he seems to be by nature a bit proper (not overly so, but enough to be chancellor on the vestry in an episcopal church on New York City’s Upper West Side).

MacEwen’s worldview is largely libertarian, and his undergraduate work in economics at Princeton University grounded his natural and professional lenses more than the law degree from Stanford Law School. Perhaps it was inevitable that his eye turned to the economics and structure of BigLaw.

He had searched the internet to see what others similarly inclined were doing, and he says he “didn’t see a forum or venue for discussion of the economic issues around law firms with the degree of sophistication I thought it deserved.”

MacEwen’s blog has as its theme: “an inquiry into the economics of law firms.” He started to post articles, albeit without fanfare and, as he puts it, “going in stealth mode.” That way, by the time anyone came across it, he would be comfortable with the medium and there would be enough content to engage visitors. There now are more than 1,500 articles.

After a while, MacEwen told some friends about the venture and word spread, bringing wider notice and eventually traction.

Adam Smith, Esq. evolved to include a revenue side—management consulting—and MacEwen brought on Janet Stanton as partner 10 years ago. They have been growing the service worldwide with New York City as their base. MacEwen, president of the corporation, calls the online publication a “credential” for the consulting business.

“He’s been a brilliant observer commenting in a constructive way about BigLaw,” says Alex Hamilton, who co-founded the London-based Radiant Law in 2011, which eschews the use of billable hours and leverages technology for efficiencies. “He writes beautifully and he has a point, damn it, and he’s not afraid to bring an intellectual perspective to the fray.” 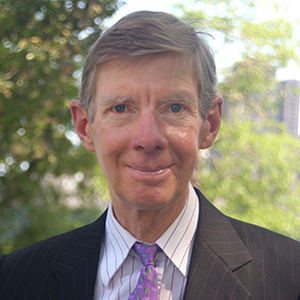 Bruce MacEwen is the founder of Adam Smith, Esq. Consulting Services. His blog, Adam Smith, Esq. has been named to the ABA Journal Blawg 100 Hall of Fame. He is the author of Growth Is Dead: Now What? (2013), A New Taxonomy: The Seven Law Firm Business Models (2014), and Tomorrowland: Scenarios for Law Firms Beyond the Horizon (2017).