President Donald Trump says he wants to ‘make America great again,” in part by investing in upgrading our “obsolete” infrastructure. University of Southern California law professor Gillian Hadfield has a proposal that may not be on the top of the president’s list.

That headline may have been a bit of “fake news” to get you to click to this book review. But as you may know, we here at the New Normal have long advocated having law schools engage more with the profession. To the extent that law schools concern themselves primarily with legal theory, they tend to operate in a self-contained echo chamber, with less influence over the profession and society and less opportunity to test those theories against reality to make them more powerful. Medicine and other fields have moved much more strongly to an evidence-based model, with faster learning, less hierarchy and faster practice improvement.

Hadfield is one of the most consequential legal scholars doing evidence-based work. Her recent book—Rules for a Flat World: Why Humans Invented Law and How to Reinvent It for a Complex Global Economy—is a must-read for lawyers trying to see the whole landscape of the legal New Normal. 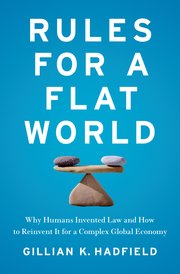 More than most books, Rules contains the kernel of its message in the title.

Rules. Law school trains us in legal reasoning, i.e., the ability to argue over what rules should apply in a particular situation. But 99.9 percent of the time, rules just apply without active intervention from lawyers. Hadfield brilliantly describes how most rules arise from humans’ innate drive to fairness and collaboration (that’s what led to our evolutionary success), and most of the time the rules just are, there’s no debating them. When debate happens, it often adds cost and conflict without any clear benefit. As Hadfield writes: “The legal systems we have are failing ever more regularly to do what law is supposed to do: make it easier for people to work together and make life for all better, not worse. The project of law … is how to get people to behave in particular, predictable ways without terrorizing or dominating them.”

Flat world, complex global economy. Flat world of course comes from Tom Friedman’s 2005 book of the same name, describing how borders are disappearing with commerce and technology. While Brexit and the recent U.S. presidential election suggest a turn away from globalization, the overwhelming direction will continue to be digitalization and globalization. “The economic relationships that need regulating are increasingly digital and as difficult to nail down as jelly.”

Why humans invented law. While many of the drivers of law are innate, it is an entirely human-invented field. There’s nothing especially magical about any choice we make, but most choices are rooted in what rules we need to manage our society—and they hopefully are tested by some empirical notion of whether they actually work. “Social order is achieved with rules, about who can do what, when, and how. With good rules, we waste less of our time fighting over things and pour less of our energies into things we can’t keep or use, or activities that don’t end up getting us more of what we want. The rules that support social order are a platform: They provide the structure on which choices and interactions are built.”

But as Hadfield describes it, rules don’t always require governments—they often emerge organically, whether among the California gold rush miners or the Bushmen of the Kalahari. Hadfield cites Harvard Law School professor Lon Fuller: “Law is the enterprise of subjecting human conduct to the governance of rules.’” Hadfield also coins the term legal infrastructure—the “almost invisible platform of rules and practices on which we build everything else in our economy”—to describe the overall functioning of the legal system today, and says that it is lagging the technology and commercial infrastructure of our time.

Having been in Silicon Valley for nearly two decades, I often gave a talk to visitors from other regions on how they could (or couldn’t) develop a similar economic development model. Most were surprised when I explain that rule of law and other elements of Silicon Valley’s legal “infrastructure” are critical differentiators.

The system is law, not lawyers. Lawyers are valued intermediaries, but as the role of both law and (in most fields) intermediaries changes, lawyers must adapt. But as Hadfield points out, for a variety of reasons, our legal infrastructure is less adaptable than other systems, and it is not keeping up with the pace of change in other fields. “There’s little incentive for anyone to invest either brains or money in the terrifically challenging task of figuring out how to build better legal infrastructure…. In our most sophisticated legal markets, we are churning out very smart lawyers from very fancy law schools, populated by very impressive law professors. But most of these lawyers and law professors are expert in doing what our legal systems do now. There’s next to no research and education about how to design rule systems, institutions, and technologies that deliver what we need from legal infrastructure in a rapidly changing world. There’s effectively no research money devoted to figuring out how to invent new kinds of legal systems—ones that don’t cost as much and work better, in the great variety of settings in which we need law to work. There are essentially no private foundations devoted to innovating new ways of doing law. “

How to reinvent. Here, Professor Hadfield is at her most powerful. She has long been an advocate of opening up the profession to new forms of competition, from nonlawyer ownership of law firms to relaxing unauthorized practice of law rules. As Hadfield writes: “We need to bring to our legal infrastructure the kinds of responsive innovation and investment that competitive markets bring to the rest of the economy. We need more active markets for law and lawyers…. We need to harness market incentives to invent more effective, less expensive, and easier-to-implement rules and regulatory systems, coupled with governments that ensure that those rules and systems achieve the goals set by an open political process.”

She closed with what could be the New Normal call to arms.

“We need as much energy and ingenuity and philanthropy devoted to solving the problem of law in the global digital age as we devote to figuring out how to develop clean energy, reduce poverty, and deliver safer disease-free communities. More to the point: any solutions we think we are developing toward clean energy, reduced poverty, or safer disease-free communities depend on developing better legal infrastructure.”

Friday, Feb. 17, there will be a symposium to discuss Hadfield’s book at the University of Colorado Law School—another nice milestone in the advance of the legal New Normal.