10 Questions: Kristen Clarke is a leader in 21st century fight for civil rights 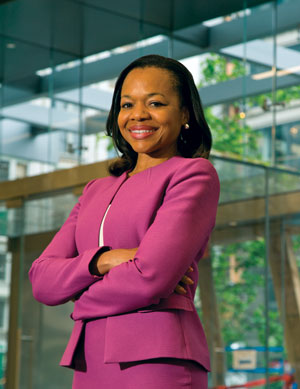 For anyone who thinks the civil rights movement is defined by grainy 1960s news footage and austere, mostly male advocates, meet Kristen Clarke. Through leadership roles at the NAACP Legal Defense and Educational Fund, the Justice Department and the New York State Attorney General’s Office, this dynamic lawyer has been on the forefront of the 21st century civil rights movement, fighting on behalf of the nation’s most vulnerable citizens over issues of race, gender and sexual orientation. In January, Clarke became president and executive director of the Lawyers’ Committee for Civil Rights Under Law. This Washington, D.C.-based group was formed in the 1960s at the behest of President John F. Kennedy to galvanize the private bar in the fight for equal justice, but it’s never been more relevant—and more necessary—than it is today. Its latest challenge: elections. Through a national program called Election Protection, Clarke and the committee are working in tandem with lawyers across the country to ensure all voters will be able to access the ballot box this November and every election cycle.

Q. What’s a typical day like for you at the Lawyers’ Committee?

A. Every day brings a unique set of challenges. Today, a full panel of justices in the 5th Circuit is hearing a case regarding the Texas photo ID law, one of the strictest laws of its kind in the nation. Also our Election Protection initiative is in full force and effect during the primary season.

Kristen Clarke joined us for 10 Questions Live on August 25. Watch a recording of the event, which included questions submitted by readers, at this link.

Q. Tell me more about that.

A. After Bush v. Gore, it became evident that there was a need for groups like the Lawyers’ Committee to step in to resolve Election Day challenges that voters face. The Election Protection initiative is one of the hallmarks of the work we do. Through the program, lawyers and law firms across the nation make their offices available to host an Election Day hotline (866-OUR-VOTE) to hear from voters and resolve the challenges they face. Some voters may be seeking assistance verifying their registration status while others may be reporting problems at the polls such as ballot shortages, late openings, last-minute polling-site changes or issues with restrictions such as photo ID requirements. We work with election officials to resolve as many problems as possible to ensure voters can successfully cast a ballot. For those problems we are unable to resolve, we may litigate to ensure access to the polls in future elections.

Q. Are hotline phones ringing yet?

A. Absolutely. Already we have fielded complaints from more than 22,000 voters across the country, and I am sure when this story runs in August, I will have an updated figure.

Q. Do you anticipate that number will skyrocket?

A. This is a dark moment in American democracy. The Supreme Court issued a ruling in 2013 that gutted our nation’s most important federal civil rights law, the Voting Rights Act, and since that time we’ve seen many states take action to turn the clock back. There are now 17 states with new voting restrictions on the books. It is critical that we oppose these efforts through litigation and advocacy and help voters overcome these obstacles.

Q. Where did your sense of social justice come from—from your parents, or maybe along your educational journey from boarding school to Harvard University and Columbia Law School?

A. My parents immigrated to Brooklyn from Jamaica a few years before I was born. They wanted their kids to have access to better schools and greater opportunities than what existed on the island. I grew up in a household that was about discipline, working hard in school and about making the most of every opportunity. I’ve been blessed to have had amazing opportunities. I’ve experienced what it’s like to be underprivileged, and I’ve experienced very privileged settings as well. I feel a deep sense of responsibility to use the opportunities that I have been given to help those less fortunate. We live in a nation that’s divided along lines of race and class. I have a personal sense of what life is like on both sides of that divide, and I want to figure out how we close some of those gaps and level the playing field.

Q. In addition to your law career, you’re also a mom. Does that add a different dimension to your advocacy work?

A. I have an 11-year-old son who is obsessed with soccer, and when I am not here at work, I spend a lot of my time shuttling him between games and practices. He keeps me on my toes, and he inspires me. A lot of the work that I do is motivated by the hope and desire that he gets to grow up in a world that’s a more fair place, and that he’ll have access to opportunity and not have racial barriers stand in his way.

Q. Do you talk with him about difficult issues like police violence?

A. I do. It’s almost unavoidable in this era of social media where people are transmitting images at lightning speed. The Eric Garner death is something that kids watched on their cellphones at school.

Q. How does that make you feel?

A. I worry. He’s just a year younger than Tamir Rice, the 12-year-old boy who was shot by the police in a park in Cleveland while playing with a toy gun. My son has a high level of self-awareness of what it means to be a black boy in this country. He has a high level of awareness of the problems that black boys and black men face at the hands of the police. But at the same time, I do want him to be a kid and just have fun playing soccer.

Q. If lawyers want to get involved advocating for civil rights, what should they do?

A. One way is to get involved in the Lawyers’ Committee, an organization that is built on the concept of pro bono service. I would also suggest taking some time to help out at a local public defenders’ office, which are fully overburdened but where the right to counsel for poor people is at stake.

Q. After the election, what’s the next challenge for the Lawyers’ Committee?

A. I think there is much work we need to do to address the impact that mass incarceration has had on our population and on the African-American community in particular. At every turn, people are coming out of incarceration for relatively nonviolent offenses and are encountering barriers to employment, education, housing and access to voting—the very things necessary to successfully reintegrate into their communities. I am very encouraged by the bipartisan focus on this issue right now, but more work is needed. Once people have paid their debt to society, they deserve a second chance, and that principle will drive much of the work that we do at the Lawyers’ Committee.

This article originally appeared in the August 2016 issue of the ABA Journal with this headline: “A Modern Movement: From the helm of a historic agency, Kristen Clarke is a leader in the 21st century fight for civil rights.”