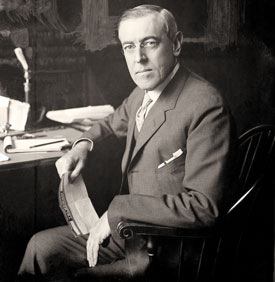 Against what was happening elsewhere in early 1915, a mid-January meeting in Washington seemed inconsequential, even if it was at the White House. France was losing ground against the Germans at Soissons; Italy had suffered a massive earthquake; and the rebel forces of Pancho Villa in Mexico were threatening the ruling Carranza regime. Still, President Woodrow Wilson met with Dr. Anna Howard Shaw and a small group of suffragists—and for the first time, he was not politely dismissive.

The National American Woman Suffrage Association was conducting a state-by-state campaign to win the vote for women, and Shaw was soliciting presidential support for suffrage in New Jersey, where Wilson had been governor. Just a year earlier, Wilson had rebuffed the women—this after 5,000 members of the National Woman’s Party caused a near-riot when they marched on Washington the day before his inauguration. But women were gaining notoriety and power on a number of political fronts; and even with a European war on the American horizon, Wilson had to notice that women were already prominent in the social movements that would govern the coming decade: labor, suffrage and Prohibition.

Women had been involved in the labor movement since the Civil War. A shortage of male workers created opportunities for women with the industrialization of the North. But their presence also created new sources of pressure for equal treatment in and out of the workplace and new voices demanding better working conditions for workers of all kinds. Whether the demands came from feminists, labor leaders, Progressives, anarchists or birth control activists, the core message was the same: Women wanted more say about the conduct of their lives. And the demand wasn’t always peaceful.

Just two years before Shaw’s meeting with Wilson, union activist Mary Harris “Mother” Jones—known by some as “the most dangerous woman in America”—had been convicted and sentenced in a military court for her part in an armed conflict involving coal miners in West Virginia. As a key organizer for the United Mine Workers, she became an iconic force in a series of labor uprisings throughout the nation’s mines and mills, from Pennsylvania to Colorado. Likewise, anarchist firebrand Emma Goldman embodied the angry opposition to capitalistic concentrations of power. Before her imprisonment—and subsequent deportation in 1919—for encouraging draft resistance during the Great War, Goldman had been at the center of a violent steel mill strike, an attack on a steel industry executive, and she was even questioned about involvement in the assassination of President William McKinley.

Some of the voices were determined but peaceful. Florence Kelley, daughter of a prominent abolitionist, had become a leading advocate for the eight-hour workday and a pioneer in the use of social science in court cases such as Bunting v. Oregon (1917), which upheld the power of states to regulate the health and safety of workers. Working from a minor post in the YWCA in Richmond, Virginia, Lucy Randolph Mason was becoming a force in the drive against child labor. And through her stewardship of the New York Consumer League, Frances Perkins grew close enough to New York Gov. Franklin Roosevelt to become secretary of labor—the first woman ever named to a Cabinet post—when he became president. 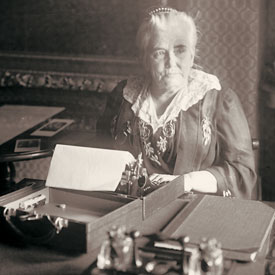 Photo of suffragist Dr. Anna Howard Shaw courtesy of the Library of Congress

Although the Woman’s Christian Temperance Union was primarily associated with Prohibition, the group’s political ambitions were closely allied with the drive for suffrage. Frances Willard, the WCTU’s second president, had turned the organization toward a wide variety of social injustices, including suffrage; and gaining the vote would provide a vital tool in all phases of the movement. After her death in 1898, Anna Adams Gordon, Willard’s longtime companion, made sure the organization would continue its work on women’s rights in the workplace and child labor.

The political role of women and Prohibition was not lost on the beer and liquor interests, who saw the rise of female voters as a threat to the viability of their businesses. Shortly before passage of the 18th Amendment, a lobbyist for the United States Brewers Association boasted before Congress: “We have defeated women’s suffrage at three different times.”

Shaw, a physician and a Methodist minister, had begun her activism with the WCTU, but had been guided toward suffrage by Susan B. Anthony. By 1917, as the National Woman’s Party continued its “Silent Sentinel” protests in front of the White House, Wilson readied Congress for entry into the war in Europe; and Shaw urged Wilson to include suffrage as part of his war plans. By October 1918, Wilson was ready to do so. In an extraordinary speech to Congress, he maintained that suffrage was “vital to the winning of the war.” Congress rejected a constitutional amendment, but approved one a year later. By January 1920, the 18th and 19th amendments had been ratified—women’s suffrage and Prohibition were in place.