2013 raises to peak for midlevel associates at midsize firms

Smack dab in the middle may be the best place to be as far as 2013 salary increases are concerned, the Robert Half Legal 2013 Salary Guide reports.

“Average starting salaries for legal professionals in the United States are projected to rise 3 percent overall in 2013,” reports the legal staffing firm specializing in lawyers, paralegals and other highly skilled legal professionals. “The largest increases in base compensation are expected for associates, paralegals and legal secretaries at midsize and small-to-midsize law firms. Litigation support specialists also should see greater-than-average salary gains.” 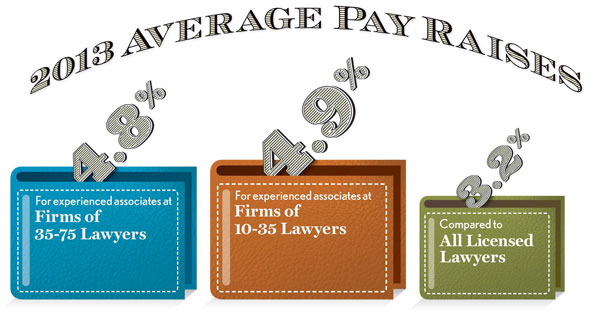 DATA EXCERPTS FROM The Robert Half Legal 2013 Salary Guide

While salaries have not yet returned to pre-recession levels, many hiring managers are offering above-average compensation and bonuses to attract the industry’s best candidates and retain their most valuable employees.

Copies of the full salary guide can be downloaded from the Robert Half International website.