A Sour Note from Gideon’s Trumpet 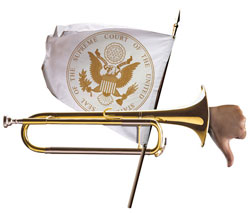 It didn’t turn as many heads when it was decided the same day as the U.S. Supreme Court’s much-discussed ruling tossing out a massive sex-discrimination class action against Wal-Mart Stores Inc.

But the outcome of Turner v. Rogers prompted a robust discussion among attorneys over the rights of civil litigants to obtain counsel.

The high court ruled June 20 that the 14th Amendment’s due process clause does not automatically require a state to provide counsel to an indigent person facing a civil contempt proceeding, even if the person faces incarceration.

But the five-member majority also held that the South Carolina man jailed for 12 months for nonpayment of child support should at least have been given alternative procedures that would have notified him that his ability to pay the overdue child support was the critical question in his contempt case.

Among the case’s observers was the civil Gideon movement, a community of organizations and advocates who promote the appointment of counsel to indigent litigants in adversarial civil proceedings, particularly when basic human needs such as shelter, child custody, health or safety are at stake.

The movement takes its name from the landmark 1963 Supreme Court decision Gideon v. Wainwright, which incorporated the Sixth Amendment into state felony criminal trials and required the provision of counsel for indigent defendants. The case also was the theme of the 1964 book Gideon’s Trumpet by Anthony Lewis.

“It’s kind of shocking to see no right to counsel in a case in which someone faces more jail time than he would face for criminal contempt,” says Russell Engler, a professor at the New England School of Law in Boston and a civil Gideon proponent, who calls the decision a mixed bag.

“It goes against everything we seem to stand for,” he adds. “In the long run, the impact of the decision will be less about its language and more about its application at the state and local level. It’s possible the world could be a better place in five to 10 years because of this decision.”

Turner also prompted an online debate on the Concurring Opinions blog, with one writer titling a piece, “Does the Supreme Court Get It in Turner?” Another posting was labeled: “Turner v. Rogers: Why the Supreme Court is a Day Late and a Dollar Short.”

But others saw a silver lining in the court’s insistence on procedural safeguards.

“The facts here are what they are—the Supreme Court found the appointment of counsel was not required in this case, and that has disappointed people,” says Michael S. Greco, a past president of the American Bar Association and the chair of the ABA Working Group on Civil Right to Counsel. “But this decision, if you read it carefully, could lead to the expansion of the civil right to counsel, even though it doesn’t mandate that.”

The case stemmed from a 2003 family court proceeding in South Carolina. Michael Turner was ordered to pay $51.73 per week in child support to Rebecca Rogers, the mother of a child they had together.

Over the next three years, according to court papers, Turner paid some support or had his wages withheld, but he eventually fell behind and was held in contempt on five occasions. He spent a few days in jail on two findings, and he completed a six-month sentence after the fifth one.

Upon his release in 2006, Turner remained in arrears on his support payments, and on Jan. 3, 2008, he appeared at a contempt proceeding when he was more than $5,700 behind. Rogers also appeared at the hearing, with neither party represented by counsel.

Turner told the family court judge that he had tried to pay “a little bit here and there” but had fallen back into a problem with drugs and was laid up with a broken back.

“Now I’m off the dope and everything,” Turner told the judge. “I just hope you give me a chance.” The judge held Turner in willful contempt and sentenced him to 12 months in jail, the maximum allowed.

Turner appealed, this time with the help of pro bono counsel. The South Carolina Supreme Court last year ruled that indigents have a right to counsel in criminal contempt proceedings, but not in civil ones.

Writing for the U.S. Supreme Court majority, Justice Stephen G. Breyer said the court’s precedents “provide no definitive answer” to the question presented. Among the cases he cited was one viewed by civil Gideon advocates as a deep disappointment, Lassiter v. Department of Social Services. The court held in 1981 that due process did not require appointed counsel in cases that could lead to the loss of parental rights.

Breyer said Lassiter implies that the court had found a right to counsel only in cases involving incarceration, “not that a right to counsel exists in all such cases.” But a set of “substitute procedural safeguards … can significantly reduce the risk of an erroneous deprivation of liberty,” Breyer said. Such safeguards would include notice that the defendant’s ability to pay was a critical issue, the use of a form to elicit relevant financial information, and an express finding by the court about the defendant’s ability to pay.

Writing for the dissenters, Justice Clarence Thomas said the due process clause does not provide a right to appointed counsel for indigent defendants “in any context outside of criminal proceedings.” Thomas then criticized the majority for reaching beyond the question presented to hold that Turner’s incarceration did not meet due process because of the lack of alternative procedures.

Some outside the civil Gideon movement say the high court got it right—mandating procedural safeguards that could benefit pro se litigants without imposing a sweeping right to counsel that would ultimately prove difficult to implement.

“I think it is helpful that the court recognized that a lawyer is not the solution to every civil problem,” says Benjamin H. Barton, a law professor at the University of Tennessee at Knoxville.

Barton has an article in the December 2010 Florida Law Review, “Against Civil Gideon (and for Pro Se Court Reform).” In it, and in an amicus brief filed in Turner, he argues that “civil Gideon is a bad idea and saps energy and resources from a better, more workable solution” to the problems the poor face in civil court proceedings.

“Insofar as the civil Gideon people can win this battle politically, I’m all for that,” says Barton, referring to state legislative mandates and funding for the provision of indigent counsel. “But I’m much more concerned if you have the courts mandating it.”

But civil Gideon advocates were deeply disappointed. Georgetown University law professor Peter B. Edelman, an advocate for appointed counsel in civil cases, says the court majority’s view about procedural safeguards as an alternative to counsel was unrealistic.

“I don’t think the court understands what it’s like to go into court without a lawyer,” Edelman says. “It would be good for the whole lot of them to go spend the day in landlord-tenant court and see if they have the same view.”

Greco, a partner at K&L Gates in Boston, was ABA president when the House of Delegates adopted a report and resolution urging federal, state and local governments to provide an indigent right to counsel in civil cases where “basic human needs” are at stake. Last year, the House of Delegates adopted two measures aimed at furthering that goal—the ABA Model Access Act and the ABA Basic Principles of a Right to Counsel in Civil Legal Proceedings.

While he, too, sounded at least somewhat disappointed that the court did not find a due process right to counsel in the proceeding before it, he says the decision was still potentially a landmark one.

“This decision is progress,” Greco says. “It’s not 100 percent, but it’s certainly a strong step forward, and it will help the states to have this decision.”