A Touch of Class: Certification, Says One Brief, 'Is the Ballgame' 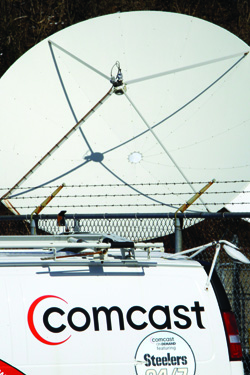 The most closely watched high court case this term is an antitrust suit filed in 2003 on behalf of some 2 million Philadelphia-area Comcast cable customers. AP Photo/Gene J. Puskar

The U.S. Supreme Court threw out a massive class action against Wal-Mart last year, ruling that a class of female employees alleging sex discrimination by the giant retailer had been improperly certified, and that there was an absence of proof of a general policy of bias against women.

The decision in Wal-Mart Stores Inc. v. Dukes settled some big questions regarding class actions, but it left others open. This term, the court is taking up several more cases raising class action issues. The case that the business community and the plaintiffs bar are watching most closely is Comcast Corp. v. Behrend, which also deals with the question of whether a class of plaintiffs was properly certified under the Federal Rules of Civil Procedure.

Meanwhile, in Amgen Inc. v. Connecticut Retirement and Trust Funds, the court will examine the level of proof needed to certify a class action under certain types of securities misrepresentation cases. Both cases are scheduled for argument on Nov. 5.

And in Standard Fire Insurance Co. v. Knowles, the court will weigh whether a named plaintiff in a class action can keep a case from being removed from state to federal court by submitting that less than $5 million is at stake. The court had not scheduled the argument date by the magazine deadline.

“The court has remained very interested in class certification,” says Joseph M. Sellers, a partner at Cohen Milstein in Washington, D.C., and the lawyer who represented the female workers in the Wal-Mart case. (While the company now uses the name Walmart, it was incorporated as Wal-Mart Stores in 1969.)

The business community asserts that modern class actions are large, expensive and unpredictable, and that certification of a class brings enormous pressure to reach a settlement.

The Comcast case involves an antitrust action brought by consumers in the Philadelphia area, the headquarters of the cable-television and entertainment giant.

The plaintiffs allege that Comcast and other providers engaged in “swaps” of territories and subscribers in certain big metropolitan markets to help boost their market positions. In the greater Philadelphia market, these swaps boosted Comcast to a dominant position and discouraged “overbuilders”—nonsatellite cable competitors such as RCN Telecom Services—from entering the market. The result of the alleged anticompetitive conduct, the plaintiffs contend, is higher prices for cable service in violation of the Sherman Antitrust Act.

A federal district court first certified the plaintiff class in 2007, but after the Philadelphia-based 3rd U.S. Circuit Court of Appeals issued an important class action ruling in an unrelated case, the district court re-examined the certification question in 2009. The court took into account reams of expert reports, depositions and live testimony in a four-day hearing over antitrust impact and damages to the proposed class of cable customers in the Philadelphia market.

In 2010, the district court again certified the class—limited to the theory that Comcast had engaged in “clustering” through market swaps and other means, and that the tactic deterred the entry of overbuilders into the Philadelphia market.

A 3rd Circuit panel affirmed the class certification on a 2-1 vote. The majority held that the class had met its burden of showing that the anticompetitive effect of clustering cable systems was capable of proof at trial through evidence common to the class, thus satisfying the key federal procedural rules provision at issue.

The 3rd Circuit majority said the proper inquiry was whether the plaintiffs could demonstrate, through a preponderance of the evidence, that they could prove antitrust impact through common evidence at trial.

The court acknowledged that the Supreme Court had suggested in its Wal-Mart decision that the landmark standard of evaluating expert testimony may apply to expert testimony at the class certification stage. The standard comes from the high court’s 1993 decision in Daubert v. Merrell Dow Pharmaceuticals Inc.

“We understand the court’s observation to require a district court to evaluate whether an expert is presenting a model which could evolve to become admissible evidence, and not requiring a district court to determine if a model is perfect at the certification stage,” the 3rd Circuit said.

Comcast appealed, and the high court granted review but rewrote the question: “Whether a district court may certify a class action without resolving whether the plaintiff class has introduced admissible evidence, including expert testimony, to show that the case is susceptible to awarding damages on a classwide basis.”

Sellers, who is not involved in Comcast, says “the touchstone for this case is about the appropriate role of expert testimony” at the certification stage. “It’s an important issue,” he adds.

The 3rd Circuit “seems to approach a standard that is approaching Daubert but is not quite Daubert,” Sellers says.

Comcast declined to allow its lawyers to comment. In the company’s merits brief, Miguel A. Estrada of Gibson, Dunn & Crutcher in Washington, D.C., argued that the plaintiffs cannot establish damages from the alleged anticompetitive behavior under the theory of antitrust impact accepted by the district court. That means the class should not have been certified under the federal rules.

The brief says the key expert’s damages model “could not establish classwide damages because it was insufficiently helpful and reliable to satisfy the minimum requirements for expert evidence.”

Deborah R. White, president of the Retail Litigation Center, says major retailers are frequently the targets of class actions over employment and other claims. “The risk is just too high” for defendants once a class is certified, she says. “Most rational corporate decision-makers, once the class is certified, will try to find a way to settle the case.”

She hopes the high court continues a trend of requiring plaintiffs to meet rigorous standards for expert testimony and a litigation theory that strictly meets the federal rules.

“You can’t just scratch out the theory of your case on the back of an envelope” and receive class certification, White says.

Barry Barnett of Susman Godfrey in Dallas, the lead counsel for the plaintiffs suing Comcast, takes issue with the claim that the certification fight is always the whole ballgame.

“I’ve tried plenty of antitrust class actions,” he says. “Certification does not end the case. This case is a poster child for that.”

The district court certified a class in the case in 2007, and again in 2010. Settlement talks were prompted by a federal district judge’s May 2012 decision to set a trial date for this past September. In Barnett’s view, the two sides have a valid settlement, which the plaintiffs are asking the district court to enforce even as the Supreme Court moves forward. Comcast is disputing that a settlement has been completed, he says.

Joshua P. Davis, a professor at the University of San Francisco School of Law who has written widely on class certification, says that the Comcast case is potentially of major significance.

“The Supreme Court has made class certification progressively more difficult and expensive,” Davis says. Raising the bar for expert testimony at the certification stage would increase litigation costs for plaintiffs and defendants, he says.

“Class certification doctrine has become very tortured,” Davis continues. “We seem to be in a time of change.”

“A Touch of Class,” November, refers incorrectly to what prompted settlement talks in an antitrust class action against Comcast Corp. According to court papers, the settlement talks began after a federal district judge in May 2012 set a trial date for the class action for this past September, not right after the 3rd U.S. Circuit Court of Appeals affirmed the recertification of the plaintiffs class in August 2011.