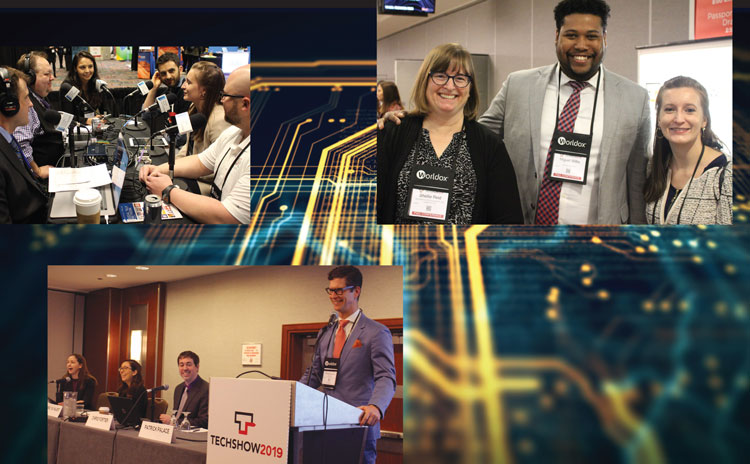 In the ever-evolving world of legal technology and cybersecurity, it can be overwhelming to determine the right platform or vendor for a firm.

But it doesn’t have to be.

The overall theme of 2019’s iteration of ABA Techshow, which took place from Feb. 27 to March 2 at the Hyatt Regency Chicago, was “future-proofing your practice.” In that vein, Sharon Nelson, president of Sensei Enterprises in Fairfax, Virginia, and Jeff Richardson, partner at Adams and Reese in New Orleans, stressed during their panel session that it was important not to get paralyzed by indecisiveness as a result of the abundance of technological options available in the marketplace.

For many, said Nelson, finding the right technology is “confusing” because it’s not what lawyers do: They practice law. While covering a plethora of technologies, she and Richardson focused on the need for security features such as device encryption, two-factor authentication and mobile device management, which allows a firm to control, find and wipe clean mobile devices if they are lost or stolen. But their vetting process also works for case management and billing software or hiring a security audit or training firm, for example.

For those who don’t have the time to read the blogs, listen to the podcasts and stay up-to-date on every new tool or security feature, Nelson recommended hiring an expert to be a “BS filter” and cut through advertising language and slick sales pitches. She also noted that getting endorsements from trusted colleagues is also a good way to vet technology because “they don’t have a dog in the hunt.”

Technology can be pricey—but lawyers don’t need to break the bank. During a different panel session, Sherri Davidoff, CEO of BrightWise in Missoula, Montana, told the audience: “The most effective things in cybersecurity are free.” She and co-panelist David Ries, of counsel at Clark Hill in Pittsburgh, said the cheapest and most effective way to minimize risk is to minimize data. They offered several ideas for how this could be accomplished.

Ries recommended that attorneys classify their data based on its level of risk, and take inventory of where and how long they store it. Davidoff suggested attorneys store less data and delete data that they don’t need. “Then you can tell your clients: ‘We keep your data for five years or seven years,’ and that is your policy across the board,” she added. “Then they won’t be surprised when you don’t have it 10 years later.”

Davidoff suggested that attorneys create a data map and retention policy so they can decide up front which data they store and where it is allowed to go. She said they should also keep a record of when they delete information in case of a data breach or in case a client asks about it.

Ries said attorneys also should implement a comprehensive cybersecurity program that is appropriately scaled to the size of their firm and the sensitivity of their information. It should include an incident response plan that outlines steps that have to be taken if a data breach happens. They also should utilize password managers, such as LastPass; multifactor authentication; encryption on mobile devices; and business versions of cloud services, which typically are more secure than consumer versions.

“There are cost-effective ways to deal with most things in security,” Ries said. “Dealing with policies and procedures and training can be done with little to no cost, but you have to spend the time and effort to do it.”

Law schools can also improve their tech offerings without going into the red. Many universities provide free access to Microsoft Office 365 for everyone, said Joe Mitzenmacher, a reference and electronic services librarian at Loyola University Chicago School of Law. He recently discovered that Ross Intelligence, an online legal research tool that uses artificial intelligence, offers students free trial subscriptions. Mitzenmacher co-teaches a legal technology class and often relies on guest speakers to speak for free on topics such as cybersecurity. He also invites vendors to his class to teach students about software.

The conference did not just focus on free or affordable technology. In her keynote address, Elizabeth “Betsy” Ziegler, CEO of 1871, a Chicago-based incubator, talked about advances in technology that are already being utilized, such as virtual news anchors built on artificial intelligence, fully automated restaurants and computerized contract review. Things we could see in the near future include 30-minute rocket flights halfway around the world and flying cars.

“The rate of change will never be slower than it is today,” she said.

This article was published in the May 2019 ABA Journal magazine with the title "Plenty of Options."