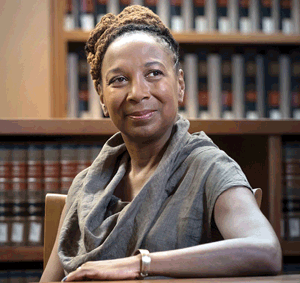 Few people outside of academia are familiar with intersectionality. But many understand—and embrace—the hashtag #blackgirlsmatter, which is a more descriptive way to point out that some people who experience oppression have multiple social categorizations and frequently are forgotten in social justice movements.

Other hashtags include #breakingthesilence, which draws attention to community leaders developing and advancing agendas for gender-inclusive racial justice; and #whywecantwait, a response to the 2014 White House program My Brother’s Keeper, which centered on opportunity gaps for men of color but did not include women.

One of the group’s most well-known hashtags, #sayhername, focuses on police brutality against black women, and it ties in with 2014 protests. In 2015, the AAPF released the report Say Her Name: Resisting Police Brutality Against Black Women.

“Social media has been absolutely critical. I think many people have heard of ‘Say her name’ in a shorter time than ‘intersectionality,’ ” says Crenshaw, a professor at the UCLA School of Law and Columbia Law School.

“I have a wonderful, diverse and young staff at the AAPF who pretty much work around the clock trying to figure out how we promote the idea that social justice requires us to be intersectional in our thinking and in our scope of vision,” she says.

“When women are killed, people don’t see those same frames playing out, and they don’t know what to do with the story,” she explains. “Social media makes it possible to go underneath a story, which sometimes abruptly ends.”

The Say Her Name report includes the stories of numerous black women who were killed by police or died in custody. Among them are Sandra Bland, the 28-year-old who died in Texas police custody, and Aiyana Stanley-Jones, 7, who was shot and killed by police in 2010. Joseph Weekley, a Detroit officer, said he accidentally shot the child during a struggle with her grandmother. The grandmother denied that, and another officer testified that there was no struggle. Weekley returned to restricted (not in the field) active duty in 2015 after five years of off-duty status and two court mistrials.

Inspiration for the AAPF, which this year celebrated its 20th anniversary, came from the 1995 Million Man March, media coverage of boxer Mike Tyson’s 1992 rape conviction, and the 1991 controversy over Anita Hill and Justice Clarence Thomas. Crenshaw attended Thomas’ confirmation hearings to support Hill, a law professor and former government lawyer who testified that Thomas sexually harassed her on the job.

Thomas described the hearings as a high-tech lynching. A New York Times/CBS News poll found that people favored his confirmation by a 2-to-1 ratio, and among blacks a higher ratio favored Thomas.

“That experience showed how easy it was to mobilize African-Americans to support Clarence Thomas and oppose Anita Hill through a demand for racial solidarity that excluded Anita Hill and virtually every other black woman who had experienced sexual abuse,” Crenshaw says. “It was another example of intersectional failure—the failure to be aware of how black women experience discrimination, including historical racism and sexism.”

Black women founded one of today’s most well-known social justice groups, Black Lives Matter, and Crenshaw says some of them also identify as queer. It’s encouraging that women who are queer are leading Black Lives Matter, she says, noting that black women always have led racial justice movements. But their work often is overlooked by historians, the media and those who provide financial support.

“At the moment, we have women in leadership, but what the media picks up are things we’re more familiar with, like stories of men killed by police and racial profiling based on race and gender,” Crenshaw says.

A 1984 graduate of Harvard Law School, Crenshaw was drawn to the institution by an admiration for Derrick Bell, its first black tenured professor and an originator of critical race theory. She also found inspiration from Harvard criminal law professor Alan Dershowitz.

“He was not a mentor at all,” she says. “I took his criminal law classes and was fascinated about how he put together a career of handling cases at the margins of law and integrated that back into his research and teaching. I thought that was one of the best jobs I’d ever seen.”

The daughter of Ohio educators active in the social justice movement, Crenshaw became known for introducing intersectionality to feminist theory in the late 1980s. When thinking about what to name her think tank, Crenshaw wanted something that would make clear that gender affects both men’s and women’s lives, which is why she didn’t include “women” in its name.

This article originally appeared in the December 2016 issue of the ABA Journal with this headline: "#Attention: Law professor’s forum sheds light on racial injustice."