'After the JD' study shows many leave law practice 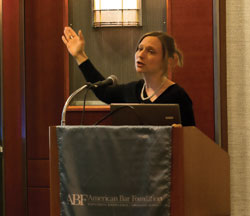 A third-wave survey of lawyers who passed the bar in 2000 has found a decline in the percentage of lawyers practicing law and major differences in pay based on gender, law school ranking and grades.

Twenty-four percent of the surveyed lawyers were not practicing law in 2012, compared to about 9 percent who weren’t practicing in 2003, according to preliminary survey findings. The results are from the After the JD study, which tracked a national sample of lawyers who passed the bar in 2000 with surveys in three waves—in 2003, 2007 and 2012. More than 3,000 people responded to the third survey.

The careers with the highest percentage of nonpracticing lawyers were in the nonprofit and education sector, where about 75 percent weren’t practicing, and the federal government, where nearly 26 percent were nonpracticing. Nonpracticing careers included law professors, real estate agents and investment bankers, Dinovitzer said.

Panelist Daniel Rodriguez, law dean of Northwestern University, said the study highlights the need for schools to break down silos between law, business and other programs to prepare students for careers outside of traditional law practice.

Entry-level jobs have declined since the survey, Rodriguez said, raising questions about the value of law schools for those who don’t practice law. The value proposition may well depend on the level of educational debt, he said. He noted that the lawyers in the After the JD study likely had lower debt than later grads.

The survey is funded by the ABF, NALP and the National Science Foundation.

This article originally appeared in the April 2014 issue of the ABA Journal with this headline: “After the JD Shows Many Leave Law Practice.”