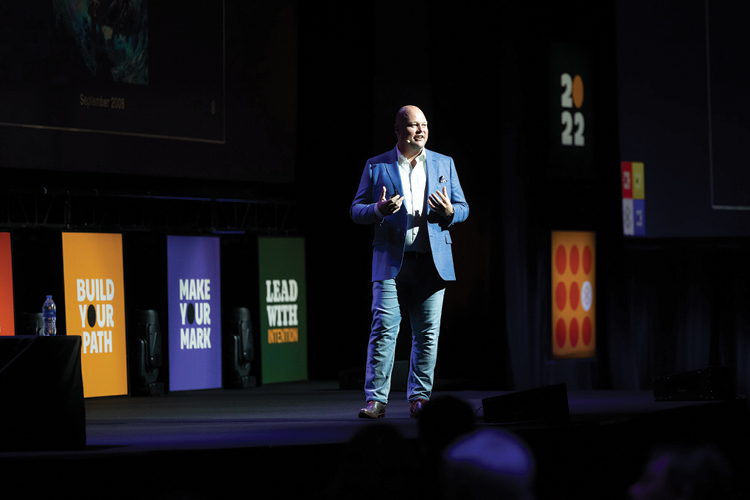 Jack Newton, the founder and CEO of Clio, gives his keynote address to a sold-out crowd at ClioCon 2022. Photo courtesy of Clio.

In October, as Clio CEO and founder Jack Newton gave his keynote address inside a cavernous ballroom at the Gaylord Opryland Resort & Convention Center in Nashville, Tennessee, it was standing room only.

About 2,000 legal professionals and tech enthusiasts traveled there to attend Clio Cloud Conference 2022, and an additional 1,000 attended virtually. Newton’s keynote was also beamed to a watch party in London. Meanwhile, ticket holders in India, the Philippines and Switzerland tuned in to the multimillion-dollar event, which is planned up to two years in advance.

“This year’s ClioCon is our biggest and best ever. We have broken attendance records from the last in-person ClioCon we had back in 2019. … It’s amazing to have all of you in one room, and the energy here is palpable,” Newton said after he strode onto the stage to flashing lights, music, whoops and cheers.

For ClioCon organizers, the hybrid event showed that even in the midst of a lingering global pandemic, inflation and uncertain economic times, it could still pull off one of the biggest conferences in legal tech.

But Clio and other tech show organizers still face challenges as well as lessons on how they can tailor future shows for audiences who may expect a virtual option.

Hybrid events can be more expensive to put on. Organizers also need to weigh whether they will lose attendees if they offer a virtual option, and how they can cater to sponsors who may prefer to pitch to people in person.

They also have to consider people who are wary of in-person gatherings. In December, the Axios-Ipsos coronavirus index found that half of Americans reported resuming pre-COVID-19 routines.

Still, just over a third of Americans see contracting the virus as a moderate-to-large risk, according to the index.

But despite that and uncertainty about the course of the pandemic, Newton says he took a calculated risk to stage an in-person event after a long hiatus.

“People are hungry for human connection. They’ve felt beaten down by 2½ years of pandemic restrictions and event cancellations,” Newton says.

Lawyer and journalist Bob Ambrogi attended the Clio Cloud Conference. And while he remains a fan of the event, he said it seemed slightly off its game in 2022.

“I might start with pointing a finger at COVID. Look, all of us are a bit rusty in our social skills. We are all a bit out of practice doing anything that involves gathering with other people in social situations.

“If that is true for smaller gatherings, then it is true in many multiples for massive gatherings,” Ambrogi wrote on his blog, LawSites.

Relativity Fest was an e-discovery and compliance conference at the Hyatt Regency Chicago that also offered a virtual option. But Carol Vore, who traveled to the October conference with the Human Trafficking Institute, says she never considered the digital pass.

“Everything feels a bit more optional, especially when everything’s recorded,” when attending a conference online, she says.

Even so, Vore noticed energy levels waning among attendees as the conference continued into its second day.

“It’s 3:40, and I’m ready for bed,” Vore said as she crossed a reception area on a Thursday afternoon. “Before, I could probably do this for six or seven hours and feel OK. It’s easier to get exhausted.”

Jimmy Vestbirk put on three pandemic-era Legal Geek conferences in London. In 2020, the conference was online only, while the 2021 and 2022 conferences were hybrid events.

He says it is difficult to draw any conclusions about whether COVID-19 is still impacting the atmosphere at conferences. So many variables can play into how attendees receive events, including travel disruptions and whether it’s raining or the sun is out, he says.

“I would say that there’s a pent-up demand,” Vestbirk says of Legal Geek’s 2022 in-person conference.

“We sold the event out a week before, and I didn’t notice people feeling reserved at all,” he adds.

Vore believes hybrid conferences are the future, especially for people wary of large groups, those with pandemic-related mental health issues and individuals with commitments that make travel difficult.

“If they have the opportunity to attend virtually, they will always do that. And so I don’t think that’s going away anytime soon,” Vore says.

All the same, mounting a hybrid event can create headaches for conference organizers. That’s partly because of audience expectations that the virtual experience mirror the in-person experience—with high production values to boot, Vestbirk says.

“You have to have good cameras. You have to have good sound,” Vestbirk says. He says organizers must also factor in connectivity in order to stream audio and video as well as the logistics of using a venue to produce online content. He notes that some venues insist conferences use in-house teams, which can also increase costs.

Most legal tech shows have offered online access at a discount. And Vestbirk says building an online component has been one of the biggest economic challenges.

Vestbirk intends to enhance the in-person experience at future Legal Geek events in London. But he will still offer high-quality recordings of Legal Geek panels to attendees.

Cynthia Thomas is co-vice chair of ABA Techshow 2023. She says the ABA also had to overcome budgetary concerns to mount its first-ever hybrid conference in early March 2022. The conference happened shortly after a winter surge in COVID-19 cases stemming from the omicron variant. That’s why it wasn’t as well attended as other tech shows held later in the year, Thomas says.

“People were still very fearful of going out in public,” she says.

As more Americans emerge from the pandemic, Thomas believes other shows could choose to relegate or abandon virtual offerings.

She argues that participating online is “not conducive” to socializing, educating and “bringing people together.”

In addition, there is always the risk people who would usually show up in person will opt for a cheaper virtual ticket instead, Thomas says.

“It would deter people from coming in,” she says. “It’s not just about learning about technology and what will benefit you or your law firm; it’s about having conversations on the exhibit floor and learning from your peers, which is difficult to do in a hybrid situation.”

Epidemiologist Dr. Jonathan M. Zenilman, a professor of medicine at Johns Hopkins Bloomberg School of Public Health, says there will be an ongoing demand for hybrid conferences, partly because people are still vulnerable to COVID-19.

Organizers still should consider rates of infection and urge attendees to stay home if they are not feeling well, he says. Conference spaces are typically large and well-ventilated, he adds, but networking events where food and drink are served are riskier because people gather closer together.

“You can’t just ignore it. You have to have some type of awareness about it,” Zenilman says. “There’s a lot of pushback because people just want it all to be done.”

Meanwhile, Newton’s view is that the hybrid model gives him the opportunity to grow the audience for future Clio Cloud Conferences. He agrees, however, that his company is better resourced than other organizations considering hybrid events.

Newton has spoken to organizers who see the decision about whether to go hybrid as a “zero-sum game.” He says that is partly because of the demands of sponsors and exhibitors who want to engage with attendees in person.

This story was originally published in the February-March 2023 issue of the ABA Journal under the headline: “Virtual Reality: Are hybrid legal tech conferences here to stay?”