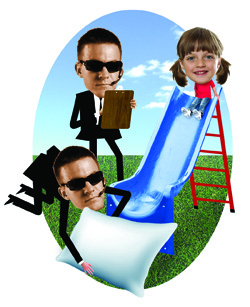 Many of us as kids had our favorite rides at the local playground. And if memory serves, they tended to be the ones with the greatest potential for mayhem. Some of us enjoyed (a little too much, perhaps) the merry-go-round, which could be spun at alarmingly unsafe speeds and then boarded, and the sole purpose appeared to be to separate kids from their lunches.

And let’s not forget the ubiquitous swingset, which for some of us was only good for two things: trying to swing so high that you would actually go over the top, or getting some good forward momentum and launching yourself off to see who could land the farthest away.

Such behavior today is leaving village and school administrators aghast. Why, those playground contraptions are nothing more than lawsuits waiting to happen, you can almost hear them say. And that seems to be the mindset taking hold around the country as playgrounds are gutted and rebuilt with an eye toward safety and, most of all, litigation avoidance.

Yes, that appears to be the No. 1 reason for taking the actual fun out of the playground experience. (Admittedly, safety improvements are always welcome and sometimes necessary, but to kids they must seem like such a buzzkill.)

One school on Long Island went so far as to ban footballs, baseballs, hard soccer balls, lacrosse balls, rough games of tag and cartwheels(!) during recess. Balls from now on will be of the Nerf variety. Weber Middle School in Port Washington, N.Y., claimed it was because of an increase in playground injuries, but one has to wonder whether it’s at least partially due to a fear of liability and lawsuits, as if the thinking was “OK, now let’s see the little so-and-sos get hurt.”

Some school districts even take it a step further and ban recess altogether—because of the lawsuit thing, but also because of the frivolity of actually interrupting studies to let the students go outside and play. Recess? We’ll never get those math and science scores up that way.

Timesunion.com, which covers upstate New York, reported last year that localities in that state pay upwards of $1 billion annually to settle all different types of lawsuits. No wonder, then, that recess has become a naughty word in so many school districts.

But what about the growing epidemic of childhood obesity? Or the fact that many experts on child behavior insist kids are more productive and pay better attention when they get a break from academics? Shouldn’t we be able to strike a balance that will keep the process servers at bay?

Let’s face it: Kids are going to create chaos somehow, some way, and you can either schedule it and control it or take your chances by bottling up all that energy and keeping them inside all day.

But if fear of lawsuits is going to keep our kids in a perpetual layer of bubble wrap, then someday for them the real world is going to seem like anything but child’s play.

This article originally appeared in the December 2013 issue of the ABA Journal with this headline: “The End of Childhood? Despite the ever-increasing threat of lawsuits, it’s called a playground for a reason.”