Back at Ya: Employee Retaliation Claims Play Big Before the High Court 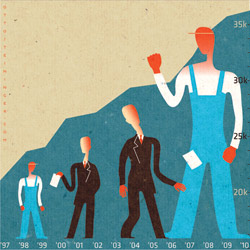 Employers, beware! if you or your supervisors retaliate against employees, don’t expect relief from the U.S. Supreme Court. The high court continues to be a favorable forum for employees who allege retaliation from their employers.

It’s a trend that belies the court’s reputation as favoring business, and it contrasts with the fate of other underlying discrimination claims, such as those based on race, sex, age or disability.

“The court repeatedly has ruled in favor of the right to complain about employment discrimination in a wide variety of contexts,” says University of Washington School of Law professor Eric Schnapper, who has handled retaliation and discrimination cases. “The court has been better on the whole in this area [retaliation] than the courts of appeals.”

Schnapper successfully argued for Eric Thompson, who was fired from his job at North American Stainless only three weeks after his fiancee—also an employee—filed a sex discrimination case. Thompson claimed retaliation and sued under Title VII of the 1964 Civil Rights Act. NAS countered that Title VII afforded him no remedy for a retaliation claim because he had not personally opposed any unlawful employment practice or participated in a Title VII proceeding.

In a 2009 en banc ruling, a majority of the Cincinnati-based 6th U.S. Circuit Court of Appeals agreed. Title VII’s anti-retaliation provision protects employees who oppose unlawful employment practices, complain about discrimination in the workplace or participate in an employment proceeding, such as testifying in a co-employee’s discrimination suit.

But in January the Supreme Court ruled 8-0 in Thompson v. North American Stainless that Thompson was covered under Title VII’s retaliation clause. “Thompson falls within the zone of interests protected by Title VII. [He] was an employee of NAS, and the purpose of Title VII is to protect employees from their employers’ unlawful actions,” wrote Justice Antonin Scalia.

“This case certainly closes a loophole some courts—and employers—had found in Title VII’s anti-retaliation provision,” says Lawrence Rosenthal, who teaches employment discrimination law at Northern Kentucky University’s Salmon P. Chase College of Law. “The court has now made it clear that Title VII’s anti-retaliation provision prohibits employers from retaliating against employees who engage in protected activity by inflicting injuries on people close to the people who engaged in the statutorily protected activity.”

The trend also applies to retaliation claims filed under the Fair Labor Standards Act. In March, the court ruled 6-2 in Kasten v. Saint-Gobain Performance Plastics Corp. that the anti-retaliation provision of the FLSA applies to an employee’s oral complaints, as well as to written versions.

In a majority opinion by Justice Stephen G. Breyer, the court reasoned that the phrase “filed any complaint” in the statute covered oral complaints as well. “An interpretation that limited the provision’s coverage to written complaints would undermine the act’s basic objectives,” the court said.

In the case, petitioner Kevin Kasten was fired after telling his employer that the company illegally placed time clocks between the area where workers don and remove protective gear and where they carry out assigned tasks. The location kept workers from receiving credit for time they spent putting on and taking off work clothes. The FLSA provides minimum wage, maximum hour and overtime pay rules.

The court added that limiting “the scope of the anti-retaliation provision to the filing of written complaints would also take needed flexibility from those charged with the act’s enforcement. It could prevent government agencies from using hotlines, interviews and other oral methods of receiving complaints.”

In dissent, Scalia said that the statute should have been interpreted according to the plain meaning of the word filing.

In both instances the court has “recognized the importance of the anti-retaliation provision and has interpreted it rather broadly,” Rosenthal says.

But employer advocate Rae Vann, general counsel for the Equal Employment Advisory Council, who filed an amicus brief in support of North American Stainless, believes the court interpreted the statute too broadly.

“The statute on its face does not provide for a cause of action for those who have not engaged in protected activity,” she says. “The decision is problematic because it did not provide clear-cut guidance as to what types of relationships trigger the statute.”

“However,” Vann says, “I am not surprised that the court decided the case the way it did because the decision is one in a series of cases in which the court has expanded federal protections for retaliation plaintiffs.”

The court’s retaliation decisions are more plaintiff-friendly than its recent decisions involving other underlying discrimination claims like race, sex, age or disability. For example, the court imposed high hurdles for race- and gender-based claims stemming from pay differentials in 2007’s Ledbetter v. Goodyear Tire & Rubber Co. And in 2009 the court, in Gross v. FBL Financial Services, made it difficult for employees to pursue Age Discrimination in Employment Act claims when there are mixed motives for the employer’s adverse actions.

“For a court that at times has issued anti-employee rulings in the discrimination arena, the court has been protective of employees in the retaliation area, and surprisingly so,” says Michael L. Foreman, director of the civil rights appellate clinic at Penn State’s Dickinson School of Law.

In addition, retaliation claims lack politically potent wording. “The terms racist and sexist are loaded,” Fore man says, “while nearly everyone understands that an employer shouldn’t try to get revenge just because some one complains of race or sex discrimination.”

Schnapper, who has argued more than 15 cases before the court, says that in retaliation claims, “all the justices seem interested in protecting the right to access federal statutory protections. Enforcing the law is the business of the justices.”

“This court—conservative and liberal justices both— has accepted the argument that individuals should have unfettered access to assert statutory protection and the right to have their day in court,” says Foreman, who authored an amicus brief on behalf of the National Employment Lawyers Association in support of Thompson.

Among the court’s other recent pro-employee retaliation decisions are:

• Gomez-Perez v. Potter (2008). An employee can bring a claim of retaliation under the ADEA.

It’s likely that the courts will see even more retaliation cases. “The Thompson decision will invite more litigation and creates an opportunity for more lawsuits to be brought,” Vann says.

“The [Supreme Court] has realized,” Foreman says, “that if you don’t protect the right to complain about rights violations, then the underlying right becomes meaningless.”