Balance of power: Money and inequity in the judicial system 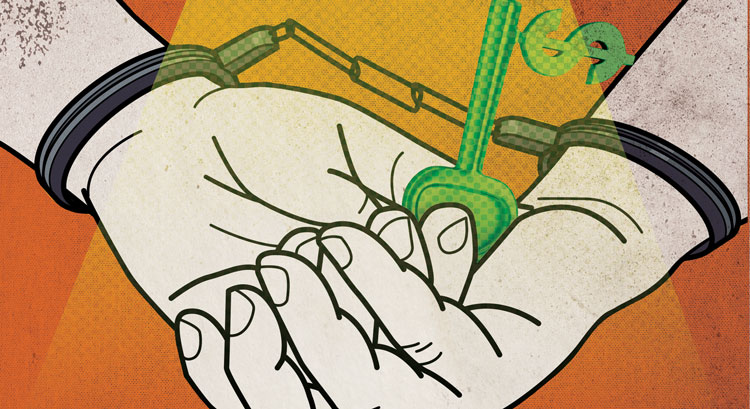 Looking back, in many ways 2008 was a remarkable year. The United States elected its first black president; the global economy plunged into the worst recession since World War II; and a prostitution scandal torpedoed New York Gov. Eliot Spitzer’s rising star.

This was long before the #MeToo movement, and Spitzer wasn’t the only powerful man involved in a lurid sex scandal in 2008.

That year, R&B star R. Kelly and multimillionaire financier Jeffrey Epstein also made news—both over allegations of sexual predation of women and underage girls. Kelly and Epstein escaped real punishment despite overwhelming evidence against them. Epstein pleaded guilty to state charges for soliciting prostitution and served only 13 months in a Palm Beach County jail—most of it on work release. Kelly was acquitted of child pornography charges at his Chicago trial after witnesses refused to testify.

Fast-forward more than a decade, and Kelly, Harvey Weinstein and other powerful men now face a reckoning. The one-two punch of the #MeToo movement plus dogged investigative journalism has propelled these cases into the spotlight. Kelly is facing federal and state charges that include racketeering, conspiracy and aggravated sexual abuse of underage girls in New York and Chicago. Epstein, before dying by suicide in August, faced, sex trafficking charges in the Southern District of New York for what federal prosecutors call “a yearslong scheme to sexually abuse underage girls.” ”

These men allegedly used money, influence and intimidation to escape criminal repercussions or obtain leniency, and it’s taken years of investigations and tenacity for a full public accounting. They aren’t the first wealthy men—in politics, finance, the arts—to have received special treatment because of who they are, how much money they have or whom they can buy off. And they won’t be the last. Despite the rule of law in this country, it’s axiomatic that money can often buy freedom. Money can buy good lawyers, investigators and resources needed to mount a vigorous defense.

Just ask Alex Acosta, who as U.S. attorney for the Southern District of Florida in 2008 supervised Epstein’s notoriously lenient plea deal and later blamed the decision on a “yearlong assault on the prosecution and prosecutors” by “an army of legal superstars.”

In contrast, at criminal courts across the country, poor defendants can’t afford competent counsel; many succumb to unfavorable plea deals for financial reasons; and public defenders are underresourced and overworked. There is a de facto dual justice system in the United States—one for the well-off and one for the poor—and it undermines our commitment to the rule of law.

Anyone who has a passing familiarity with the U.S. criminal justice system isn’t shocked to hear the wealthy often escape punishment or receive lighter sentences, while the poor—often minorities—are disproportionately incarcerated and more harshly sentenced. In fact, equal justice under the law is one of the greatest challenges to American democracy, along with access to justice.

A promise of equality

To be fair, the United States is not by a long shot the only nation grappling with justice inequities based on money, politics, race or religion.

We are, however, a nation that touts the rule of law as a foundational block of our democracy, exporting the ideal to the world while often failing to live up to it.

We’ve seen what happens when the rule of law is abandoned or gutted. When authoritarian regimes dismantle legal structures, protections disappear, elections are delegitimized, freedoms are lost and human rights suffer.

Here, on our own turf, we have watched decades of unjust sentencing and draconian criminal laws create a crisis of mass incarceration unparalleled in the Western world.

We know that the rule of law can be crushed when countries like China target and torture lawyers and dissidents. It can be subtly dismantled when nations like Turkey and Poland systematically erode an independent judiciary. Yet in the U.S., over multiple administrations, we’ve witnessed the party in power reorder rules or stonewall judicial nominations to ensure the federal judiciary reflects a certain political ideology.

The equality promise of this country has always been aspirational, and over centuries of tempering, the bedrock of our justice system remains anchored in the rule of law. What may set America apart is constant scrutiny and recalibration efforts when inequities swing too far. Right now, strict scrutiny is being applied to access-to-justice issues, immigration policies and unjust criminal laws that destabilize families and penalize the poor. This won’t balance the power and money advantage in one fell swoop. But advocates and activists are working to hold the powerful accountable, and continued agitation seeking “justice for all” is a step in the right direction.

The online version of “Balance of Power” was updated to reflect that Epstein died by suicide in August, after the ABA Journal’s print deadline.