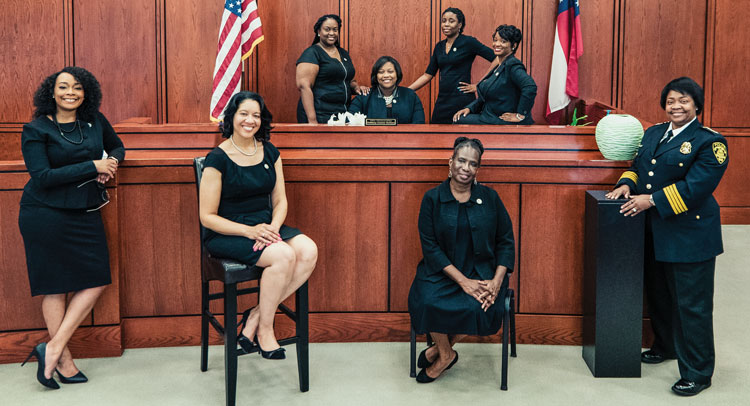 Having black women account for the entirety of the municipal court staff wasn’t intentional, says Judge Sellers, a trial attorney who was appointed by the mayor and approved by the city council to a four-year term.

“It happened very organically because we all were hired in a different manner,” she says. “Regardless of our race and gender, we all rose to the top.”

Employing nontraditional approaches, a young person in court for fighting might be required to create a life plan and be assigned guidance to help reach life goals. There is also a pretrial diversion program that provides resources, such as counseling and parenting classes, to divert defendants from further negative contact with the system. And every defendant is provided a public defender for his or her first appearance, something that doesn’t always happen in criminal court.

“The ultimate goal is to reintegrate people back into our community. We want productive citizens,” Sellers says.

Black women lawyers have made headway and headlines in recent election cycles. In November, 17 black women were elected to judgeships in Harris County, Texas, which includes Houston. And Aaron Ford became attorney general of Nevada in January 2019 and has assembled a team of female leaders.

“It’s amazing that it’s never happened before,” Sellers says. “I think that African-American women were always special, but given the current political climate, I think that people are now recognizing it. I think the time is absolutely right for it.”

Such examples of underrepresented groups advancing in leadership roles could result in more creative solutions to reduce crime and incarceration numbers, says Joseph Drayton, president of the National Bar Association and a partner at Cooley LLP in New York City.

“The goal is to see the innovation that comes out of it around some of the implicit biases some municipalities across the country face. It should not be the same and reduced to some degree,” he says. “Also, if the court system is well-run, it will be a testament to the fact that women leaders should be out in the forefront more and get more leadership opportunities; not just in criminal justice systems, but within the legal community at large.”

This article was published in the April 2019 ABA Journal magazine with the title "The Next Wave."