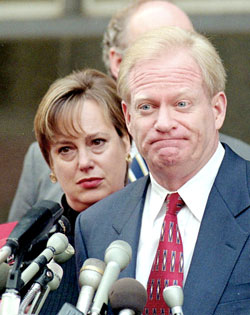 If setting limits on the amounts of campaign contributions is supposed to keep candidates for office from falling prey to corruption, then Arizona’s 1986 attempt to do so failed miserably.

Almost as soon as Arizona tried to rein in campaign donations, state government began to resemble a sort of rogues gallery, as dozens of state legislators, lobbyists, political activists and even two governors were criminally charged or civilly sued in a series of big-bucks corruption scandals.

By 1998, voters had their fill of the mess and approved Arizona’s Citizens’ Clean Elections Act. The scheme, unique when it passed, enables candidates to forgo financing their own campaigns in favor of state grants, which can include additional matches to enable them to keep up with better-heeled, privately supported opponents.

The law, according to a voter information brochure, was supposed to release elected officials “to represent the best interests of all the citizens, not just the large financial contributors who can trade their cash for political support.”

Now a little more than 12 years later, the program faces a court challenge from a half-dozen candidates who relied on their own fundraising instead of the grants, as well as two committees that want to spend their own money — independent of office seekers — to support or oppose candidates. The privately supported plaintiffs complain the public matches damage their First Amendment free speech rights by effectively forcing them to compete against the state for dollars once it starts doling out the matching funds to their opponents.

The arguments come a little more than a year after the court’s controversial decision in Citizens United v. Federal Election Commission, in which the justices struck limits on independent election spending by corporations and unions as First Amendment violations.

Critics of Citizens United wonder whether the justices are prepared to let another shoe drop in Arizona Free Enterprise. The trial court had struck the Arizona law, but the San Francisco-based 9th U.S. Circuit Court of Appeals reversed, holding that the law didn’t burden speech.

But in an unusual move the Supreme Court in June wiped out the 9th Circuit decision and reinstated the trial judge’s order blocking distribution of the matches for the November elections. At the same time, the court urged all sides to quickly file their cert petitions, and on Nov. 29 agreed to hear the case.

The outcome could affect campaign finance for decades, with Citizens United calling the tune through its heavy reliance on the First Amendment. At the same time, plaintiffs gripe that the state itself is putting a thumb on the free speech scale by trying to distribute money evenly among competing candidates and committees.

“These same people have been bringing these kinds of cases for decades,” says lawyer Monica Youn of the Brennan Center for Justice in New York City, which is defending the law for the nonprofit Arizona Clean Elections Institute Inc. “Courts had routinely turned them aside. Now they seem to be railroading them through.”

Few would dispute, however, that Arizona’s record was less than stellar on money’s role in political corruption before voters tried to fix it with public matches. The 1986 individual contribution limits of $200 for legislative candidates and $500 for statewide office hardly attracted politicians’ attention.

In 1988, Gov. Evan Mecham was charged with fraud and perjury for hiding a campaign loan. He was impeached and removed from office. Next, the savings and loan scandal prompted an ethics investigation of both the state’s U.S. senators, who had received contributions from S&L kingpin Charles Keating.

Then came the AzScam investigation, where seven legislators got nailed on video accepting campaign contributions and bribes to support gambling legislation. In one of the scandal’s memorable moments, Rep. Don Kenny stuffed $55,000 in cash into a gym bag after jokingly asking, “Are you sure there are no hidden cameras up there?” In all, 21 people were charged, including lobbyists and political activists.

Bringing up the rear was Gov. J. Fife Symington, who resigned in 1997 after he was convicted on seven counts of filing false financial statements. He was sentenced to 30 months in prison, but won a new trial on appeal. He received a presidential pardon before the second trial began.

CLAIMS OF A CHILLING EFFECT

Despite that extensive record, plaintiffs in the match case insist that the law unconstitutionally aims to level the playing field between the haves and have-nots. They say it chills their speech by deterring them from raising and spending money, lest they reach amounts that can trigger release of matching funds to their opponents.

Participation in public financing is voluntary, and candidates who go that route relinquish the right to raise private money. Candidates who want to use state money must show viability and sufficient voter support by initially raising on their own $5 “qualifying contributions,” ranging from 200 to 4,000, depending on the office sought. Qualifying candidates then receive a lump sum to begin their campaigns.

The matching funds at issue kick in when a privately financed candidate outspends an opponent, making the opponent eligible for a match to make up the difference. So if the private candidate wants to keep pace, he or she needs to raise even more.

Public matches appear to be catching on elsewhere, making the issue much larger than the Grand Canyon State. Though Arizona was the first to enact a public financing system that matches private money, nine other states have since adopted similar regimes, and at least another five have considered matches, as has Congress in federal elections.

“The impact will shape pubic financing in the future,” says William R. Maurer, a Seattle lawyer representing the plaintiffs for the Institute for Justice, a Virginia-based libertarian public interest law firm. “Will it be a system that drives private money out of our elections by burdening the candidates?”

Youn takes a more cynical view of the plaintiffs’ motives.

“They’re asking for a right to speak without reply,” she says. “To say publicly financed candidates have to be helpless is an absurd argument.”

The 9th Circuit panel wasn’t swayed by either the plaintiffs’ facts or the legal authority they cited. Three of the candidate-plaintiffs testified that the law chilled their speech to the point where they either declined to raise money or curtailed their spending until just before the election in an attempt to reduce the effects of any matches awarded to their opponents. No plaintiff, however, could cite a specific instance where his or her speech was chilled.

The evidence also showed that two other plaintiffs remained willing to spend despite the matches. The sixth, though claiming that the matches also chilled his speech, couldn’t recall whether his own efforts even had triggered a match to an opponent. One of the independent groups, the Arizona Taxpayers Action Committee decided to remain silent in order to avoid a match, but only had $52.72 cash on hand to spend anyway. “[T]he burden that plaintiffs allege is merely a theoretical chilling effect on donors who might dislike the statutory result of making a contribution or candidates who may seek a tactical advantage related to the release or timing of matching funds,” wrote Judge Atsushi Wallace Tashima.

The plaintiffs also hope to get some mileage from the high court’s 2008 decision in Davis v. FEC, which struck a singular provision in federal law called the “millionaire’s amendment.” The section allowed a privately supported candidate to asymmetrically triple the amount of contributions normally allowed if an opponent using personal funds exceeded a threshold sum. The opponent remained subject to normal contribution limits. But no public money was involved.

“The Supreme Court was reacting to that asymmetry,” Youn says.

But, says plaintiff lawyer Maurer, government action is key, whether it takes the form of direct public subsidy, or simply enables candidates to find additional money on their own.

“It’s important because it has the same constitutional harm,” he says.