Catch up with tech or lose your career, judges warn lawyers 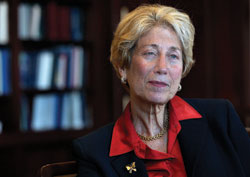 Federal judges are becoming much more sophisticated about technology—and they’re growing increasingly impatient with attorneys who are failing to keep up.

Indeed, U.S. Magistrate Judge James C. Francis of New York’s Southern District—one of a panel of four “cyberstar” federal judges who spoke on the future of law and technology at LegalTech New York 2014—was among the most concerned regarding lawyers who are clueless about the latest in technology.

Francis said he sees technological advances like e-discovery as so critical to the courtroom that he views attorneys who are unaware of its nuances as essentially engaging in a slow career suicide.

The judges’ panel was one of the most popular sessions of LTNY 2014, attracting more than 2,000 attendees. Other speakers included:

• U.S. District Judge Shira A. Scheindlin of the Southern District of New York.

Facciola agreed wholeheartedly with Francis, adding that he finds it irritating to hear arguments from e-discovery-ignorant lawyers regarding the prohibitive cost of a specific type of discovery.

Too often, Facciola said, he is forced to endure the opening salvos of such arguments while already knowing the attorney has no idea what he or she is talking about, and already knowing that the e-discovery application in question is actually much more reasonably priced than the attorney is attempting to represent.

Facciola said some of the country’s most competitive law firms already realize that technological ignorance is (and will continue to be) a mushrooming vulnerability in the courtroom. Not surprisingly, many of these firms are already taking steps to weed out their tech-ignorant from their tech-savvy.

Facciola put it bluntly: Why hire a lawyer who doesn’t even have the technological competence to complete simple, everyday tasks like converting a Microsoft Word document into a PDF?

Added Francis: “The absence of technical knowledge is a distinct competitive disadvantage.”

The judges also expressed concerns with lawyers who regularly leave behind unsecured laptops and similar computer devices in airports and other locations across the country. Those devices are often brimming with confidential data from perhaps dozens or even hundreds of clients.

The problem is especially troublesome given that attorneys, like the general populace, are using smartphones and tablets for both personal and business matters, Scheindlin said. That’s a major change from a decade ago, when most attorneys used a desktop for work and only needed to secure a laptop outside of the office.

These days, with millions of smartphones and tablets being toted around, leaving behind the secrets to your Fortune 500 client’s upcoming defense strategy tucked away in a sneaker while you take a dip in the ocean is an all-too-common nightmare scenario, Scheindlin said.

Meanwhile, Francis said he is getting much tougher on lawyers who come before his court requesting that subpoenaed and other evidence in electronic form be converted to basic TIFF images before it’s handed over.

Attorneys have often easily won favorable rulings on such requests, based on their protests that releasing the original, interactive documents would reveal proprietary information.

But these days, Francis said, before granting such conversion requests he is now pressing attorneys to conclusively prove to him that releasing the documents in their original form would actually cause sensitive client data—that is irrelevant to the case—to be exposed.

The reason: Reducing interactive documents to TIFF images strips out the ancillary data and metadata e-discovery software needs to quickly scan through hundreds of thousands of documents, Francis said. Needlessly stripping out all those digital navigational aids is simply too much of a burden on the legal system, he said.

This article originally appeared in the April 2014 issue of the ABA Journal with this headline: “Learn or Lose: Catch up with tech, judges tell lawyers.”