Chicago Cubs face a variety of lawsuits over Wrigley Field 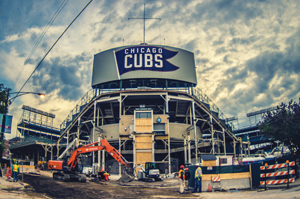 Photo of Wrigley Field under construction by Joshua Mellin

"This is gonna be the year."

It's the mantra Chicago Cubs fans have started nearly every season with since the team won its last World Series—in 1908. But if 2015 is, finally, the year, fans better get out their scorecards to stay abreast of a slew of lawsuits that may affect where and how they see home games played at historic Wrigley Field.

The suits all center on $575 million in renovations to the historic ballpark proposed by the team's owners, which commenced at the start of the off-season last October. The Ricketts family purchased the Cubs in 2009 and has been engaged in a long-running dispute with owners of nearby buildings who claim these plans—which include erecting a new 2,400-square-foot video scoreboard and adding LED signs—will unlawfully obstruct views from the lucrative "Wrigley rooftops," where seating, food and drinks offer an alternative spot for fans to watch live Cubs games.

A 20-year agreement that's binding through 2023 has the rooftop owners paying 17 percent of their annual gross revenue to the Cubs in exchange for, among other things, not having their views obstructed. When the Ricketts family announced last spring that it planned to go ahead with the controversial renovation plans that could hinder those views, the lawsuits came soon after.

In January, the rooftop owners sued the Cubs organization in a Chicago federal court over a variety of claims relating to the proposed renovation of Wrigley, including antitrust violations, deceptive practices, defamation and anticipatory breach of contract. The plaintiffs are accusing the team of violating the 20-year revenue-sharing agreement and other anticompetitive behavior. The rooftop owners claim that the Cubs, believing rooftop businesses were driving down ticket prices inside Wrigley, had suggested a price-fixing operation. When the rooftop owners declined, the team proposed new outfield signage to strong-arm owners into selling their properties or risking obstructed views.

"The Cubs will vigorously contest this lawsuit and move forward confidently with the Wrigley Field expansion construction project, which is well underway," said the Cubs' attorney, Andrew A. Kassof of Kirkland & Ellis, in a statement issued after this suit was filed. "Wrigley Field's expansion and renovation is in the best interest of the team, its fans, Major League Baseball and the city of Chicago."

A separate complaint against the city by the same rooftop owners also claims that a change to the signage plans approved by the commission—supposedly to keep the team on track to earn a $75 million tax credit—strategically blocks the views of specific rooftops whose owners refused to sell to the Ricketts family.

As opening day nears, it's likely this won't be the last legal tug of war over who has the rights to the views at the ballpark. Whatever the outcome, if the Cubs are on track to an elusive title by season's end, you can bet it'll be second-page news.

This article originally appeared in the April 2015 issue of the ABA Journal with this headline: "For It's One, Two, Three Lawsuits … at the Old Ballpark: As opening day nears, the Chicago Cubs face a variety of lawsuits over Wrigley Field."