Christo's public art installation continues to be ensnared in the courts 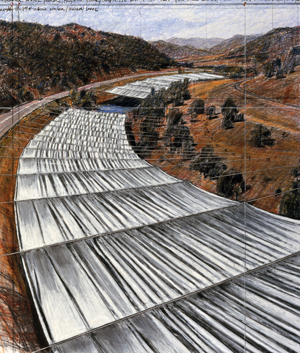 It seemed like it might finally be over, but a long battle between environmental artist Christo and a group opposed to his planned Over the River project—which would drape enormous swaths of fabric across portions of Colorado’s Arkansas River—is dragging on.

Rags Over the Arkansas River filed a motion in late February for the Colorado Court of Appeals to rehear an appeal to a lawsuit filed against Colorado Parks and Wildlife, one of two agencies that approved the project. In a recent appeal, which was overruled Feb. 12, appellate judges told ROAR that while the agency acted unlawfully in bypassing normal protocol, it was not enough to halt the project. ROAR filed a subsequent appeal in early

April challenging a federal district court ruling that upheld the Bureau of Land Management’s authorization of the project. The opposition group, founded almost a decade ago, has managed to delay the proposed installation since it was initially granted federal approval in 2011. ROAR and others opposed to Over the River say it will cause problems ranging from road obstruction during installation to impacts on wildlife—most notably bighorn sheep that live near the river. An environmental impact statement conducted by the BLM in 2011 ruled in favor of the installation.

“ROAR believes the court overlooked record evidence of prejudice arising from the timing of the ‘cooperative agreement,’ ” the group said in a statement announcing the February motion. “The court [also] overlooked language in the permitting rule … that would have necessarily required [denial of] the permit because of the project’s significant adverse impacts.”

The $50 million project, to be financed entirely by the artist, includes eight suspended panels of silvery, translucent fabric totaling 5.9 miles along a 42-mile stretch of the river. Christo is famous for large-scale, temporary exhibits and pre-installation controversy. Recent notable works include the wrapping of the German Parliament building in 1995 and The Gates—a path of orange frames and fabric installed in New York City’s Central Park. The Bulgarian artist began scouting locations for the project with his late wife and collaborator, Jeanne-Claude, in 1992. He says on his website they chose the Arkansas River because its banks were high enough for rafters to still use the waterway.

Christo says the installation would ideally run for two weeks in the month of August. Whether that August will be in 2015, a later year or perhaps never is anyone’s guess at this point.

This article originally appeared in the June 2015 issue of the ABA Journal with this headline: “Over the River and Through the Courts: Public art installation continues to be ensnared in the courts.”