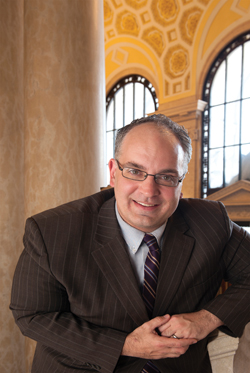 Western Massachusetts bankruptcy attorney Justin H. Dion caught a bit of ribbing three years ago when, as a promising senior associate, he informed his law firm colleagues that he would be leaving the partner track to teach full time at a local college.

“The premise was: ‘You’re too young to retire; you can’t sail off into the sunset. Your career is still budding; you can’t sit in an ivory tower as a professor,’ ” Dion says.

At 37, Dion is far from retirement. And as a professor in the legal studies program at Bay Path College, where he directs the bankruptcy clinic he helped establish two years ago, Dion’s job demands are different from his full-time practice at the Springfield, Mass., firm Bacon Wilson, where he is still an associate. “But I’m essentially just as busy now as I was before,” he says.

He is quick to admit that his decision to give up a solid shot at partner to develop and run the clinic—which pairs indigent clients from legal aid agencies with undergraduate students from the Longmeadow, Mass., women’s college to resolve the clients’ financial crises—took some soul searching. He was newly remarried and the father of three young children (now four). And his wife was just finishing law school.

Dion, a 2000 graduate of Western New England University School of Law with a master’s degree in psychology, developed a passion for pro bono service as well as teaching early on in his law career. For many years, he juggled his practice with teaching law part time at Bay Path, all the while handling at least one or two pro bono cases through various legal aid groups.

“At the firm, although they were very supportive of pro bono activities, I still had billable-hour obligations,” Dion says. “My thought was, with this clinic I would still be able to teach, I would still be able to practice some law. But I could really focus my energy on this pro bono initiative and help people who need it, especially in these times when there’s such a demand for bankruptcy assistance.”

The seed for creating the Bay Path College Bankruptcy Clinic was planted when Dion was interviewing for a full-time teaching position with the college’s legal studies department chairman, attorney John Woodruff, who mentioned his long-held desire to institute some kind of clinic at the college.

Since fall 2010, Dion says, students under his supervision have helped about two dozen individuals and families get a fresh financial start—and prevented many of them from becoming homeless—through the clinic, which is open to the top students who have completed Dion’s class in the fundamentals of bankruptcy law. Clients are prescreened through the federally funded Massachusetts Justice Project, which bundles pro bono cases for Dion’s review before each student is assigned a client at the start of a semester.

Students essentially act as Dion’s paralegals. They meet with the client to explain the bankruptcy process, collect all necessary financial information, review the client’s assets, prepare the Chapter 7 bankruptcy petition, and accompany Dion to the federal courthouse in Springfield to file the petition and obtain the hearing date. By the end of the semester, they complete the process alongside Dion and the client at the 341 meeting of creditors.

Legal studies major Jessica Morris, 21, says having a hand in the “counseling part of the law” was a memorable clinic experience for her last fall when she took on the case of a 93-year-old woman.

“She was so afraid. She kept saying she felt like she was on her way to the guillotine. … She was crying about it because she thought [bankruptcy] was something so bad,” Morris says. “Being able to work with her and talk to her more about it, and let her see that it’s not bad, and having her be so grateful at the end, … I felt accomplished after that.”

While Dion departed from the partner track (and a heftier salary) the gratification he sees from the clinic’s pro bono clients more than makes up the difference, he says.

“It’s that personal gratitude at the end when we’re walking out of the hearing and the client looks back with tears in their eyes saying, ‘I can’t believe how much you’ve done for me.’ You know that you’re doing something positive.”