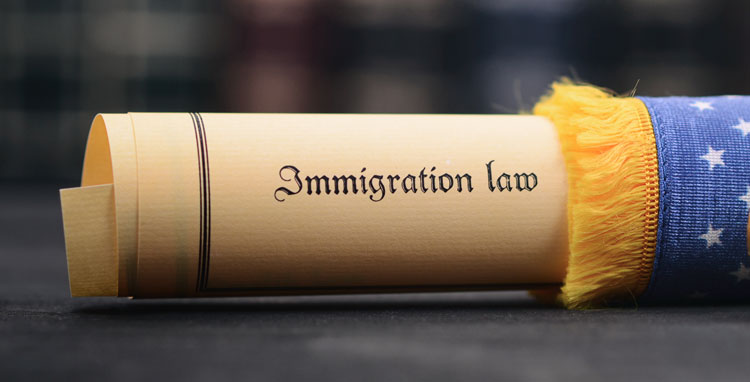 At the ABA House of Delegates meeting in San Francisco in August, Massachusetts Bar Association delegate Kevin Curtin asked the delegates to consider the position today’s asylum-seekers find themselves in.

“A person comes to our borders, legitimately seeking asylum from, say, political or religious persecution,” said Curtin, a prosecutor for Middlesex County, Massachusetts. “We then lock her up. We might separate her from her children. And then, we prevent her from having access to counsel. … We wouldn’t do that to what my grandmother would call common criminals.”

That’s why Curtin was at the podium promoting the ABA Commission on Immigration’s Resolution 121D. The resolution asks Congress and the Department of Homeland Security to restore a President Barack Obama-era policy that made it easier for immigrants to be released another way. In the friendly environment that is the House floor, it passed without debate or notable opposition.

In fact, all six of the policies that the Commission on Immigration brought to the 2019 ABA Annual Meeting—Resolutions 121A-F—sailed through the House. And although you’re not likely to see all of them in headlines, commission chair Wendy Wayne says they have an important job. Making them official ABA policy permits the ABA Governmental Affairs Office to start lobbying for major changes in the immigration court system aimed at increasing access to due process, efficiency, judicial independence and adequate resources.

“These are nonpartisan, core values for the ABA and the United States justice system, and they should apply regardless of anyone’s politics,” said Mary Ryan, who was co-chair of the ABA’s Working Group on Unaccompanied Minor Immigrants when she introduced the resolutions on the House floor.

The resolutions spring from—and codify as ABA policy—a report put out in March by the commission, Reforming the Immigration System. It gives the ABA’s best recommendations about how to improve the system for determining whether an immigrant should stay in the United States, and it’s an update to the commission’s 2010 report of the same name. The newer version makes several new recommendations, some of which address the increased politicization of immigration policy. Those recommendations needed to become ABA policy before the organization could throw its weight behind them.

The resolution that was perhaps most directly related to current headlines was Resolution 121A, which concerns the power of U.S. attorneys general to refer immigration cases to themselves and decide them unilaterally.

“In this administration, it has been used a lot, and to overrule decades and decades of case law,” says Wayne, who’s also director of the immigration impact unit of Massachusetts’ Committee for Public Counsel Services, an indigent defense organization.

The same power was at issue in Resolution 121D, the resolution that Curtin introduced. In April, U.S. Attorney General William Barr ruled in Matter of M-S- that immigration judges may not consider bond requests from asylum-seekers who’ve established a credible fear of persecution. The resolution therefore calls on DHS to use its discretion to release them on humanitarian grounds, in the way that it did under Obama, and codify that policy as a regulation.

Other resolutions in the series were on quieter issues that were no less important to reformers. Resolution 121B calls on the federal government to relax a 30-day deadline for appeals when the immigrant is representing him- or herself. This is common in immigration court, where there is no right to a government-funded attorney. Resolution 121E, recommending that federal appeals courts expand their pro bono programs for immigrants who are representing themselves, passed on the consent calendar.

And the House also passed Resolution 121F, which calls on Congress and the Justice Department to change rules that currently penalize immigrants who appeal their cases by taking away their options for voluntary departure. Voluntary departure is considered a benefit in immigration law because it permits immigrants to return to the United States legally sooner than they could if they had been deported.

The final resolution in the series was Resolution 121C, which calls for a group of policies aimed at helping the immigration courts function better. This includes restoring immigration judges’ ability to close, delay and terminate cases—revoked in a series of decisions by then-U.S. Attorney General Jeff Sessions—and restoring the policy against deporting immigrants who haven’t committed crimes. The resolution also calls for systemwide electronic filing (currently, e-filing is a pilot project in only five of the 63 immigration courts) and giving judges civil contempt powers. Finally, it calls for increased efforts to hire immigration judges from diverse professional and personal backgrounds.

“One day the rule is you can go to an immigration judge to get bond, and the next day you can’t,” said Ryan, a partner at Nutter McClennen & Fish in Boston. “We don’t know what’s going to happen tomorrow. So that’s why we need this.”