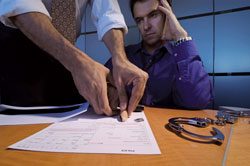 In early 1993, Houston police officers arrived at the home of Genovevo Salinas to question him about the shotgun murders of two brothers outside a party a few weeks earlier. Salinas accompanied the police to the station house, where he consented to answer questions for nearly an hour in a noncustodial setting. But it is the one question he did not answer that has landed his case in the U.S. Supreme Court.

With the court’s landmark 1966 ruling in Miranda v. Arizona enshrining the rights of suspects in police custody, and decades of police shows on TV repeating the familiar warnings, “the right to remain silent” is seared into the public consciousness.

“We can all cite our Miranda rights,” says Mikah K. Thompson, an adjunct professor of law at the University of Missouri-Kansas City. “We know we have the right to remain silent.”

But there are times when silence can be used against a defendant in court. For example, under settled Supreme Court rulings, prosecutors may use a defendant’s silence during police questioning to try to impeach his testimony if he takes the stand.

However, one unsettled question is whether prosecutors may use in their case-in-chief a defendant’s silence during police questioning before an arrest and before being “Miranda-ized”—even when the defendant does not take the stand in his own defense. Federal courts of appeals and several state high courts are divided on the issue.

The Supreme Court will take up that question in Salinas v. Texas, to be argued April 17.

“This ruling could really have a significant effect on the states, as to how they assess the silence privilege and apply it at trial,” says Thompson, who has written on the topic. “And it’s really going to be significant for law enforcement officers in determining how far they can go.”

When the police approached Salinas at his home, he was generally cooperative, according to the briefs. He consented to a search of the residence. Asked about the presence of any guns, he told the officers that his father, who lived in the same home, owned a shotgun. The elder Salinas turned over the shotgun to the police, and Salinas agreed to go to the station house, ostensibly to provide fingerprints that might eliminate him as a suspect in the slayings of Juan and Hector Garza.

At the police station, Salinas was neither handcuffed nor placed in custody. He answered questions for nearly an hour about his relationship with the two victims and about his activities around the time of the slayings. Salinas answered every question but one—when the police asked him whether the shotgun from his home would match the shell casings found at the murder scene.

At that point, Salinas “looked down at the floor, shuffled his feet, bit his bottom lip, clinched his hands in his lap, [and] began to tighten up,” an officer later testified.

Ballistics tests confirmed that the shotgun did match the casings at the murder scene. Based on that and other evidence, Salinas was indicted in the two brothers’ deaths. (Though not particularly consequential for the legal question in his case, Salinas, now 41, managed to elude police for some 14 years before being arrested in 2007.)

After a mistrial, prosecutors at his retrial put more emphasis on Salinas’ silent response to the police question about the shotgun. “He didn’t want to answer that,” the prosecutor said in his closing statement. “An innocent person is going to say: ‘What are you talking about? I didn’t do that. I wasn’t there.’ He didn’t respond that way. … He wouldn’t answer that question.”

A jury convicted Salinas of murder and sentenced him to 20 years.

On appeal, lawyers for Salinas argued that the use of his pre-arrest silence violated his Fifth Amendment right that “no person … shall be compelled in any criminal case to be a witness against himself.” They called for extending the logic of the Supreme Court’s 1965 decision in Griffin v. California, which bars prosecutors from commenting on a defendant’s silence at trial, and its 1976 ruling in Doyle v. Ohio, that a defendant’s silence while he is in custody and has been given Miranda warnings may not be used at trial.

Both a midlevel state appeals court and the Texas Court of Criminal Appeals, the state’s highest for criminal matters, found no Fifth Amendment violation because, as the second court put it, “in pre-arrest, pre-Miranda circumstances, a suspect’s interaction with police officers is not compelled.”

Salinas is being represented at the Supreme Court by Stanford University law professor Jeffrey L. Fisher, who says that the discussion of Miranda rights surrounding the case was confusing the issue for pre-arrest, pre-Miranda silence.

“There is case after case in which the [Supreme] Court has said the right to remain silent applies to something other than custody,” Fisher adds, citing testimony before Congress and statements (and lack thereof) on tax forms.

A prosecutor’s use of a defendant’s silence during questioning compels the defendant to be a witness against himself because it leaves him no way to avoid incriminating himself, Fisher added in his brief.

“If he speaks, his words can be used against him,” the brief said. “And if he refuses to speak, the prosecution can argue that his silence is evidence of guilt.”

Texas prosecutors point to other Supreme Court precedents, including Jenkins v. Anderson, a 1980 decision holding that the prosecution could use evidence of a defendant’s pre-arrest, pre-Miranda silence during cross-examination of a defendant who takes the stand in his own defense.

“The Fifth Amendment privilege against compulsory self-incrimination is irrelevant to a citizen’s decision to remain silent when he is under no official compulsion to speak,” the Harris County district attorney’s office said in a petition-stage brief at the Supreme Court. That idea comes from a concurring opinion by Justice John Paul Stevens in Jenkins.

“If a citizen is voluntarily interacting with the police, whatever he says or doesn’t say is something we can use in evidence without damaging his Fifth Amendment rights,” says Alan K. Curry, the chief of appellate litigation in the Harris County district attorney’s office. “And the defendant would still have the right not to be compelled to implicate himself.”

Curry says prosecutors should be able to introduce evidence of “conduct” such as that displayed by Salinas when he declined to answer the question about the shotgun after answering an hour’s worth of other police questions.

“If someone acts remarkably nervous with regard to a particular question, that can be just as much a response as a verbal answer could be,” Curry says. “That is something the jury should be able to know.”

A 2005 article in the Hamline Law Review by Michael J. Hunter, then a recent graduate of Cleveland-Marshall College of Law, argued that most federal appeals courts that addressed the question of the admissibility of pre-arrest, pre-Miranda silence had gotten it wrong by ruling for the defendants.

“If there was no custodial interrogation, Miranda and the self-incrimination clause of the Fifth Amendment are simply inapplicable as a constitutional basis to exclude the admission of the evidence,” Hunter wrote in a piece cited by the Texas prosecutors.

A different view came in a 2012 article in the Virginia Law Review by Andrew J.M. Bentz, who graduated that year from the University of Virginia law school. Bentz traced the origins of the right against self-incrimination as part of an evolution away from a 13th century papal bull by Pope Innocent III requiring an oath to answer truthfully all questions from authorities.

“The Fifth Amendment provides individuals a way out of this cruel choice—remain silent without fear of contempt,” Bentz wrote.

John M. Schmolesky, a law professor at St. Mary’s University in San Antonio, Texas, says that some states’ constitutions or rules of criminal procedure prohibit the use of pre-arrest silence. But he says he agrees that a finding for Texas could inevitably broaden the tools of the police and prosecutors.