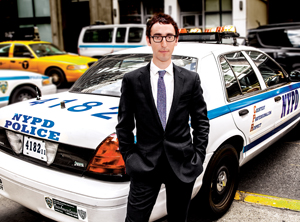 Nathan Wessler is heading an ACLU investigation into police use of new surveillance equipment. Photo by Len Irish.

Gone are the days when law enforcement had to hide behind highway signs to catch motorists or use plastic-cone-equipped listening devices to eavesdrop on suspects.

Thanks to modern technology, it's never been easier—or safer—for police officers to do their jobs. Automated license plate readers allow officers to catch speeders, search for stolen cars and track down fugitives. LPRs consist of high-powered video cameras that capture images of license plates and the software to read those images. They are synced up to databases so that the authorities can track every place a particular vehicle has been.

Meanwhile, a device called Stingray allows law enforcement officials to obtain all kinds of data from a cellphone without the owner even realizing it. Stingray impersonates a cell tower, tricking a mobile phone into sending its data. The trademarked product Stingray, a product by the Harris Corp., is the most well-known of a class of products known as international mobile-subscriber identity catchers. These products have come to be known generically as "stingrays" by those in the law enforcement community.

While 70 percent of local police departments use license plate readers, according to a recent RAND Corp. report, it's not entirely clear how popular Stingray is because law enforcement officials have been tight-lipped about its usage.

Although these tools are popular with police, they have led to lawsuits. Civil liberties groups such as the American Civil Liberties Union and the Electronic Frontier Foundation have raised privacy concerns about LPRs, while warning of the dangers of unlimited government tracking and retention of data relating to the movement of a person's vehicle.

In May 2013, the ACLU's Southern California chapter and the EFF filed suit in Los Angeles County Superior Court accusing the Los Angeles Police Department and the LA County Sheriff's Department of dodging previous requests for information as to how LPRs are used. Those records released were "inconsistent and did not include the full scope of records requested," states the petition for a writ of mandate to force the police departments to disclose additional records.

The LAPD and LACSD, however, maintain that they do not have to comply because investigatory records are exempt from the California Public Records Act.

LPR "data is investigatory, regardless of whether a license plate scan results in an immediate 'hit' because … the vehicle may be stolen, the subject of an Amber Alert or operated by an individual with an outstanding arrest warrant," the departments wrote in their response.

The data also has investigative use after the initial scanning process because it helps the LAPD solve a variety of serious crimes, the departments said. The court has not yet ruled on the departments' March motion for a denial of the writ.

The idea that the government could have such a blank check does not sit well with the ACLU. "With the broad penal powers the state already has, governmental use of LPRs is especially pernicious," says Brian Hauss, a fellow with the group's Speech, Privacy and Technology Project.

He cites U.S. v. Jones, a 2012 Supreme Court case that found installing a Global Positioning System device on a car to track its movements violated the Fourth Amendment. "The Supreme Court held that you have a reasonable expectation of privacy in your movements over a period of time," Hauss says. "The ability to track a person's movements over a period of time triggers the Fourth Amendment whether it's through GPS, cellphone data or a license plate reader."

Vigilant Solutions, one of the largest LPR manufacturers, calls the ACLU's entire position specious. Vigilant, based in Livermore, California, contends it has a First Amendment right to gather data that is in the public sphere. To that end, it has partnered with Digital Recognition Network, a Fort Worth, Texas, affiliate that maintains the data collected by LPRs and sells it to private companies, mainly repo men and loan collectors.

"The biggest misconception is that LPRs infringe on privacy," says Michael Carvin, a partner at Jones Day's Washington, D.C., office who represents Vigilant. "This is not private information. The whole purpose of license plates is to identify."

Carvin has filed First Amendment lawsuits in Utah and Arkansas challenging their LPR bans. The first suit, filed in Utah federal district court in February, was withdrawn after the state agreed to drop its ban. The second was filed in the Eastern District of Arkansas in May and remains open.

Both Carvin and Todd Hodnett, founder and executive chairman of DRN, point out that the ACLU has defended photographers' right to take pictures in the public space. "You can't use plate information to get access to someone's bank account," Carvin says. "All [DRN] wants to do is identify vehicles that are subject to repossession or for police investigations."

The ACLU points out the dangers of allowing private companies to access, and sometimes sell, the information taken from LPR databases. "Increasingly, [LPRs] are capturing drivers' locations outside church, the doctor's office and school, giving law enforcement and private companies that run the largest databases the ability to build detailed pictures of our lives," wrote Catherine Crump in the ACLU study You Are Being Tracked.

Yet Hodnett says DRN provides free access to its data to the National Center for Missing & Exploited Children. Private companies and industries pay for access, but only after being properly vetted and proving a permissible interest in obtaining license plate and VIN information under the law.

"If you're the lender that has loaned $75,000 on a BMW and you need our data because the buyer won't pay, then you already have all of the buyer's info," Hodnett says. "We're not telling them anything they don't already know."

Another major LPR manufacturer, PlateSmart, maintains that it does not share its data with private companies. Unlike Vigilant, which produces both hardware and software, PlateSmart produces its information through software only and relies on cameras already in place.

"Privacy has always been a major issue to me," says John Chigos, founder and CEO of PlateSmart, which is based in Oldsmar, Florida, near Tampa. "I wouldn't want my car on an open list of vehicles just because I happened to drive through an intersection once."

Unlike LPRs, the use of Stingray-type devices remains a mystery. The Associated Press reported in June that the Obama administration, citing national security, has pressured state and local police departments to not disclose any information concerning its use of stingrays and other eavesdropping methods.

In response, the ACLU has filed lawsuits demanding information from law enforcement in Sarasota, Florida, and Tucson, Arizona. In June, Circuit Court Judge Charles Williams of Sarasota threw out the group's suit due to lack of jurisdiction over a federal agency. Nathan Wessler, a staff attorney with the ACLU's Speech, Privacy and Technology Project, says the ACLU is appealing the decision.

"The stated justification is 'fighting terrorism,' " Wessler says. "But based on the records we've been able to obtain so far, it seems like local and state agencies are using it for run-of-the-mill investigations. There are zero counterterror or homeland security cases."

Wessler says that, according to what little information the ACLU has, stingray use is quite popular. "At least 38 agencies in 15 states have purchased their own stingrays, and there's an unknown number borrowing them." Melbourne, Florida-based Harris Corp., the largest manufacturer of the devices, declined to comment. The FBI, which is contesting the Tucson lawsuit, stated in its opposition to the ACLU's petition that forcing the agency to give up its information would "result in the FBI's inability to protect the public from terrorism and other criminal activity because through public disclosures, this technology has been rendered essentially useless for future investigations."

Wessler says he has not ruled out litigation challenging the constitutionality of Stingray itself. "It's an unsettled question whether these devices can ever be used in a way that's consistent with the Fourth Amendment," he says.