Dealing with Dobbs: ABA responds to the overruling of Roe with 6 resolutions 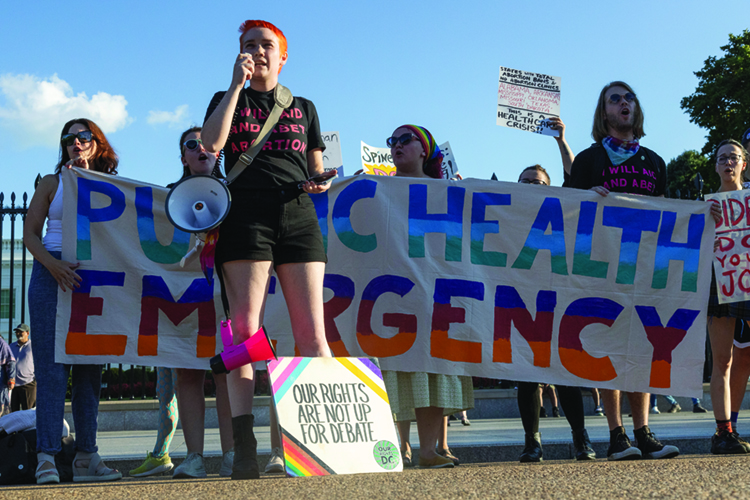 Protests took place outside the White House and around the country after the June 24 decision in Dobbs v. Jackson Women’s Health Organization. Photo by Bryan Olin Dozier/NurPhoto via AP.

Past ABA President Laurel Bellows stood before the House of Delegates in the final hours of the association’s annual meeting to implore her colleagues to adopt the first of six resolutions related to the U.S. Supreme Court’s decision in June that overturned Roe v. Wade.

Resolution 804 opposes establishing criminal and civil liabilities for individuals or groups that assist or support someone who is considering or seeking an abortion; procuring reproductive health care; or experiencing a miscarriage, stillbirth or adverse outcome during pregnancy. The measure also urges the repeal of existing statutes that impose criminal or civil liabilities for those actions.

“We are setting policy on which the ABA can build to assure that ordinary acts of daily life are not criminalized,” Bellows said. “This is criminalizing talking to your friend about her options. This is criminalizing and delaying very important medical response when a woman has suffered a miscarriage or is in a threat of harm or life because the people who would need to touch her at that moment don’t need to be worried about whether they, in fact, will be subjected to criminal charges.”

In September 2021, a law took effect in Texas that prevented abortions once a doctor detects a fetal heartbeat, typically at about six weeks of pregnancy. The measure also permitted private citizens inside or outside Texas to sue abortion providers and anyone else who helps a woman obtain an abortion. These citizens could potentially be awarded $10,000 plus court costs per illegal abortion if they are successful.

“How many of you have a cellphone with an Uber or Lyft app?” asked Juan Thomas, then chair-elect of the Section of Civil Rights and Social Justice, which filed all six resolutions shortly before the House met on Aug. 8 and 9. “Under certain interpretations of these laws, if you pay for an Uber for someone to go to a clinic to get advice or information about an abortion or reproductive choice, you could be aiding or abetting.”

The House overwhelmingly passed this resolution as well as its companion measures. No one spoke in opposition to any of them.

The Supreme Court ruled June 24 that there is no constitutional right to abortion in Dobbs v. Jackson Women’s Health Organization, a challenge to Mississippi’s ban on most abortions after 15 weeks of pregnancy.

Justice Samuel Alito, who wrote the opinion, also contended that “no such right is implicitly protected by any constitutional provision, including the one on which the defenders of Roe and Casey now chiefly rely—the due process clause of the 14th Amendment.”

Roe, decided in 1973, held that states can’t ban abortions before viability, the point at which a fetus can survive outside the womb.

In 1992, the Supreme Court reaffirmed this holding in Planned Parenthood v. Casey.

In the wake of Dobbs, many members of the legal profession have expressed concerns that the same reasoning that eliminates the right to abortion could put other constitutional rights at risk.

Resolution 805 responds to this by opposing legislation and regulations that restrict the right of individuals to access contraceptives or contraceptive care. It also urges governments to enact new measures that protect these rights.

Justice Clarence Thomas joined Alito’s opinion in Dobbs, but he wrote a concurrence “to emphasize a second, more fundamental reason why there is no abortion guarantee lurking in the due process clause”—there is no basis in the Constitution for the concept of substantive due process.

Thomas called on the Supreme Court to reconsider all its substantive due process precedents, including Griswold v. Connecticut, its 1965 decision that the Constitution protected the right of marital privacy against state restrictions on contraception.

“Who would have imagined that we would have to sit here and defend a woman’s right to get a contraceptive or to cross state lines in order to do that?” asked Mark Schickman, a CRSJ delegate to the House. “But as a result of the Dobbs decision, as a result of what’s happening in statehouses and governor’s mansions across the country … it is exceptionally necessary to do.”

Resolution 806 supports the passage of the Respect for Marriage Act or other federal legislation that codifies marriage equality for same-sex and interracial couples.

Thomas, in his concurrence in Dobbs, also urged the Supreme Court to reconsider Obergefell v. Hodges, its 2015 decision that the 14th Amendment protects the right to marriage between same-sex couples.

Same-sex marriages are not protected by federal law, and according to the resolution’s report, at least 25 states still have marriage bans that could go into effect if the Supreme Court overruled Obergefell.

Proponents of the resolution contend interracial marriages could also face risks in the future.

Resolution 807—which complements Resolution 804—opposes the criminal prosecution of physicians and health care providers who provide or attempt to provide abortions or who advise, help or support someone who is having an abortion.

The resolution asks governments to repeal and oppose laws that criminalize conduct by physicians and health care providers in con- nection with an individual’s decision to terminate a pregnancy or receive care for pregnancy complications. It also urges them to clarify that exist- ing laws cannot be used to prosecute physicians and providers for alleged crimes related to abortions.

In recent months, several states have either already banned or plan to soon ban abortion in most cases. Of these states, 13 had so-called trigger laws—laws that were implemented in anticipation of the fall of Roe. Bans took effect immediately in some states, including Arkansas, Missouri and South Dakota.

These laws target health care providers by making abortion a felony. Some allow exceptions in cases involving rape or incest, while others permit the procedure only when necessary to prevent serious injury or death to the mother.

Stop use of citizen lawsuits

Resolution 808 also responds to the potential harms of statutes such as Texas’ 2021 law, urging governments to repeal and oppose laws that provide enforcement authority and bounties to private citizens to “evade federal court review of the constitutionality of a law.”

Since the Texas law took effect, legislators have introduced at least 17 similar bills in 14 states and Puerto Rico, according to the resolution’s report.

“Another danger of this unprecedented enforcement structure is that it can be used in legislation concerning a wide range of substantive matters,” said Beth Whittenbury, who was then chair of CRSJ.

In July, California Gov. Gavin Newsom signed a bill that allows private parties to sue anyone who imports, makes, sells or distributes weapons banned for sale in the state.

The new law is reportedly the first in the nation to apply Texas’ citizen lawsuit model for abortions to gun sales.

“These laws invite a flood of claims that will overwhelm the judicial system,” Whittenbury said. “There is no limit on how many people can bring claims against a single defendant or how many claims can be brought. Private citizens may be encouraged to bring claims to obtain monetary awards, especially if the law criminalizes something they dislike.”

It suggests the laws require several provisions, including the completion of a privacy impact assessment before information is collected and the deletion of information when it is requested by the individual or no longer needed.

The resolution also urges these laws to prohibit data brokers from buying, selling or disclosing personal reproductive and sexual health information and prevents government officials or law enforcement from collecting it without a judicial order.

A number of ABA entities, including the Health Law Section, have launched initiatives to examine the legal implications of the Dobbs decision. In remarks to the House, outgoing ABA President Reginald Turner also mentioned the ABA’s new Law, Society and the Judiciary Task Force, which will address several legal issues, including those related to Dobbs, and will evaluate other developments involving the state of the judiciary in the United States. Past ABA President Linda Klein is chairing the task force.

The House considered and approved a number of other resolutions during their session, including resolutions geared toward gun control; opposing sharing of legal fees with nonlawyers; repudiating Russia’s invasion of Ukraine; and urging election security measures.