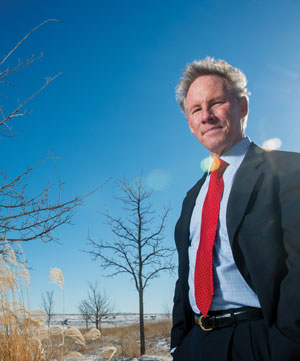 Alan Curtis: In prior-appropriation states such as Colorado, “water decrees are not worth anything if the water isn’t there.” Photograph by McCory James.

It's a classic case of ignoring a problem until forced to face it.

In the midst of a four-year drought, when the state had its lowest rainfall ever, California finally established a regulatory regime, the Sustainable Groundwater Management Act of 2014, to control who gets what groundwater.

Still in its infancy, the new law won’t have any real effect, California water lawyers say, until 2020 or 2021. Meanwhile, it’s a dangerous pumper-take-all frenzy—if you can find an overbooked driller to actually dig you a well.

Lawyers outside the state who specialize in environmental law and water rights are baffled by why it took California so long, when states such as Colorado have had water laws for 150 years, predating the state constitution. Water laws not only vary by state but are also governed by aquifer, groundwater and subsidence districts, as well as other state and county agencies.

Even in states where landowners own the water beneath their property, they’re not truly protected, as water does not respect property boundaries. The landowner with the longest straw wins. And in California, that’s perfectly legal.

Water law can be an overlapping crazy quilt that means, along with scarcity and the rise of fracking, that the field will provide work in perpetuity. “I’ve never seen more people talking about water law than they are now,” says water lawyer Sue Snyder, a partner at Vinson & Elkins’ Austin, Texas, office. The Lone Star State, the second-to-last Western state to regulate groundwater, has established its own set of county districts, groundwater management districts, aquifer districts and subsidence districts, many of which regulate the same aquifers.

Every few years the Texas legislature creates new water districts and laws, “which makes for a very disjointed regulatory scheme,” Snyder says. “We’ve had groundwater conservation districts on the books since the 1950s, but we are still figuring it out, still litigating takings cases.”

In 2012, the Texas Supreme Court confirmed the private ownership of groundwater in Edwards Aquifer Authority v. Day. “However, it clearly leaves the door open to regulation by groundwater conservation districts, including regulation that protects existing and historical use,” says Drew Miller of Kemp Smith in Austin, who represented the aquifer authority. “But just how far a groundwater district may go to protect historical use, especially at the expense of landowners with little or no historical use, is unclear.”

Miller represents local government entities fighting oil baron and former gubernatorial candidate Clayton Williams Jr., who is seeking to pump and transport 48,000 acre-feet (a measure of volume) of water from the Fort Stockton area northeast to the thirsty Midland-Odessa region for municipal and industrial use. The groundwater district denied the permit, the trial court upheld it, and the case is now on appeal.

There is no single federal standard to guide how water is allocated, says James O’Reilly, a professor at the University of Cincinnati College of Law. “Each state’s laws relate to the history of the agricultural powers that governed state legislatures.”

In some states, such as Idaho, it’s a farmer vs. farmer fight. In other states, it’s a more traditional farm vs. city battle. But the new players in the water wars—domestic and international energy companies extracting shale gas, a process known as fracking—have changed the landscape, in part by skyrocketing the price of water.

“Water regulatory regimes have not kept up to adapt to this new dynamic,” O’Reilly says.

Water lawyers across the country find it incredible that California does not require pumpers to measure the amount of water they extract. “It’s unusual for a state of the size and sophistication of California to have no code or legislation addressing the use of groundwater, which has been a mainstay in Florida for decades, if not hundreds of years,” says water and environmental lawyer Roger Sims, a partner at Holland & Knight in Orlando.

In Florida, water rights do not exist in perpetuity. Water-use permits have specified terms and must be renewed. They can be revoked by the issuing agency. Even legal pumpers with permits for a determined number of acre-feet can be forced to pump less if an aquifer is in danger. Pumpers violating permits can face substantial civil monetary fines, Sims says. And those who pump without a permit face possible criminal penalties.

Alan Curtis, who practices water law in Utah and Colorado as a partner with White & Jankowski in Denver, notes that Colorado has seven water courts dedicated to water rights disputes—and a right of direct appeal to the Colorado Supreme Court. And for good reason. “We put people in jail for stealing water,” Curtis says.

Unlike many other states, Colorado works under a prior-appropriation system, on essentially a first-come, first-served basis. Senior holders of water rights have priority over subsequent rights holders. This allows the most-senior holder of rights on a stream to take all the water it needs before the next-most-senior rights holder is allowed to divert water, and so on until the supply runs out. In dry years, junior rights holders have diversion curtailed, so their water is severely limited or nonexistent.

And there’s the rub. As Curtis says, “Legal water is not something you can irrigate with. You need the wet stuff. Water decrees are not worth anything if the water isn’t there.”

This regime has dominated how the state developed, Curtis says. “The person who has the water rights gets all of their water before the next person in line gets any.” And hoarding is strictly verboten. “If you don’t use your water for a period of 10 years or more, Colorado law allows the water court to rescind your water right, so that others who actually do need the water can use it.”

Fracking has completely changed the Western water landscape, says O’Reilly. Energy companies are drilling for shale gas, which requires an immense amount of water, which is then contaminated and leaves the ecosystem permanently. Companies can also afford to buy water at vastly inflated prices. Previously the price of water was relatively stable.

“Prior to 2010, you could buy an acre-foot of water at auction for $35. In parts of Colorado, that water is going for $2,000 to $6,000 per acre-foot,” Curtis points out. Frackers can also afford to drill and buy water when oil and gas prices are high, and to cease operations when prices dip, giving them a tremendous advantage over ranchers. “You can’t tell your cows to stay in a corner and not drink for the next few months until the price of beef goes up,” O’Reilly says.

In California, where pumping is neither regulated nor measured, only cities reliant on well water measure what they pump, and only then to determine how much chlorine to add to the water. In the Central Valley, which produces much of the country’s fruits, vegetables and nuts, overpumping is causing subsidence, the sinking of land caused by extraction of groundwater. According to NASA satellite photos, parts of the Central Valley are sinking as much as 2 inches a month.

What’s worse, says Richard Frank, a former environmental litigator with the California attorney general’s office and now a law professor at the University of California at Davis, is that those areas of subsidence—which have a high concentration of what’s called Corcoran clay—are destroying aquifers as they collapse from the weight of the ground above them. And since aquifers can be replenished by drainage of surface water and are the best way to store water, parts of California’s water storage system will be destroyed forever.

“With our willy-nilly unregulated groundwater, we are slowly but surely destroying Mother Nature’s water storage system,” Frank says. “It is far more expensive to create replacement storage. And that’s a liability question that’s worth discussing.”

Though California began receiving rain in January, there is no guarantee it will get enough snow and rain to replenish its water system. “There is a possibility our four-year drought will continue. In any event,” he says, “what we are in is likely the new normal, due to changing climatic conditions.”

As California’s water needs continue to grow, O’Reilly says, “we are not at the peak of the water wars. There is a lot more to come.”

This article originally appeared in the March 2016 issue of the ABA Journal with this headline: “Longest Straw Wins: California’s ‘pumper-take-all frenzy’ is worsening the effects of its drought and shedding light on the state’s water law deficiencies.”