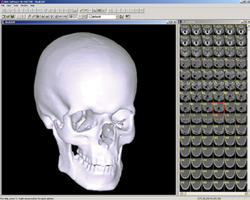 But after encountering academic problems, Weinberger found himself working at a 3D printing studio in Jacksonville, Florida, and he realized that there was untapped potential for 3D printing in litigation.

Three-dimensional printers produce objects by following a complex computer-assisted design that binds together raw material. Using 3D printing, attorneys can make models from photos taken at the scene of an accident or a crime, allowing jurors to see evidence long since spoiled. They can scale up a fingerprint so an expert can point out distinguishing marks or scale down a crime scene to a tabletop. And, Weinberger says, models can be accurate down to the submillimeter level.

That's why Weinberger and his bosses at the Florida studio, Bryce Pfanenstiel and Adam Dukes, started 3D Printed Evidence, where they are offering to make demonstrative evidence for trials. Though they've been in business for only a few months, Weinberger says they've already done work for lawyers, including a scale model of part of a crime scene and medical models for several forensics experts.

The models cost $200 to $400 on average, which makes them cheaper than computer animations, but not necessarily less costly than other conventional demonstrative evidence, like poster boards. However, Weinberger says, the ability to touch the evidence can be powerful.

"Having the [tactile] component just makes it resonate that much further," he says. "You could watch a five-minute animation and when the jurors go back to deliberate, they don't necessarily have it in front of them."

This article originally appeared in the February 2015 issue of the ABA Journal with this headline: "Physical Evidence: A Florida company offers 3D printing for demonstrative evidence."