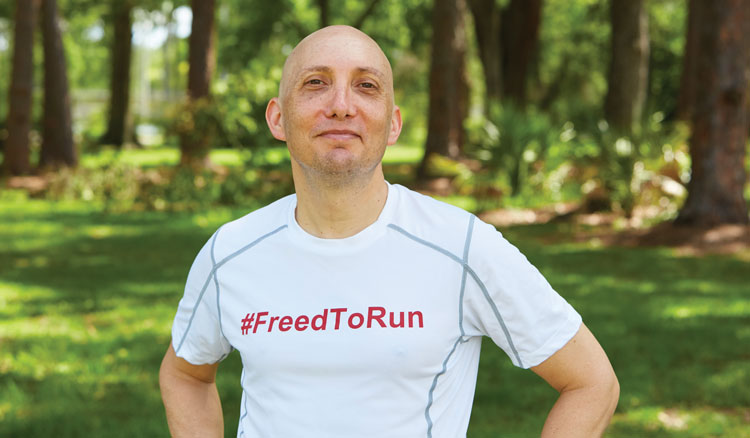 Photo of Michael Freed courtesy of Freed to Run

Philanthropy is a family affair for ABA members Crystal and Michael Freed. Separately and together, they have worked to raise money and awareness for causes close to their hearts.

“We both want to raise our daughters to know about giving back and not being entitled,” says Michael, a shareholder at Gunster in Jacksonville, Florida. He’s been an ABA member for 22 years; she just returned to membership last year.

Since 2008, when Crystal left her job as a commercial litigator, she’s focused her career on advocating for victims of human trafficking. She formed the Freed Firm, in which she represents clients and acts as a community advocate.

Crystal came to the United States from Trinidad and Tobago with her family in 1990. Violence was common in her household. “One of the reasons I care about victims of human trafficking and survivors of human trafficking is because I don’t want anyone to ever feel as powerless as I felt as a child,” Crystal says.

As her birthday approached in July 2016, she wanted to mark the occasion in a significant way. “Forty is one of those pivotal moments in life,” she says.

Her friends Sarah Symons and John Berger run a shelter in Jalpaiguri, India, for survivors of human trafficking and were hoping to expand their building to a third floor—and they would need about $40,000. The numbers seemed serendipitous.

Crystal had a Bollywood-themed benefit ball as a nod to her family’s East Indian heritage and the Jalpaiguri shelter that would receive the funds, and she was able to achieve her $40,000 goal.

Crystal’s success spurred her husband to create a philanthropic goal last year. He’d been doing pro bono work with the nonprofit Jacksonville Area Legal Aid for years and wanted to create a fundraising event to benefit them.

He hit on a bold plan. He had begun running seriously only the year before but completed four marathons and three ultramarathons. He thought a marathon event, called Freed to Run, could be a way to raise funds and awareness of the need to support legal aid services. He’d start in the state capital of Tallahassee and run to his hometown of Jacksonville. If he ran the length of a marathon every day, it would take him six days.

“It was really a God thing because when I came up with the idea and we looked at the map, if you go down I-90, about every 25 to 28 miles there’s a courthouse,” Michael says. “So you basically have a marathon between each courthouse, which works out really nicely.”

There’s another reason for the fortuitous spacing of courthouses, and it dates back to the days when judges rode circuit. “It’s as far apart as a judge could ride in a day, which is coincidentally about the length of a marathon,” says Jim Kowalski Jr., president and CEO of JALA. “You can’t kill a judge’s horse.”

“As a wife I was like ‘What? Can your body do that?’ ” says Crystal with a laugh. After determining he was serious, she consulted a triathlete friend about how she could help sustain Michael during the grueling six-day run from May 28 to June 2, 2017. Crystal drove ahead in a van with the couple’s daughters, giving Michael a water break every 3 miles or so.

Michael completed all six marathons and raised nearly $70,000. To his surprise, many people ran alongside him, and he was seen off in the mornings by cheering crowds at the courthouses. On the final day, there was a barbecue on the Duval County Courthouse lawn to welcome him to the finish line.

“I didn’t know what it was going to be when I did it last year; it could have just been a sore old man running across the state, but it’s really turned into something neat,” he says.

To find out more about Freed to Run, including how teams can sign up to participate, go to jaxlegalaid.org/freedtorun. Members Who Inspire is an ABA Journal series profiling exceptional ABA members. If you know members who do unique and important work, you can nominate them for this series by emailing [email protected].