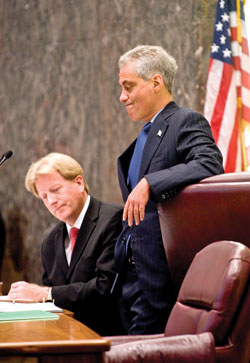 “I have yet to run into a single law firm that has turned me down” unless they had a conflict, says Patton, a former partner at Kirkland & Ellis who has long been active in pro bono initiatives. “So far, I’m batting a thousand.”

Four firms, including Kirkland, have agreed to represent the city in complex contractual matters or to provide ongoing legal advice on confidential matters, Patton says. It’s a new program under the administration of Mayor Rahm Emanuel and it could save the city millions of dollars in legal fees. The city spent $25 million in outside legal fees last year, Patton says. The department’s proposed 2012 budget, excluding outside legal fees, is about $37 million.

Though recession-racked budgets may seem to be the inspiration for such programs, volunteer lawyering has existed in other governmental entities for years, with cash-strapped officials—some with hiring freezes—calling on law firms or individual lawyers to contribute their services pro bono.

For nearly a decade New York has been receiving free legal help from firms that either handle big cases or loan the city young associates to handle tort cases or depositions. Since 2002, New York has saved approximately $84 million in legal fees, says corporation counsel Michael Cardozo. The city’s entire law budget is about $110 million a year.

In Los Angeles, new law school grads compete to take part in a six-month volunteer program prosecuting misdemeanor cases for the city, says Susan L. Frauens, an assistant city attorney who heads the training division. Three or four times a year about 20 new lawyers volunteer, gaining trial experience while filling a void due to the city’s hiring freeze. And though there is no pay, only the best and brightest get selected.

“Everybody is working without enough resources,” Frauens says. “So I think we’re all trying to think creatively as to how we can do more with less resources.”

Resources are also an issue at the U.S. Department of Justice, which advertises unpaid positions for special assistant U.S. attorneys. Currently 57 are working without pay in 20 districts, according to a department representative. Some have been serving since 2001, though the typical appointment is for one to two years, according to the DOJ’s career website.

IS IT PRO BONO?

Giving free services to a governmental body is certainly a public service, but does it meet the traditional spirit of pro bono, typically defined as helping an indigent individual? Government officials and volunteer attorneys acknowledge that it’s a different kind of pro bono work, but important nevertheless.

“You could have an interesting philosophical debate, but I think people can do both,” Cardozo says. “I think the position of the American lawyer is that [volunteering legal services to a city] does not fit the traditional definition of pro bono.”

On the other hand, Cardozo adds, it is in a law firm’s interest to give back to the city where it does business.

The next step in the Chicago initiative will be asking law firms to assign lawyers to work with the city for a period of time.

Terrence J. Dee, a Kirk land partner, says his firm has not done much work for the city in the past and has never been asked to do so pro bono. “This is very new to us,” he says.

Dee thinks the work will be good for the firm because it expands training and career development for young lawyers and also gives back to the city. But he notes some limits. For example, the firm would not likely represent the city as a plaintiff in a case where it is seeking millions of dollars, since there would be plenty of incentive for a law firm to take such a case on a contingency-fee basis.

“It’s not that we have a broad policy now,” he says, “that anything the city asks us to do we’re going to do pro bono.”