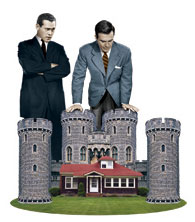 If one person objects to a search, may the police remove him and seek permission from another occupant to conduct it? Illustration by Viktor Koen.

The U.S. Supreme Court has had a good deal to say about the Fourth Amendment in recent terms, especially on some high-tech or relatively novel questions.

The justices held in 2012 that attaching a GPS device to a vehicle to track its movements constituted a search. And last term, the court held that the natural metabolization of alcohol from the bloodstream does not automatically allow the police to draw a nonconsenting suspect’s blood without a warrant. It also used two cases to establish some broad Fourth Amendment contours for police use of drug-sniffing dogs.

Later this term, there is a chance the court will add a case about whether the police may examine the contents of an individual’s cellphone without obtaining a warrant.

This month, though, the justices will be back on terra firma with a more everyday Fourth Amendment question. The case of Fernandez v. California, to be argued Nov. 13, involves situations where the police arrive at a house or apartment with multiple adult occupants. If one person objects to a search, may the police remove him and seek permission from another occupant to conduct it?

“The primary significance of the case is how often the scenario arises,” says Jeffrey L. Fisher, the co-director of Stanford Law School’s Supreme Court Litigation Clinic. “Police every day across the country find themselves going to residences where multiple people live and seeking consent to search without going through the hoops of getting a warrant.”

Fisher represents the perpetrator in a gang-related incident on a Los Angeles street corner in 2009. Walter Fernandez robbed and slashed a man who had encroached on the territory of a street gang known as D.F.S.

The police approached an alley where gang members were known to congregate, and they were told their suspect was inside a nearby apartment, court papers say. Five officers approached the apartment, where they could hear a commotion inside. Roxanne Rojas, Fernandez’s girlfriend, answered the door. She had a fresh bump on her nose and some blood on her shirt. She confronted Fernandez about another woman and he struck her, court papers say.

As police asked Rojas to step outside, Fernandez spoke from inside the apartment. “You don’t have any right to be here,” he told the officers. “I know my rights.”

The police removed Fernandez from the house and took him into custody. About an hour later, they sought consent from Rojas to search the apartment. She eventually gave oral and written permission.

The police then searched the apartment without a warrant. They found a shotgun and ammunition, a knife allegedly used by Fernandez in the street robbery, and clothing that matched the description given by the robbery victim of his assailant.

Charged with robbery and other counts, Fernandez sought to suppress the fruits of the warrantless search. A California trial court rejected his motion, and he pleaded no contest to some charges. A jury convicted him on the robbery charge.

A state appellate court upheld the key charges and held that the trial court was correct to refuse to suppress the evidence found in the apartment search.

The U.S. Supreme Court has ruled that police may enter and search a residence without a warrant when they have the consent of an occupant who shares authority over the particular place, even when a co-occupant later objects to the use of evidence seized in such a search.

But in their 2006 decision in Georgia v. Randolph, the justices ruled 5-3 that the police may not get permission from one co-occupant to enter a home without a warrant when another co-occupant is present and expressly refuses to consent.

Writing for the majority, Justice David H. Souter, now retired, said the decision was in line with the “centuries-old principle of respect for the privacy of the home.” The court’s decisions in this area are full of references to the “social norms” regarding visitors to private homes, which isn’t necessarily what comes to mind when thinking about police showing up at the home of a suspected gang member.

“Since the co-tenant wishing to open the door to a third party has no recognized authority in law or social practice to prevail over a present and objecting co-tenant, his disputed invitation, without more, gives a police officer no better claim to reasonableness in entering than the officer would have in the absence of any consent at all,” Souter wrote.

In 2008, the 9th U.S. Circuit Court of Appeals at San Francisco extended that principle to hold that if a defendant expressly withholds his or her consent, a warrantless search conducted after the defendant has left or been removed from the residence is invalid even with the consent of a co-occupant.

But the 9th Circuit was an outlier, and four other federal circuit courts and two state supreme courts have ruled that a co-occupant’s consent to search is enough even if an objecting occupant is removed.

In Fernandez, a panel of the California Court of Appeal also rejected the 9th Circuit’s reasoning and sided with the other courts.

That court said it was crucial that Fernandez was absent by the time the police had obtained his girlfriend’s consent to search their apartment.

“We believe that the line we draw is consistent with that drawn by the Supreme Court in Randolph,” the state appellate court said in its 2012 decision. “As in Randolph, the line we draw is a clear one, distinguishing between cases in which a defendant is present and objecting to a search, and those in which a defendant has been lawfully arrested and thus is no longer present when a co-tenant consents to a search of a shared residence.”

For Fisher, the most straightforward argument for Fernandez is that the California appeals court’s reasoning allowed the police an easy way to dodge Randolph.

“The Supreme Court held in Randolph that when the police get a yes from one person and a no from another, that’s not good enough,” Fisher says. “It would seem to me quite odd for the police to be able to circumvent that ruling by removing the one person who said no.”

Fisher argues that the California appellate court’s “continuing presence” test would create practical problems. Does the objector remain “present” if he excuses himself to take a phone call? What if the police ask the objector to get into a squad car to talk things over? May they then get consent from a co-occupant?

“Under a rule requiring continuing presence, the police presumably could return and get valid consent from an acquiescing resident as soon as the objector leaves to go to work or to pick up takeout for dinner,” Fisher argues in his brief on behalf of the defendant. “Through just a little bit of gamesmanship the police would be able to eviscerate the impact of any Randolph objection.”

The California attorney general’s office argues in its merits brief that the apartment search was reasonable because Rojas—Fernandez’s girlfriend and an authorized tenant—voluntarily consented to it.

Under Randolph, the brief notes, “the police may not rely on the consent of one occupant to search the shared premises because such an entry would risk escalating the verbal dispute into a violent confrontation.”

“However, when the objecting co-occupant is not present—especially when his absence is due to a lawful arrest—the concerns animating Randolph’s holding disappear, and the general rule in favor of co-occupant consent comes to the fore.”

To extend Randolph to circumstances in which the objector is not even present would give him “a continuing absolute veto,” the state says.

Orin S. Kerr, a law professor at George Washington University and an expert on criminal procedure and the Fourth Amendment, says Fernandez could lead to a narrow decision resolving the circuit split over the post-Randolph situation.

“The big question is whether the court is going to rethink Georgia v. Randolph,” Kerr says. “This is a case that has maintained a low profile, and that may be justified, or the court may resolve it more broadly.”

This article originally appeared in the November 2013 issue of the ABA Journal with this headline: “Search Me: High court tackles another 4th Amendment case.”