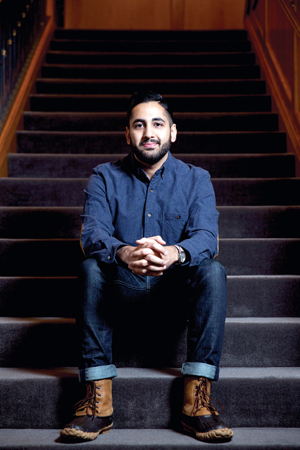 Clinic student Aamir Rahman has been helping develop international guidelines to prevent the misuse of technology. Photo by Adam Lerner.

A Brooklyn Law School professor is helping Europe’s small but growing startup community get affordable legal services through a network of newly created law school clinics—a relatively new concept overseas that appears to be taking off.

Jonathan Askin, founder of the Brooklyn Law Incubator and Policy Clinic—which offers low-cost legal services to New York-area entrepreneurs—helped create a network of similar clinics in Europe, where he says both clinical legal education and support for entrepreneurs have lagged behind the U.S.

“I went to Brussels and pitched it to the European Commission,” he says, “and they said this would be an exciting concept.” The commission granted 500,000 euros (about $565,000) to fund iLinc, a network of startup legal clinics and tech law programs.

The European clinics, which began operating in 2013, are much like those in the U.S. that train students to work with underrepresented populations in need of low-cost or pro bono legal services. But rather than providing services to the poor, they’re helping entrepreneurs who lack the legal support or resources to take their businesses to the next level.

Askin’s BLIP clinic serves as a model. “We work with every kind of startup,” he says. “We think they can turn their ideas into reality with affordable legal support.”

In Europe, Askin helped assemble a consortium of four core law schools in England, Germany, Belgium and the Netherlands, along with 17 law school partners, to build the iLinc network. He looked for schools he considered tech-savvy, located near thriving tech centers.

John Cummins, iLinc’s project manager and a research fellow at the Centre for Commercial Law Studies at Queen Mary University of London, says the program has been much needed.

“The economy in Europe is not as buoyant as it should be, and people are looking to the U.S. and asking ‘Why don’t we have a Google or a Twitter?’ ” he says. “The European Commission has sent a strong message to support the European startup community. And certainly when it comes to startups, that’s really something new.”

Cummins says the program enhances students’ legal education, expands their career prospects and makes them more employable. “Clinical legal education in Europe is nowhere near as advanced as it is in the United States,” he says. “European legal education focuses more on principles than practice.”

The partnership with Brooklyn’s clinic is mutually beneficial. Brooklyn’s students are working with their European counterparts on transactional and policy work, exploring global legal issues on privacy, the sharing economy, social entrepreneurship, copyright and other issues relevant to business.

“We’re working on a lot of transatlantic collaborations now,” Askin says. Among them is 3D Hubs, a Dutch company that does 3D printing and has an operation in Brooklyn.

Aamir Rahman, a 3L student in the BLIP program, has been working with 3D Hubs in New York and Amsterdam to help develop an international code of conduct. The code will be a series of guidelines and best practices to prevent misuse and abuse of the technology for illicit purposes, such as creating weapons or drug paraphernalia.

“It ties closely to the ‘terms of use’ that a lot of companies have,” Rahman says. “It’s good to experience not only … drafting these terms, but actually getting a feel for what’s necessary for the industry.”

The code also offers a challenge in creating unified guidelines for countries whose laws don’t always parallel those in the U.S. “Copyright laws may be very different,” or other countries “may not take [them] as seriously as we do,” he says. “We will learn what they are.”

“The Internet breaks down communication barriers. Our clients are subject to different laws,” he says. “We get to tap the legal expertise of our law partners in Europe, and we teach how to give global legal counsel to clients.”

While there are other law school programs that work with entrepreneurs in the U.S., Askin says they have yet to create a cohesive network like the one in Europe.

“I think it’s easier in Europe because we’re building on virgin soil, from the ground up, with no pre-existing structures and few preconceived notions to modify or undo,” he says. “I think we are well on our way to creating a network of startup entrepreneur clinics in America in which we will all benefit from each other’s historic and current knowledge and experiences.”

This article originally appeared in the April 2015 issue of the ABA Journal with this headline: “Getting Clinical: Incubator network boosts Europe’s startup community.”