If your judge is your Facebook friend, should that be disqualifying? 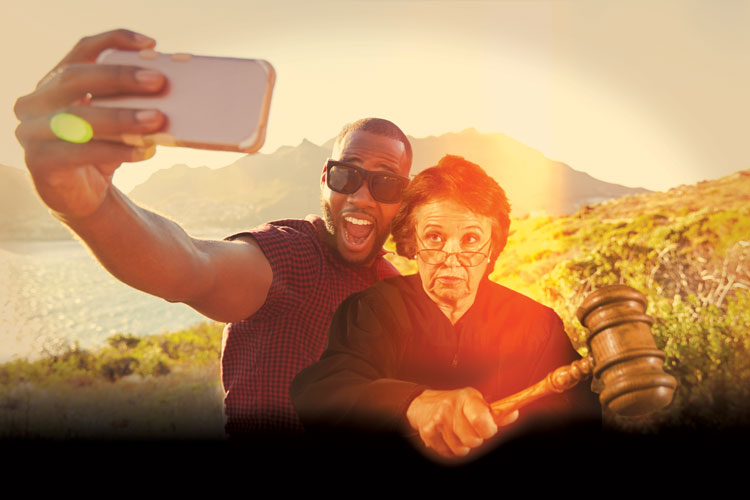 A judge’s Facebook friendship with an attorney is not a legally sufficient basis to disqualify the judge from that attorney’s case, a sharply divided (4-3) Florida Supreme Court has ruled in a decision that produced three different opinions from the seven jurists.

The majority concluded that a judge and attorney being Facebook friends does not mean there is a “close or intimate relationship” that might give rise to a need for the judge to step off the case.

Justice Jorge Labarga concurred with the majority but wrote separately “to strongly urge judges not to participate on Facebook.” He wrote that judges being friends with lawyers on social media is “inviting problems.”

Three justices dissented in an opinion authored by Justice Barbara Joan Pariente, who has since retired. She wrote that “recent history has shown that a judge’s involvement with social media is fraught with risk that could undermine confidence in the judge’s ability to be a neutral arbiter.”

She concluded: “The bottom line is that because of their indeterminate nature and the real possibility of impropriety, social media friendships between judges and lawyers who appear in the judge’s courtroom should not be permitted.”

The decision disagreed with the Florida appeals court’s decision in Domville v. State (2012), which had ruled that a trial judge’s friendship with a prosecutor in a criminal case disqualified the judge. The appeals court concluded that the social media friendship “would create in a reasonably prudent person a well-rounded fear of not receiving a fair and impartial trial.”

That opinion held that a judge’s social media friendship with an attorney appearing before the judge would violate Canon 2B of the Florida Code of Judicial Conduct, which provides: “A judge shall not ... convey or permit others to convey the impression that they are in a special position to influence the judge.”

“Of course Facebook ‘friendship’ creates the appearance of impropriety, which is what the JEAC said ... what Domville concluded and what the dissent opined and stated at least three times by saying that in this case the judge should have been removed,” says Reuven Herssein, whose firm, the Herssein Law Group, is involved in litigation with a former client—United Services Automobile Association—over attorney fees and other issues.

The Herssein Law Group had sought the disqualification of Miami-Dade County Circuit Judge Beatrice Butchko because she was a Facebook friend of attorney Israel Reyes, who was representing an official with United Services Automobile Association.

The Florida Supreme Court explained that its decision is in line with the majority position. “The clear majority position is that mere Facebook ‘friendship’ between a judge and an attorney appearing before the judge, without more, does not create the appearance of impropriety under the applicable code of judicial conduct.”

‘FRIENDS’ IN OTHER STATES

For example, a Kentucky Supreme Court decision from 2013, McGaha v. Commonwealth, established that “it is now common knowledge that merely being friends on Facebook does not, per se, establish a close relationship.”

A 2014 Arizona judicial ethics opinion provides that a judge’s friendship on social media with an attorney does not create a per se disqualification requirement.

The opinion added in a footnote that “a person in the ‘close friend’ category is more likely to trigger disqualification than a person appearing as one of many on a list of friends.”

A lengthy 2016 opinion on judges’ use of social media from New Mexico’s Advisory Committee on the Code of Judicial Conduct reached the same conclusion: “Given the ubiquitous use of social networking, the mere fact that a judge and an attorney who may appear before the judge are linked in some manner on a social networking site does not in itself give the impression that the attorney has the ability to influence the judge.”

ABA Formal Opinion 462—Judge’s Use of Electronic Social Networking Media—provides: “A judge who has an [electronic social media] connection with a lawyer or party who has a pending or impending matter before the court must evaluate that ESM connection to determine whether the judge should disclose the relationship prior to, or at the initial appearance of the person before the court.”

The ABA opinion stresses that context is key. It adds that “simple designation as an ESM connection does not, in and of itself, indicate the degree or intensity of a judge’s relationship with a person.”

The Florida Supreme Court decision “removes Florida’s status as an outlier among the overwhelming majority of jurisdictions which have looked at this issue and concluded that there is nothing inherently ethically improper with judges and lawyers being connected via social media,” says John Browning, a Dallas trial lawyer and expert on social media and the law.

However, Herssein argues the Florida Supreme Court’s decision not imposing a ban on judge-attorney social media friendships will have unintended consequences and will place more of a burden upon those who discover that there may be a close relationship between a judge and an attorney on the other side.

Under the prior law in Florida, he explains, there was no need to do anything other than identify that the judge had a social media friendship.

“Now, however, we need to get more,” he says. “For instance, have they communicated to each other in general, or on my case, or on an issue that may be related to my case, whether they are more than just ‘acquaintances’ … the only way to get more is through discovery. There are also issues of preservation of the social media data that needs to be dealt with. So, in a sense, this opinion opened a Pandora’s box.”

Browning, however, maintains judges need a presence on social media, particularly in jurisdictions with partisan elections.

“Not having a robust social media presence is political malpractice in the digital age,” Browning says. “Judges are increasingly expected to have some level of ‘digital citizenship’ in which they are accessible to the communities that they serve.”

This article ran in the May 2019 ABA Journal with the headline "Is your judge your Facebook friend? Sharply divided Florida Supreme Court says it's not a basis for disqualification"