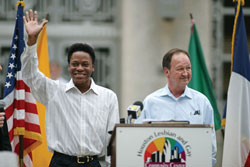 On Sept. 17, 1998, four Harris County officers bounded into John Lawrence’s Houston-area apartment in response to a call that a black male was inside “going crazy with a gun.” What they actually witnessed remains unclear, but two men were arrested and charged under a 1974 Texas homosexual sodomy law: a drunk and defiant Lawrence and his acquaintance, Tyron Garner.

But sensing a shift in public sensitivities, gay rights advocates saw a rare opportunity to cast aside Bowers. Urged to do so, Garner (left) and Lawrence (right) pleaded no contest, which focused their appeals on a right to private intimacy and the unequal application of the Texas law. In Lawrence v. Texas, a 6-3 majority overturned Bowers as an unworthy precedent. Wrote Justice Anthony M. Kennedy: “Bowers was not correct when it was decided, [and] is not correct today.” —Allen Pusey