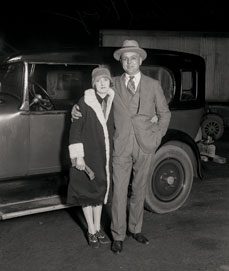 As bootleggers go, Roy Olmstead was ahead of the curve. The state of Washington began to prohibit the sale of alcohol three years before the Volstead Act made it illegal elsewhere. And as a Seattle police officer, Olmstead was early to recognize the profit potential for various Canadian spirits on the U.S. side of the border.

While rising quickly through the ranks of law enforcement, Olmstead cultivated a vast network of vendors, buyers and importers—many of them former police officers—for what became a very lucrative sideline. And in 1920, when Prohibition agents seized a load of Olmstead’s Seattle-bound booze, he was fired and became a bootlegger full time.

By the time federal agents conducted a full-scale raid on his home in 1924, Olmstead was already a millionaire and head of one of the largest rum-running operations in the nation. Olmstead was indicted, along with 90 other defendants—including his lawyer—based on hundreds of incriminating conversations gathered from five months of warrantless wiretaps by federal agents. Olmstead asked the U.S. Supreme Court to review the decision sentencing him to four years in prison, arguing that the Fourth and Fifth Amendments protected the conversations, many of which were made from a telephone in his home.

In a 5-4 decision in Olmstead v. United States, issued in 1928, the Supreme Court disagreed. Writing for themajority, Chief Justice Howard Taft said, “The amendment itself shows that the search is to be of material things—the person, the house, his papers or his effects.” Tapping wires outside the house was not so invasive as to require a warrant. Moreover, only Congress—not the courts—would have the power to declare such evidence inadmissible.

In dissent, Justice Louis Brandeis argued that Taft’s literal view of the Fourth Amendment ignored the rise of technology. “Discovery and invention have made it possible for the government, by means far more effective than stretching upon the rack, to obtain disclosure in court of what is whispered in the closet.”

Little more than a year later, the attorney in charge of Prohibition prosecutions, Mabel Walker Willebrandt, wrote that she considered the wiretaps of Olmstead’s residence to be part of a “dangerous and unwarrantable policy.” Warrantless wiretaps remained legal until 1967, when the court overturned Olmstead in Katz v. U.S.

Photo of Mabel Walker Willebrandt courtesy of the Library of Congress