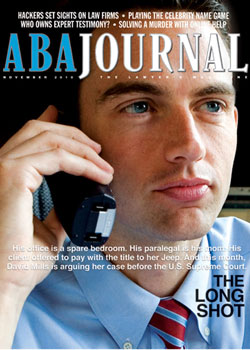 Regarding “The Long Shot,” November: Moxie and humility and generosity are a rare combination of gifts—regardless of guild or profession. How blessed his clients are that David Mills decided on law rather than a host of other life-saving professions that no doubt would have welcomed him as one of their finest.

Given the current U.S. Supreme Court, Mills wisely addresses only the procedural aspects of this case, but anyone concerned about violence against women and rape in prisons should read the 6th U.S. Circuit Court of Appeals decision in Ortiz v. Jordan to appreciate how fully the institution in which Michelle Ortiz was attacked failed her.

Defendant Paula Jordan told Ortiz that the corrections officer who digitally raped her was just a dirty old man. How did she know? Action should have been taken against him a long time ago. When I read that Jordan told Ortiz to let the matter go because the officer was leaving the next day for another institution, I wondered where he was moving to and whom he would have the opportunity to abuse in the future.

Then defendant Rebecca Bright, the institutional investigator, insisted Ortiz was a liar and forced her to take a polygraph test, which she passed. Police forcing rape victims to take polygraphs as the price of going forward with investigations was a problem nationwide until the Violence Against Women Act. Now, states that do this can lose their VAWA funding, and almost every state has enacted laws against it. I do not know if defendant Bright would be specifically covered by the Ohio law, but certainly she violated its spirit.

What a horror that Ortiz was first repeatedly beaten by her husband, then apparently had a lawyer who did not know how to deal with the stabbing charge against her, then went to prison where she was raped physically by a guard and figuratively by prison authorities and the justice system.

Sixth Circuit Judge Martha Craig Daughtrey dissented from her court’s decision overturning the jury verdict in Ortiz’s favor, calling it a “legal travesty.” Although I am not a judge, as someone who works to educate judges about adult victim sexual assault, I have to say I concur.

A CALL FOR SENSITIVITY

SPEAKING UP FOR PARENTS

“Smothering Mothering,” November, hints at the reason why there is a Tea Party movement. Government has no business interloping into parents’ lives; and in the case of custodial matters, the parents should be the sole source of all custodial decisions.

Most psychologists have no basis to opine on families and children as there is an entirely different professional out there, the marriage and family therapist, who is qualified to render opinions about parenting and child-rearing. So, through a profound ignorance of the psychology of the family, the government has touched off a race for when and under what conditions will this country be altered as it falls apart.

What a vulgar, savage article! what luxuriant misogyny this is. How is it that the mother is now the object of scorn and hatred for being a mother? Or is it all parents who are real parents? Is the community standard now abandoning one’s children to nannies, sitters and extended care while living one’s own indulged, aging adolescent life? Knowing one’s children’s teachers and friends is now risible? Coaching Little League, helping at church is now wrong? The heroine of the piece sends her 9-year-old on the subway alone? This is insane. Forced into inhuman hours at the office and left with homes with no parent home, people compensate with nanny cams to assuage their guilt and fear, and the compassion is not for the family? Talk to teachers, talk to police. The child with the mother who will parent has greatest resilience and the strongest future.

This is the American Bar Association? One shudders for the future of the next generations.

“Cyberspace Under Siege,” November, seems to be missing one of the most common security flaws found in the small and medium-size business market these days. It’s very easy to lock down a firewall, install auditing software, and make sure that you are as protected as possible from an outside threat.

What is much more difficult to guard against is the angry secretary who feels her job is in danger and decides to slowly move data off the network with a USB drive. Although backups are great to recover this kind of information, it can become a serious problem if that user is deleting and moving data over a long period of time that a normal backup schedule might not cover.

Never let your IT department overlook the biggest danger in our field: disgruntled employees.

The article recommends pulling data onto a USB thumb drive for a meeting. This is a horrible idea. How often do people lose thumb drives compared to how often your well-maintained network gets broken into? You’re taking an unlikely scenario and making it likely.

By all means, take a second look at how you do things, and definitely have your network checked out by a security firm. But don’t give your data away by having all of a client’s files regularly copied onto easily lost media. Similar thought should be put into the data on employee laptops. Laptops are lost and stolen fairly regularly.

IN HONOR OF WORKING WOMEN

I enjoyed reading about Justice Ruth Bader Ginsburg in “Family Ties,” October. I do not wish to detract in any way from the credit due Justice Ginsburg. How ever, we should keep in mind that most women struggling to fulfill the role of mother and lawyer do not have the advantage of the salary of an Ivy League professor, as well as a second wage earner who is one of the leading U.S. tax attorneys. While Ginsburg’s achievements are undoubtedly heroic, those of mothers with husbands who earn typical salaries, not to mention single mothers or women whose husbands do not work outside the home, are at least as heroic. I suspect that Ginsburg herself acknowledges this, but I think the article could have noted that many less fortunate women are equally, if not more, courageous.