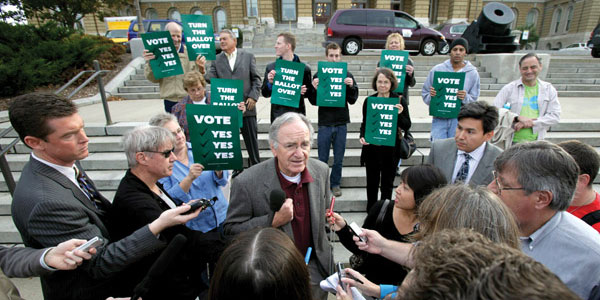 Sen. Tom Harkin at a rally in support of three justices facing a retention vote.
Photo by AP/Charlie Neibergall

In 1962, Iowans changed the way they chose their judges to a system called merit retention, which requires that a special commission nominate qualified judicial candidates for the governor to appoint. Generally, judges serve six to eight years before facing the voters in a retention election. The goal was to minimize politics from the judicial selection process while still giving voters the ability to remove so-called bad judges.

For 48 years, things went pretty much as planned. Not a single Iowa Supreme Court justice, or appellate or district judge, was tossed out by the voters during the five decades. Most judges received more than 70 percent support.

Then came Nov. 2, when Iowa voters flooded voting booths in record numbers to remove three sitting supreme court justices, including the chief justice, who were part of a controversial but unanimous decision in 2009 that permitted same-sex marriages.

Reactions to the elections were immediate. Some praised the election results as a victory against judicial activism and promised they would be repeated elsewhere across the country. Others decried them as a direct threat to judicial independence due to the politicization of judicial selection by special interest groups, many of them out of state, who funded the anti-retention campaign. A few contended that this election would give pause to judges before deciding future controversial matters.

The reality, according to historians of judicial elections, is that the dire warnings by all sides are likely exaggerated. Still, they say, what happened in Iowa deserves attention.

“What happened in Iowa cannot help but give a temporary chill to other courts when faced with such a highly charged political issue as gay marriage,” says New York University School of Law professor Barry Friedman.

“But this sort of thing happens episodically, creates a stir and then dies down,” says Friedman, who is the author of The Will of the People: How Public Opinion Has Influenced the Supreme Court and Shaped the Meaning of the Constitution. “Some accountability is not a bad idea. The rule of law is not in danger because of this one election.”

Friedman and other observers of judicial elections point out there were several other hotly contested judicial retention votes in Alaska, Colorado, Florida, Illinois and Michigan, where ouster campaigns raised equal or considerably more funds than the efforts in Iowa. But all the sitting state supreme court justices in those states won their retention votes.

In fact, history shows that judges are almost never removed via retention votes.

Between 1936, when California became the first state to adopt judicial retention, and 2009, 637 state supreme court justices in 16 different states faced retention votes. Only eight lost, according to Albert Klumpp, a research analyst at McDermott Will & Emery in Chicago and one of the nation’s leading academic researchers on judicial retention.

Klumpp’s research shows that two of the 1,772 appellate judges who faced retention votes during the past 75 years were ousted. Of the 7,535 trial judges up for retention, voters booted only 70.

“It is a matter of great sadness to have superb justices turned out like this,” says Indiana Chief Justice Randall Shepard. “But I’m inclined to believe that what happened in Iowa is the exception that proves the rule. The judicial retention system is still the best because it allows for the qualified selection of judges without the taint of money.”

“No one wants to lose because it feels bad to lose,” says Jefferson, who is president of the Conference of Chief Justices. “If there is a silver lining to what happened in Iowa, it is that the special interest groups cannot now go out and select judges who will automatically repeal the earlier decision or vote the other way.”

Jefferson is pushing an effort in Texas to change the state’s form of judicial selection from its current partisan elections to the exact system in place in Iowa. “Which is unlike Texas, where someone can become a judge or a state supreme court justice because of the popularity of their last name or because of their campaign fundraising efforts,” he says. 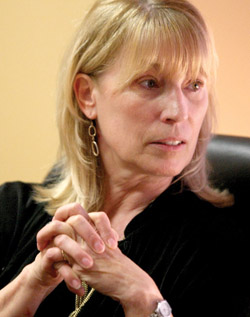 Klumpp and Friedman, who have now had the opportunity to study the Iowa election results, are convinced there was a single overriding factor in that state’s retention outcome: opposition to gay marriage.

“Iowa has been historically one of the quieter retention ballots in the country,” Klumpp says. “Of the 1,322 judicial retention votes in Iowa history, all but four have been retained. As a result, I think these justices became complacent and were not prepared to deal with the counter-campaign.”

In 1998, Iowa legislators passed the state’s Defense of Marriage Act, which prohibited marriage between gay and lesbian couples. In 2005, Lambda Legal filed a lawsuit (Varnum v. Brien) in Polk County, Iowa, on behalf of six couples who were denied marriage licenses. The suit argued that the law violated the liberty and equal protection clauses in the Iowa Constitution.

Polk County District Judge Robert Hanson ruled in favor of the couples in 2007, paving the way for them to be married. State officials immediately appealed.

On April 3, 2009, the Iowa Supreme Court issued its decision, holding that there is no overriding government interest in denying marriage licenses based on people’s sexual orientation. National news headlines blared the ruling: Iowa becomes the first Midwestern state to legalize gay marriage.

Almost immediately, opposition to the decision formed. Bob Vander Plaats, a former Republican candidate for governor, organized an anti-retention effort called Iowa for Freedom. The campaign was heavily financed by the Tupelo, Miss.-based American Family Association and other interest groups.

The justices raised no money and declined to campaign. The only response came from Chief Justice Marsha Ternus in public comments at Iowa State University three weeks before the election.

The American Family Association “wants our judges to be servants of this group’s ideology, rather than servants of the law,” the chief justice stated. “These critics are blinded by their own ideology. They simply refuse to accept that an impartial, legally sound and fair reading of the law can lead to an unpopular decision.”

But the die was cast. Exit polling showed that 57 percent of Iowans opposed gay marriage. And the issue motivated record numbers of people to go to the polls.

“Voter turnout for judicial retention in Iowa has hovered in the mid-60 percent range,” Klumpp says. “But the public participation in the Nov. 2 retention vote was 88 percent. That is an unprecedented increase. There’s been nothing like it in the history of judicial retention elections in any state.”

Klumpp points out that public participation in the 1986 judicial retention vote in California that ousted Chief Justice Rose Bird and two other justices jumped 13 percent.

When the votes were counted on Nov. 2, Chief Justice Ternus and Justices David Baker and Michael Streit received only 46 percent support.

“We sent a clear message across the country that in Iowa, the legislature makes the law, the governor executes the law, and the people amend the constitution,” Vander Plaats told the Des Moines Register. “When you have a court making law, you have tyranny, oligarchy—and you will not pass the torch of liberty to the next generation.”

None of the Iowa justices responded to requests for an interview. But the three justices, in a three-paragraph statement posted on the court’s website Nov. 3, said they hoped that “Iowans will continue to support Iowa’s merit selection system,” which the justices said “helps ensure that judges base their decisions on the law and the constitution and nothing else.”

Former U.S. House Speaker Newt Gingrich, who was in Des Moines for a book-signing two weeks after the elections, called on the other four Iowa justices to resign. “It is clear if they had been on the ballot, they’d have been repealed,” he said. “[If] they have any sense of integrity about protecting the court, they’ll step down.”

A fourth Iowa justice, David Wiggins, is up for retention in 2012, while the other three justices face the voters in 2016.

Professor Friedman thinks the chances are small that the Iowa retention rejection will be repeated elsewhere or even again in Iowa. He points out that when former Tennessee Supreme Court Justice Penny White was tossed in a retention vote in 1996 over a decision in a death penalty case, her opponents predicted they would target the other justices when they came up for their retention. But the issue fizzled and none of the other justices in that case lost their seat.

Friedman concedes that the Iowa election had one new element that should concern judges: the influx of money from out-of-state special interest groups. 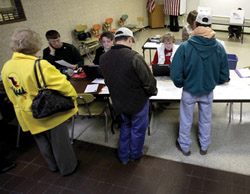 Voters in Odgen, Iowa, wait in line to receive their ballots. Photo by AP/Charlie Neibergall

According to the Justice at Stake Campaign, out-of-state special interest groups opposed to gay rights, such as the American Family Association and the Family Research Council, spent nearly $700,000 in television ads and other efforts to unseat the justices.

“This sets a very dangerous precedent for people who are angry about one single decision and are now able to go out of state to special interest groups to raise large sums of money in an effort to influence decision-making back home,” says William Weisenberg, chair of the American Bar Association’s Standing Committee on Judicial Independence and assistant executive director of public affairs and government relations at the Ohio State Bar Association in Columbus. “Once people are successful in one state, they may look at other states. So we have to take a closer look.”

“The judges I have spoken to about this are very concerned,” Weisenberg says. “Do we really want judges looking over their shoulder, concerned about losing their job, when faced with rendering an unpopular but constitutionally required decision?”

Because judges are human, the Iowa retention results will be in the minds of judges in future controversial cases, says Chief Justice Shepard. But he doesn’t think that it will cause judges to make different decisions.

More worrisome, he says, is that the litigants in highly controversial cases may think the judge ruled against them because he or she is worried about the election.

Still, Klumpp doesn’t believe the defeat of the Iowa justices was inevitable.

“The single biggest factor among the 11 justices who have lost was that they didn’t campaign,” he says. “If the Iowa justices had campaigned at all, statistics show they would have improved at least five points and they would have been retained.”

“Retention judges need to think about campaigning,” he says. “This may not sound popular, but sometimes you need to tell your side of the story. I think retention is good because it forces judges to get out there to explain themselves and to be held accountable.”

Lost in the Iowa Supreme Court vote was that all of the other Iowa judges won. Polk County District Judge Robert Hanson, who made the initial ruling permitting gay marriage, received 66 percent support. And five of the judges on the Iowa Court of Appeals were retained with 60-plus percent.

“It was frightening for all of our judges because we’ve not had any problems with judicial retention in 50 years,” says Iowa Court of Appeals Chief Judge Rosemary Shaw Sackett. “I think that made us complacent. But this has made us all more aware that the public is watching us more closely.”