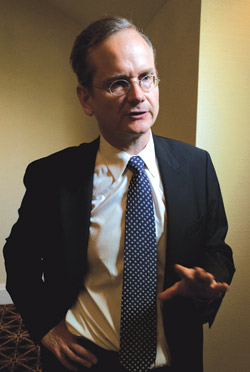 Regulators refuse to accept that the Internet has fundamentally altered the exchange of shared content, Lessig says. And that mindset is ineffective, inefficient and naive.

“Our first instinct is to invoke the law quite forcefully,” Lessig says, citing regulators who slap music pirates—most often children and teens—with hard-line copyright infringement suits rather than accept that file sharing is the reality of the Net. “The right instinct would be to modify the law and the market to reflect the new ways innovation and technology are being used, while also making sure artists are getting paid.”

His speech included Web “mashups” (clips of video and music from various sources that have been combined to make something new) inspired by professional works but created by amateurs to present new interpretations.

For Lessig, director of the Edmond J. Safra Center for Ethics at Harvard Law School, the biggest policy problem concerning Internet regulation resides in the reality that wealthy campaign financiers, including record labels and copyright holders, can influence the government far more greatly than the average citizen.

To that end, in 2008 Lessig co-founded the grassroots organization Rootstrikers. Its website collects stories of political corruption and calls for spreading the word on social media like Twitter.

“In order for us to answer the question of whether code is law,” Lessig says, we first need to get representative democracy back.