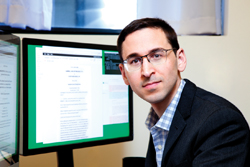 It is a sad but all-too-familiar tale. A small firm is accused of infringing a dubious patent, but if the firm defends itself in court, it risks years of litigation, millions in legal fees and a devastating award for infringement damages if it loses. Thus, many firms reluctantly settle, often paying six-figure sums they can ill afford.

CarShield’s story ended differently. The California-based startup successfully defended itself in court thanks to free legal assistance it received from a law school clinic participating in the Law School Patent Troll Defense Network. The clinic filed a motion to dismiss in April 2014, and shortly before oral argument on that motion, the plaintiff dropped its lawsuit against CarShield.

“Patent trolls are looking for the easy buck, and they won’t get that from a small business that has free legal advice,” says Jonathan Askin, a Brooklyn Law School professor who founded and directs the Brooklyn Law Incubator and Policy Clinic. BLIP represented CarShield in the infringement suit.

Created in October 2013, the Law School Patent Troll Defense Network is still getting off the ground. It is supposed to be a nationwide group of law schools, law students and lawyers that work together to provide free legal services to small businesses threatened by patent trolls. For now, however, it has participating clinics at just seven law schools: Brooklyn, John Marshall, New York University, Suffolk University, University of Southern California, University of Utah and Washington College of Law at American University.

The network has handled fewer than 10 cases so far, and results have been mixed, according to Jon Potter, president of the Application Developers Alliance, the trade group that founded and runs the network. (App makers are particularly targeted by patent trolls, Potter explains.)

“The biggest challenges,” Potter says, “are finding the right clients at the right time and matching them with law schools.”

The right clients “are willing to take a principled stand against patent trolls rather than seeking to make a quick settlement,” says Eric Adler, a partner in the Brooklyn law firm of Adler Vermillion, who advised the BLIP clinic on how to handle the CarShield litigation.

In addition, he says, those clients “are willing to sign engagement letters that limit the types of arguments and litigation the clinic will undertake. Instead of making all available legal arguments, the arguments may be limited to those that would have the most impact on other patent cases or that would be best for the students to work on for pedagogical purposes.”

Timing is also key. “Some companies have come to us too late in the litigation process,” Potter says. “They are already looking down the barrel of a gun.”

The network is trying to improve its marketing so that more potential clients will know early in the dispute that free legal help is available. It’s also trying to bring more law school clinics on board. That has been very challenging, Potter says. The source of the difficulty: Clinics usually handle work that is relatively fast and easy, such as immigration matters or landlord-tenant disputes. Patent litigation, by contrast, can be tremendously complicated and extremely time-consuming, and it can stretch on for years.

Yet law school clinics can handle this work if appropriate arrangements are made. “We proved the concept this year when we won our first patent troll case,” says BLIP’s Askin. Handling such long-term litigation is “a real burden on me,” he admits, so he limits the clinic to “maybe one case a year.”

And he has organized the BLIP clinic to have an institutional memory. To “maintain continuity from semester to semester,” he says, “some students become team leaders and work in the clinic for a second semester.”

The network is also seeking more firms to work with the clinics. “The law firms are concerned that this is very sophisticated litigation; it takes years of experience to do it properly,” says Askin. “They are also worried it would take many, many hours of law firm partner and associate time. But I think they are starting to recognize it is great training for their younger associates.”

Adler, the private practice attorney, says it was no strain on him to oversee the BLIP clinic’s work on the CarShield case. “I sent the students a few cases to read. They drafted the motions and the briefs. They did very professional work. My partner and I did some light editing,” he says. “It couldn’t have been easier for me.”

The people behind the Law School Patent Troll Defense Network are determined to make it succeed.

“This is a real passion project with us,” Potter says. “We want to make this work because we think it is great for law students, great for law firms and great for entrepreneurs.”

This article originally appeared in the March 2015 issue of the ABA Journal with this headline: “Troll Defense: Law school clinics join to help battle patent abuse.”