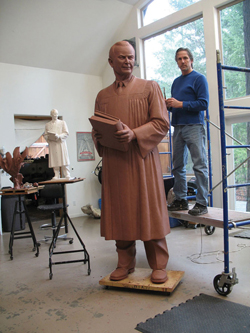 Updated: Supreme Court Justice William J. Brennan Jr. has not exactly faded into oblivion since his 1997 death, having been memorialized in busts, buildings and, last year, a U.S. postage stamp.

But some in Brennan’s hometown of Newark, N.J., felt their native son needed to be honored in the city he loved. Brennan’s family has roots in Newark that date back nearly a century. The late justice was a graduate of Newark public schools, practiced labor law in the state and served as an appeals court judge in Essex County.

Last year Guy Sterling, a retired local newspaper reporter, and Essex County Executive Joseph N. DiVincenzo Jr. launched a $100,000 fund raising effort to erect a sculpture of Brennan at the top of the steps of the Essex County Hall of Records in downtown Newark, just blocks from the justice’s childhood home. “I was not going to let Newark forget this man,” Sterling says.

Oregon-based sculptor Thomas Jay Warren learned of the Brennan project at a dedication of another piece of his at New Jersey’s WWII me morial in Trenton. Warren didn’t know much about Brennan, but after some research he was on board. In fact, Warren says he “started sculpting the maquette right away, even though at that time [the statue] was just an idea in [Sterling’s] head.”

Two-thirds of the way there, the team hopes to meet its financial goal before the scheduled dedication on June 3. The sculpture will be in traditional heroic scale (1⅓ times life-size), accessible to the public and lighted 24 hours a day.

Updated April 15 to provide the revised date of the dedication.