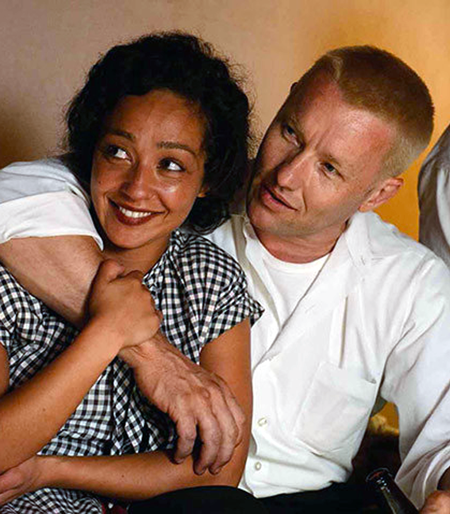 The 2016 movie Loving depicts the story of Mildred and Richard Loving, who were arrested in the 1950s because their interracial marriage violated Virginia’s anti-miscegenation statute. Photo Courtesy of Universal Studios Home Entertainment.

When it comes to civil rights milestones of the mid-20th century, a trifecta stands out: the Civil Rights Act of 1964, the Voting Rights Act of 1965, and the U.S. Supreme Court’s 1967 Loving v. Virginia decision. The latter dismantled one of the last vestiges of segregation—a law that crossed from the public domain into the privacy of the bedroom.

“During the ’60s, all the formal trappings of Jim Crow were gone, but there was one tower left and Loving brought this down,” says Peter Wallenstein, a Virginia Tech history professor who has written two books about the Loving decision, which invalidated state laws that banned miscegenation.

Marriage, which was not covered by the Civil Rights Act, was one of the last areas of overt discrimination, says Dennis Parker, director of the American Civil Liberties Union’s Racial Justice Project. “It was the last bastion of historical racism,” he says. As a result, Loving had “an extraordinary impact” and signaled a change in societal attitudes.

On the 50th anniversary of the decision, the Loving case has gained renewed significance, and the recently released Hollywood film by the same name has revived the story for the masses, at a time when issues that surround equality and state’s rights are dominating the political discourse.

The Loving movie chronicles the love affair between Richard Loving, a white man, and Mildred Loving, a black woman, who were arrested in the 1950s because their interracial marriage violated Virginia’s anti-miscegenation statute. Exiled from the state, they moved to Washington, D.C., but desired to return to Virginia. Mildred Loving wrote to then-Attorney General Robert Kennedy, seeking help. Kennedy then referred the couple to the ACLU, which took the case alongside two upstart pro bono lawyers, Philip Hirschkop and Bernard Cohen.

Eventually, in 1967, the Supreme Court unanimously decided in their favor, holding that state laws that foreclosed the opportunity to marry violated the 14th Amendment’s equal protection and due process clauses.

Although the movie is about a landmark court case, it isn’t a traditional legal drama loaded with intense courtroom scenes. For Parker, that deliberate filmmaking decision helped show that the Lovings were two regular people “who were pointedly not activists,” but who made history, he says. But at least one of the lead attorneys was unimpressed.

“I didn’t like the film, personally,” says Hirschkop, who helped argue the case. (See “Justice for All.”) “It was entertaining but flawed.” Much of what was portrayed didn’t happen, says Hirschkop, who wasn’t interviewed by the filmmakers even though he’s a character in the film. “I understand the writer’s privilege, but the inaccuracies disturb me—especially when they’re unnecessary.”

Despite Hirschkop’s review, legal scholars are unanimous on the impact the case had on history and the importance of the film’s message.

In the more recent fight for marriage equality, personal stories such as the Lovings’ played a similar role in persuading the Supreme Court justices who decided Obergefell v. Hodges, the 2015 landmark case that prevented states from banning same-sex marriage. Wallenstein says although early efforts to apply Loving to LGBT couples were rebuffed, the case still was “an important tributary in a growing river. It gave language for substantial change to take place,” even though it took decades.

This article originally appeared in the April 2017 issue of the ABA Journal with this headline: "Loving, Then and Now: Landmark court case gains renewed significance on the big screen."