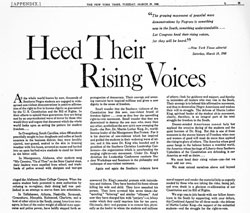 Courtesy of the Library of Congress

By the spring of 1964, in an effort to curtail what they regarded as meddlesome and hypocritical coverage of the civil rights struggle, Southern officials had brought nearly $300 million in libel actions against national media outlets. One such case was filed by Montgomery, Ala., city commissioner L.B. Sullivan, who claimed he had been defamed in a full-page editorial ad (at left) that ran in the New York Times in March 1960. The ad did not name him but did include criticism of the city’s police department (over which he had supervisory authority), as well as several factual errors.

An Alabama jury awarded Sullivan $500,000 in damages and the state supreme court upheld the judgment, holding that public officials could be libeled by charges leveled against the agencies they headed. The U.S. Supreme Court unanimously reversed the award in March 1964, ruling that public officials could not recover libel damages unless they could prove false and damaging statements about them had been made with “actual malice.”

In his majority opinion, Justice William J. Brennan Jr. famously declared that “we consider this case against the background of a profound national commitment to the principle that debate on public issues should be uninhibited, robust and wide open.” The decision, which radically reshaped libel law and the tenor of public discourse, stands as arguably the boldest defense of press freedoms in the court’s history.