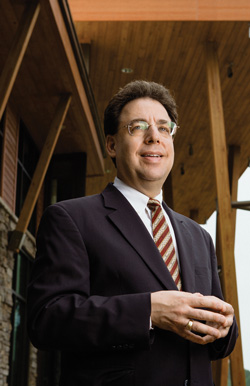 Daniel Siegel: “Not having paper in front of them scares lawyers.” Photo by Gene Smirnov.

While some old-school attorneys would rather camp out in anoraks at Burning Man than adopt new technology, professional law technology implementers say it doesn’t have to be that way. Understand the mind of the attorney, they advise, and chances are you can tame the technophobic beast.

“Lawyers seem far more resistant to technology than people in the general business community,” says Bruce A. Olson, a longtime litigator and president of Onlaw Trial Technologies, based in Appleton, Wis. “In some cases, they see no incentive to achieving the increased productivity that properly deployed technology can offer.”

Daniel J. Siegel, a lawyer and president of Integrated Technology Services in Havertown, Pa., has also seen his share of legal technology implementations: “It’s the nature of the profession. We all think we’re smart and our way is right. So it’s hard to change.”

Over the years, Olson and Siegel have learned to bob and weave through the toughest of tech-resistant thickets. Speaking at LegalTech New York 2012, they said that along the way they’ve acquired a few tactics that worked when their only welcome was a pair of folded arms and a sneer. The tactics include:

• Wean the digital-wary from paper. “Not having paper in front of them scares lawyers,” Siegel says. More than most professionals, attorneys need to be convinced that with pro-level computer backups and redundant systems, digital documents really are as permanent as data printed on dead trees.

• Look past age stereotypes. While we’re all fond of the befuddled grandfather who calls to say he just sent you an email, don’t assume graybeards will be the most difficult clients. Indeed, Olson’s experience is that some of his toughest customers are young attorneys who see new technology as a needless time suck.

• Equate tech training with law training. Attorneys sometimes see the light after implementers ask them to see technology as another competitive skill that needs to be mastered. “After all, we are all trained to be lawyers and trained for other skills,” Siegel says.

• Don’t forget peer pressure. Fortunately, attorneys tend to be a competitive lot. During a recent implementation of a new document management system, Olson says, he was able to bring his last holdout on board by simply pointing to other attorneys who’d already mastered the change. “Once that was established—and the positive reasons for change could be demonstrated along with the successful use of the product—the recalcitrant lawyer was persuaded to follow suit.”

• Get top-down support. Job one for nearly any type of successful change, top-down support is still too often overlooked or not emphasized enough in tech transitions. “If the bosses … won’t use the technology,” Siegel explains, “then neither will their staff.”

• Charm the staffers. Implementers can also often make an end-run around the tech-stodgy by charming support staff. “If they, for example, see the benefits of a paperless office in day-to-day work, they will typically bring along the reluctant attorney over time,” Olson says.

• Don’t captain a Titanic-in-waiting. Although a tech implementer is by definition stout-hearted, there are instances when a project is just a suicide mission. If you’re ever invited to squire an obviously doomed tech migration, find the most polite way to run for your life. “Wholesale changes without customization and without a plan and without a training program won’t work,” Siegel says.