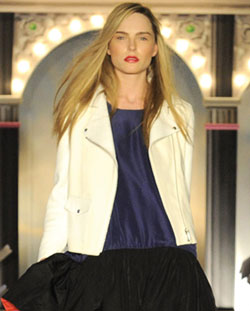 Since she was 14 years old, Sara Ziff has been the face of fashion companies including Tommy Hilfiger, Stella McCartney and Kenneth Cole. Now, at 29—an age when the careers of most models have already faded—Ziff’s work as an emblem for other women has just begun.

This year, Ziff launched the Model Alliance, an advocacy group aimed at improving the working conditions of fashion models. And to prove she’s serious, Ziff has joined forces with Fordham University’s Fashion Law Institute. “Traditionally, there’s been a code of silence among models about some of these touchy subjects,” says Ziff, who took an interest in labor movements and community organizing while majoring in political science at Columbia University.

The Model Alliance came into being after Ziff screened her 2009 documentary, Picture Me, in New York City. After the screening, where Ziff led a heartfelt discussion with the audience about the sexual abuse models can face, Fordham’s Susan Scafidi approached her to help formulate a plan.

Scafidi, who heads Fordham’s Fashion Law Institute, knew a thing or two about being taken seriously in an industry many regard as pure fluff. She spent years in the trenches before she succeeded in getting fashion law recognized as a legal field, which she attributes to colleagues not being sure whether what she taught was a real legal realm or “too girlie.”

Together, the two knew the obstacles they would face in trying to help relieve some of the labor issues in the fashion world.

For example, agencies collect money from clients on behalf of models and hand over payment only after deducting commissions and any expenses. Sometimes, models aren’t even paid in cash and are only allowed to keep garments worn during a gig. “Often, when models are contracted for a job, they have no idea what—or if—they are getting paid,” Scafidi says.

The Model Alliance won’t attempt to form a union—that was attempted before and failed—but the group is working to educate modeling professionals about existing laws and freedoms, drafting a Models’ Bill of Rights and setting up a confidential grievance center that takes calls from models with problems.

“There are hundreds of thousands of 14-year-olds who read Vogue and who aspire to be glamorous,” Scafidi says. “If they can see these models take control over their careers and dignity and empower themselves, this will have a much larger effect than just on the models themselves.”

“It’s Not Easy Being Beautiful,” May, page 13, may imply that Fordham University law professor Susan Scafidi did not receive tenure immediately because of her interest in the field of fashion and the law. To clarify, Scafidi did receive tenure in the normal course of time but refrained from writing about fashion and intellectual property until after receiving tenure.