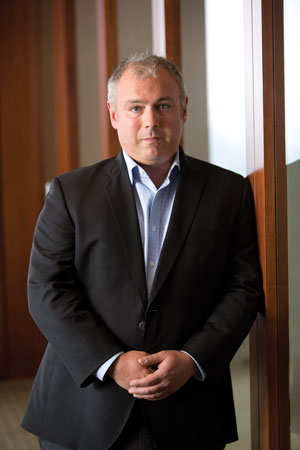 Justin Swartz has put strip clubs on notice that misclassifying exotic dancers as independent contractors can be quite costly. Photography by Arnie Adler.

Swartz, a partner at Outten & Golden, says he has represented thousands of dancers at adult entertainment establishments in lawsuits alleging federal and state labor law violations.

His most recent case is against a New York club doing business as Larry Flynt’s Hustler Club. The federal class action claims the business misclassified its strippers as “independent contractors” in violation of the federal Fair Labor Standards Act and New York labor law. In doing so, the suit claims, the club avoided paying minimum wages and overtime compensation to its dancers, and instead charged them a “house fee” for the privilege of plying the pole, lap dancing and collecting tips.

The suit claims that the club further strips strippers’ earnings by encouraging customers to tip with “Beaver Bucks” vouchers, purchased with credit cards. The house takes its cut when the dancers exchange the vouchers for cash.

The defendants, represented by Schröder, Joseph & Associates of Buffalo, have filed a motion to compel arbitration and enforce the class action waiver in the club’s contract with its dancers.

The Hustler Club case is one in a series of FLSA suits and settlements against strip clubs nationwide. Swartz has settled with at least five other New York clubs over FLSA claims, including one for $10.8 million. Sex workers “are among the most vulnerable of employees,” often coming from low-income backgrounds or being recent immigrants, Swartz says. They generally have to conceal their job from family and friends while working in “dangerous environments where they have to look out for themselves.”

Like other businesses, some strip clubs may not know about the legal definition of independent contractors, says Karen Young, a human resources consultant in Harrisburg, Pennsylvania. And some probably don’t care. “They don’t think they’ll get audited, and they probably believe that their staff is making enough money and won’t make a stink,” Young says.

In practice, though, strip clubs and other businesses that misclassify their workers as independent contractors have more to worry about than IRS auditors and plaintiffs lawyers. The violations may also be flagged when a terminated worker files for unemployment benefits or an injured “contractor” seeks workers’ compensation, says Young.

According to Swartz, classifying exotic dancers as independent contractors is a legal sham. These supposed entrepreneurs have virtually no personal control or investment in their supposed business. The clubs dictate their schedule, pay, dance routines, costumes and workplace conduct, he says. Swartz also scoffs at the claim that strippers’ work is peripheral to the club’s essential business of providing food and drink. “They provide the very service that the club offers to the public,” he says. “No one’s coming to these places for the steak.”