Click With Caution: Online Toolbox Can Throw Wrench Into Your Life 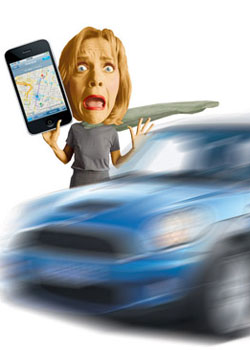 A day without Google is like … well, many of us don’t know or remember what that’s like. The ubiquitous Internet giant with its many eponymous offshoots is so ingrained in our daily existence, it’s now as much a verb as it is a noun. Depend ing on whom you talk to, that’s either a boon or a bane.

Google Maps, for example, is an exceptional tool for those of us who are directionally challenged. Just type in a destination and get turn-by-turn guidance. There’s even a separate set of directions if you’re hoofing it in stead of driving. That’s what Lauren Rosenberg was doing in January 2009.

Rosenberg, a Los Angeles County, Calif., resident, needed walking directions between two addresses in Park City, Utah. So she pulled out her trusty BlackBerry (they’re not just for lawyers, you know) and tapped her way to Google Maps.

According to a lawsuit filed in May in the U.S. District Court for the District of Utah, the free app led Rosenberg out onto Deer Valley Drive—aka state Route 224, a rural highway where vehicles travel at high speed and there are no sidewalks.

While negotiating the thoroughfare, Rosenberg was struck by a vehicle and reportedly suffered serious injuries. Her suit claims that Google was negligent in leading her onto a highway “not reasonably safe for pedestrians,” and that it failed to warn her of the risks of walking the “dangerous path.”

Does anyone remember being told fairly often as a child that, as a general rule, one should avoid traffic while on foot? Just asking. But it’s Google—it must be right, or so the thinking seems to go.

Google Maps offers this online caveat when someone requests pedestrian directions: “Walking directions are in beta. Use caution—this route may be missing sidewalks or pedestrian paths.” But who has time for fine print these days?

Another nifty tool is Google Earth. You can see the planet from a spaceship’s-eye view or you can zoom in and see your own backyard—or anyone else’s, for that matter.

So if you have a habit of sunbathing in advanced states of undress, for instance, your posterior could be recorded for posterity. Or maybe you installed a pool but never found time to get that permit. Nowadays, that’s gonna cost ya.

Thanks to Google Earth, municipalities don’t have to rely on ticked-off residents to rat on neighbors. Towns like Riverhead, N.Y., have used it to conduct noncompliance checks on residents who aren’t on record as having permits for the pools clearly visible in their yards. It has proven to be quite a lucrative endeavor for the town.

Not surprisingly, privacy advocates have a rather large problem with this. New York Civil Liberties Union spokeswoman Donna Lieberman conveyed the organization’s disapproval, telling the Associated Press that the practice “does not feel like a free society kind of operation.”

In the face of strong opposition, Riverhead ceased aerial snooping in September.

So is Google a blessing or a curse? It really doesn’t matter what we think. It’s here, and we just have to stay out of its way.