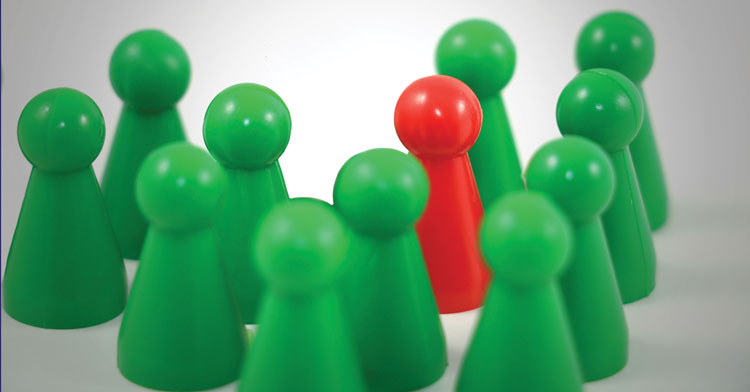 When an Oregon jury went into deliberations to consider sex-related charges against Olan Jermaine Williams, they quickly decided he wasn’t guilty of one of the two counts against him. The second was more complicated.

Williams, who is African-American and a married gay man, was accused of performing nonconsensual oral sex on a man who’d passed out from drinking at a party in 2014. The man had been left to sleep in Williams’ apartment while the party continued, but the man awoke that night to find someone in his pants without permission. He later identified Williams as his assailant.

Initially, the jury voted 9-3 to convict Williams of sodomy, with the jury’s lone African-American joining two others in voting to acquit. During the four hours of deliberations that followed, all three stood by their opinions. But after it became clear that deliberations could extend into the next day, one holdout changed her vote, saying she didn’t want to come back.

In 49 U.S. states and the federal court system, a 10-2 vote would not have been enough to convict. But this debate took place in Oregon, which is currently the only state that permits convictions (for felonies other than murder) on a 10-2 or 11-1 vote of the jury. That practice has come under criticism in recent years by people who say it was enacted for racist reasons; it denies minority viewpoints on the jury a voice and removes an important safeguard against wrongful convictions.

“If there’s one or two [holdouts] on a jury … it’s basically showing that the state didn’t do its job to prove the case,” says professor Aliza Kaplan of Lewis & Clark Law School. “And that’s how our system works, and that’s how it should work.”

The Oregon legislature is considering a constitutional amendment that would require a unanimous jury for a conviction. But the voters would also need to approve the change via referendum, and it has opposition. In particular, certain elected district attorneys oppose it, arguing that its main effect would be to increase hung juries, requiring the state to mount more retrials and crime victims to relive their traumas a second time.

Rep. Jennifer Williamson, a Democrat from Portland and a co-sponsor of the measure, says it can be a tough conversation to have with voters. The movie “12 Angry Men is what people think of, so the idea that you have something less than that is baffling,” says Williamson, the majority leader of the Oregon House. “They’re pretty shocked that we have a lesser standard.”

a question of race

If Oregon abandons nonunanimous juries, it will follow Louisiana, which abolished them via referendum last fall. The Louisiana campaign focused heavily on racism, which—despite substantial differences in the two states’ demographics, politics and history—is an argument in Oregon as well. Oregon adopted its nonunanimous jury system in 1934 after the high-profile trial of Jacob Silverman for the murder of James Walker. Both men had spent time incarcerated, and press coverage of the trial was lurid. In the end, one of Silverman’s 12 jurors held out for his innocence, and the jury returned a compromise verdict of manslaughter. Silverman was sentenced to just three years in prison.

As Kaplan and co-author Amy Saack describe it in a 2017 Oregon Law Review article, it was significant that Silverman was Jewish. In the 1930s, the United States was changing both economically and socially as waves of Jewish and Catholic immigrants arrived.

That set off a resurgence of the Ku Klux Klan, which seems to have had influence in Oregon. Gov. Walter Pierce, who took office in 1922, appointed Klansmen to state office after the Klan openly supported his election. In response to the Silverman verdict, the Morning Oregonian, the state’s largest newspaper, wrote that “the vast immigration into America from southern and eastern Europe, of people untrained in the jury system, have combined to make the jury of 12 increasingly unwieldy and unsatisfactory.”

That narrative is disputed by defenders of allowing nonunanimous juries, who note that Oregon elected a Jewish governor in 1931. But it’s not disputed that allowing nonunanimous juries was a reaction to the Silverman case. The legislature introduced the constitutional amendment within a month of the verdict, and the voters pamphlet expressly cited the case as an example of an unreasonable juror.

The change put Oregon in an odd place, legally speaking. The U.S. Supreme Court had consistently said nonunanimous verdicts would be unconstitutional in federal court, but they were in place and apparently unchallenged in Louisiana. In 1972, the court considered Sixth Amendment challenges to both states’ systems but ultimately re-jected them. Apodaca v. Oregon was an unusual plurality decision where the justices split 4-1-4, which meant a one-justice concurrence was the opinion that became law. That’s weak support for a rule that affects defendants’ civil rights, critics say.

That was one argument before the ABA House of Delegates when it passed Resolution 100B in August, urging unanimous juries nationwide. That resolution, and critics like Kaplan, also argue that nonunanimous juries raise the chances of wrongful convictions.

And nonunanimous juries marginalize minority viewpoints, critics say. That’s a complaint in the Williams case, where the viewpoint of the African-American holdout juror didn’t affect the outcome. Asking the Oregon Court of Appeals for a new trial, Williams argued that because only about 2 percent of Oregonians are black, nonunanimous juries silence African-American jurors without actually excluding them.

“Because it basically denies a voice to that minority juror, there’s an equal protection problem,” says Portland attorney Ryan Scott, who represented Williams in his post-conviction motion for a new trial.

That motion was denied, and Williams’ appeal was heard in October. His appellate attorney, Marc Brown, chief deputy defender of the Oregon Office of Public Defense Services, says a favorable ruling could end nonunanimous juries in the state. “If the court ... finds that this provision has a racial basis, I think it would be hard not to have it apply to everyone.”

A ruling hadn’t been made before the ABA Journal went to press. Even if it’s favorable to Williams, an appeal may be rendered unnecessary by the U.S. Supreme Court, which agreed in March to take up a case on nonunanimous juries, Ramos v. Louisiana. In that case, the defendant—convicted of murder on a 10-2 vote—asks the court to revisit the Sixth Amendment argument in Apodaca and its companion case, Johnson v. Louisiana.

But Oregon could change the law on its own with Williamson’s bill, House Joint Resolution 10. In order to change the state constitution, lawmakers must pass the bill by June—and then voters must approve it in a referendum, likely in 2020.

A few years ago, the measure was opposed by the Oregon District Attorneys Association, hurting its chances. But last fall, the ODAA came out in favor of the change. The organization did not respond to ABA Journal requests for comment regarding its change in position.

Not every elected DA is a fan, however. Former Clatsop County District Attorney Joshua Marquis, whose term finished Dec. 31, says the issue has deeply split the DAs. Marquis was one of three DAs who wrote an editorial in the Oregonian last fall opposing a change to the nonunanimous jury system. The editorial said unanimous juries would do nothing but increase hung juries. Marquis was more direct in his remarks to the ABA Journal.

“The one place you see these [split verdicts] are upper-middle-class white men charged with sex offenses, usually against children,” Marquis says. “Those are the kind of cases that juries tend to break down 11-1 and 10-2.”

Marquis says he also hasn’t seen any evidence that racism has played a part in any recent wrongful convictions with split verdicts. But his biggest concern is that it will marginalize victims, especially victims of sex crimes.

Kaplan sees it as a question of defendants’ rights. “Personally, if I’m the defendant … I want the state to truly prove their case,” she says. “And if I’m a juror and I’m spending my time watching all this and participating fully, I want to know that my voice and my thoughts matter.”

This article was published in the May 2019 ABA Journal magazine with the title "It’s Unanimous—Almost."