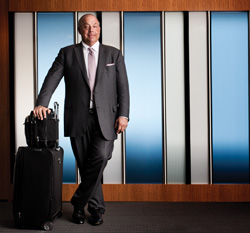 Steven Zager: “There is a luxury to being completely focused on a trial—[putting] behind you things that aren’t related.” Photo by Robb Scharetg.

For 20 years Steven Zager has spent half the year working from hotel rooms, planes and makeshift offices set up in locales far from his home base—these days the New York City offices of Akin Gump Strauss Hauer & Feld.

Such is the life for high-stakes litigators like Zager—who, as partner in charge of the firm’s global intellectual property practice, has resigned himself to a life of constant travel.

“I’ve been living out of a suitcase for a very long time,” Zager says. “It’s a little frustrating.”

Despite frequent separations from his family, he says solitude offers a clear advantage: the ability to wholly concentrate on cases with multimillion-dollar outcomes, such as the $152.7 million jury verdict Zager won in Hexion Specialty Chemicals Inc. v. Formosa Plastics Corp., a 2006 trade secrets misappropriation case.

“There is a luxury to being completely focused on a trial—being able to put behind you things that aren’t related,” he says.

When holed up for ongoing litigation, Zager depends on temporary “war rooms” to simulate regular law offices. During a recent trial in San Jose, Calif., he and his staff worked out of a hotel space outfitted with multiple workstations, extensive case files, printers, copiers—the works.

Zager adheres to some travel rules: Never fly on Mondays or Fridays, when it’s overly busy; take the first flight of the day so that equipment and crews are fresh; and find a reliable car and driver. And when things go awry, don’t stress out or berate people.

Above all, value personal time with family as sacred.

“I leave all the work, literally turn off my BlackBerry,” Zager says.

Even in an age of advanced technology, of videoconferencing and Skype, the nation’s top litigators are still required to embrace a life of steady travel, obligated by judges to appear in the flesh.

“The courts have not embraced the use of technology in a big way. They are going to want you to be there and show up for significant hearings,” says Jane Thorpe, an Atlanta-based mass torts litigator and partner with Alston & Bird. “There’s not much you can do about that. You have to show up.”

Thorpe, who has defended corporations in high-profile product liability cases involving breast implants and asbestos, has her own favorite rituals: Maintain a good supply of favorite junk food and know when to take time out to decamp in a local coffee shop or independent bookstore to maintain sanity.

She says the demands of travel are offset by rewarding collegial relationships cultivated on the road.

“Friendships form that last for decades,” says Thorpe, who has been traveling for work regularly for more than 30 years. “That’s part of why we do this.”

The mother of grown children, she says she learned early on to put her foot down when necessary to maintain a healthy work-life balance.

“I have never said no to a trial or major hearing; I have said, ‘No, this meeting in Timbuktu isn’t going to work,’ ” she recalls. “You just have to be in charge of your life instead of letting all the stuff be in charge of you.”

FIND THE BRIGHT SIDE

Even so, it takes a certain personality to handle the itinerant lifestyle.

Bill Carmody, another veteran trial lawyer who heads the New York office of Susman Godfrey, has handled high-profile litigation ranging from structured derivatives to trade secrets. He says it’s important to tap a sense of adventure, even on the most mundane trips.

“It could be a fun, fancy city that everyone would like to go to like San Francisco … [or] to other cities like Baltimore or Toledo, Ohio,” says Carmody, a self–described foodie who scopes out local cuisine. “It doesn’t much matter. I kind of explore the city and get out and meet the people.”

Of course it helps when you can enjoy creature comforts. Like most clients of big-ticket litigators, Carmody’s are aware of the pressures of the job and never pinch pennies. Staying in top hotels allows him to emerge rested and ready for the demands of court.

He also owes a great debt to his wife, who frequently travels with him and serves as a makeshift advance person.

“I’m spoiled rotten and I know it,” Carmody jokes. “That’s one of my secret weapons.”