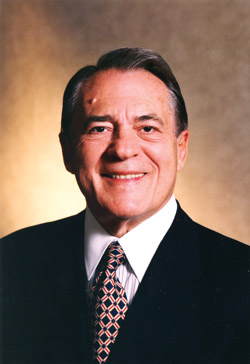 In 1993, Shestack led a human rights delegation to the former Yugoslavia, which was embroiled in a bloody ethnic conflict. “It is a bitter, disillusioning and dispiriting experience to see that people can treat each other with such brutality as we approach the 21st century,” he said later. Five years later, while serving as ABA president, Shestack participated in the U.N. conference that produced the statute creating the International Criminal Court.

Shestack, a graduate of Harvard Law School, was in private practice at Schnader Harrison Segal & Lewis in Philadelphia.

In 2006, Shestack received the ABA Medal, the association’s highest award. In an interview with the ABA Journal marking the event, he explained that two family members helped him define his approach to practicing law. His grandfather, a rabbi, passed on a quote from the biblical book of Deuteronomy: “Justice, justice shalt thou pursue.” And his son, Jonathan, then 7, gave his answer to what it is that a lawyer does: “He helps people.”

“With his tireless work for human rights and the rule of law, Jerry made a positive difference in the lives of so many, not only in our country, but around the world,” says ABA President Wm. T. (Bill) Robinson III. “The ABA has lost an inspiring leader, but the fruits of his labors will long be to our collective benefit. Jerry will be missed,” says Robinson, the member in charge of the Florence, Ky., office of Frost Brown Todd.

U.S. Secretary of State Hillary Rodham Clinton was among those issuing statements mourning Shestack’s passing. “He was a committed public servant and a dogged defender of human rights,” her statement says. “Countless women and men are better off because of Jerry.”

Shestack helped found the ABA Section of Individual Rights and Responsibilities in the 1960s, and he served as one of the section’s first chairs in 1969-70. He also was the first chair of what is now the ABA Commission on Mental and Physical Disability Law, and he helped found the Center for Pro Bono. He chaired the Standing Committee on Legal Aid and Indigent Defendants and served on the Standing Committee on the Federal Judiciary, which evaluates nominees to the federal bench.

Shestack was a member of the committee in 1987, when President Ronald Reagan’s nomination of conservative jurist Robert H. Bork was considered by the Senate in a series of contentious hearings. Many Bork supporters contend that one factor in his rejection by the Senate was the mixed review that he received from the ABA committee. Most committee members gave Bork its highest rating, but four of them said he was “not qualified.” The committee did not divulge how each of its members voted.

A statement issued by Shestack’s family announcing his death is coy on the subject. “Many insiders believe that in 1987, as a member of the ABA committee reviewing judicial appointments, Shestack was responsible for the unqualified rating that kept Robert Bork off of the Supreme Court,” notes the statement. “Shestack maintained an impish silence on the subject.”

Shestack is survived by Marciarose, his wife of 60 years, a prominent anchorwoman and columnist in Philadelphia; his son, Jonathan, of Los Angeles; his daughter, Jennifer Doss, of Philadelphia; and five grandchildren.