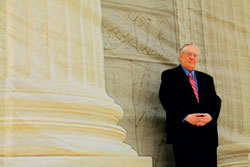 Michael Cherry’s firm is in the forefront of the challenge to the court’s use of call detail records to pinpoint cellphone location. Photo by Mary Noble Ours.

At his trial last year on federal kidnapping and conspiracy charges, prosecutors sought to introduce cell tower evidence purporting to show that calls placed from defendant Antonio Evans’ cellphone could have come from his aunt’s house, where the victim was thought to have been held for ransom.

That’s not unusual. Hardly a day goes by when some prosecutor doesn’t go to court armed with cell tower evidence he or she claims places a defendant in the vicinity of a crime the defendant is accused of committing.

What made the Evans case unusual was the fact that the defense even put up a fight to keep the cell tower evidence out of the trial. Evans’ lawyers said the technique has not been shown to be scientific.

Such testimony usually goes unchallenged, presumably because most defense lawyers either accept at face value prosecutors’ assurances that cell tower evidence is scientific or because they don’t know enough about the underlying technology to understand its limitations. And, on the few occasions that it has been challenged, the courts have always let it in.

Until U.S. District Judge Joan H. Lefkow of Chicago came along, that is. Lefkow, who tried the Evans case, took an in-depth look at the cell tower evidence the government was proposing to use and found it wanting. The judge wrote that “multiple factors can affect the signal strength of a tower” and an FBI special agent’s “chosen methodology has received no scrutiny outside the law enforcement community.” As a result, the court concluded that the government had not demonstrated that testimony was reliable, Lefkow wrote in an Aug. 29, 2012, opinion and order.

Critics of cell tower tracking, as the practice is often called, say the decision is long overdue. It marks the first partial defense victory against the use of such evidence on Daubert grounds, the test formulated in the 1993 U.S. Supreme Court case Daubert v. Merrell Dow Pharmaceuticals. The test says that the judge should rule on the admissibility of scientific information submitted to assist the fact finder. It is used by federal and many state courts to determine the admissibility of expert testimony. Critics hope the case represents a turning point in the courts’ general tendency to submit when dubious scientific techniques such as cell tower tracking are proffered.

Michael Cherry, the CEO of Cherry Biometrics, a Falls Church, Va.-based consulting firm that has led the legal assault on cell tower tracking, calls it “junk science” that should never be admitted in any court for any reason. In fact, he can’t believe that such an easily disproved technique, which has been around for a decade or more, is still routinely being used in court.

“No one who understands the relevant science would ever claim that data from a single cell tower can reliably be used to specify the location of a caller at the time a particular call is made,” he says.

But in 2011, the nation’s nine largest cellphone carriers responded to 1.3 million requests for subscriber information of all kinds, including cell tower records, from law enforcement officials, according to data compiled by a congressional committee.

Cell tower records, also known as call detail records, are the billing records cell companies use to keep track of their customers’ calls. They show the date and time of all calls made or received, the numbers called, the duration of each call, and the cell towers used to begin and end a call. And those requests have been rising at an annual rate of 12 percent to 16 percent in the past five years.

Edward J. Imwinkelried, a law professor at the University of California at Davis who co-authored a treatise on scientific evidence, says cell tower records are not completely worthless. But they’re nowhere near as probative as many police and prosecutors would like to think.

“Some of what these people who are interpreting this data are saying they can do with it is just nonsense,” Imwinkelried says.

Imwinkelried, who last year co-wrote an article in Judicature magazine on the subject with Cherry and a handful of defense lawyers, says that cell tower records, unlike Global Positioning System technology, were never designed to be used for tracking purposes. But not all cellphones are equipped with GPS technology, which can pinpoint a caller’s location down to a radius of about 50 meters, leaving cell tower records the only way of tracking a phone without it.

Imwinkelried says he’s not surprised that cell tower evidence has survived as long as it has without being subjected to serious scientific scrutiny. He likens it to voiceprint identification evidence and comparative bullet lead-analysis evidence, two once-highly touted forensic techniques that were initially embraced by the courts but eventually discredited.

Prosecutors in the Evans case said the significance of the ruling was limited. They still were allowed to put on evidence showing that Evans’ phone repeatedly connected to two cell towers directly east and west of his aunt’s home. They also put on testimony from an admitted co-conspirator who said Evans helped plan and take part in the kidnapping scheme and was with him at his aunt’s house when the calls in question were made.

Evans was one of three men charged in a hare-brained scheme to kidnap the 15-year-old son of a Chicago-area junk dealer whom they inexplicably thought was wealthy and hold him for a $450,000 ransom. The youth, who was snatched off a street on his way to school by two men in April 2010, was held in the basement of a Chicago home for 36 hours before being freed unharmed and given money for bus fare.

The evidence included the proposed testimony of FBI special agent Joseph Raschke, a recognized expert in cellphone analysis, who was expected to testify that by comparing the call detail records for Evans’ phone with the location of the two towers it connected to, he could narrow the location of Evans’ phone to an area the size of a few city blocks, one his aunt’s home falls squarely in the middle of.

After an evidentiary hearing, Judge Lefkow allowed Raschke to testify about how cellular networks operate. She said such testimony would help the jury narrow the possible location of Evans’ phone during the course of the alleged conspiracy. But she refused to allow Raschke to testify that calls made from Evans’ phone could have come from the basement of his aunt’s home because he hadn’t demonstrated to her satisfaction that cell tower tracking is scientific.

The judge said that Raschke’s testimony was based on the erroneous assumption that a cellphone will always connect to the tower with the strongest signal—usually the one closest to the phone when the call is made. Yet there are a variety of factors that determine which tower a phone will connect to, including weather, topography, physical obstructions, tower maintenance and whether the phone is being used indoors or out.

Lefkow also said that Raschke had offered no proof that the tracking technique works, other than his assurances that he and other FBI agents have successfully used it to find people both living and dead, and had done so with a “0 percent” rate of error.

Evans, who ended up being acquitted, claimed that the cellphone registered to him had been purchased in his name by another co-defendant, who has also pleaded guilty and is awaiting sentencing. Evans said he knew the co-defendant through the drug trade. He also pointed out that he, unlike his two co-defendants, had not been captured on surveillance cameras making ransom calls from various pay phones in the Chicago area.

Raschke didn’t return requests for comment. But Mark Eckenwiler, until recently the Justice Department’s primary authority on electronic surveillance, says cell tower records, while no smoking gun, can provide reliable and highly probative evidence of a defendant’s guilt or innocence. And anybody who says otherwise, he says, “is trying to sell you a bill of goods.”

Eckenwiler, now senior counsel with Perkins Coie’s privacy and security practice in Washington, D.C., is the former deputy chief of the Justice Department’s computer crimes section, where he co-authored a brief last fall in opposition to accused drug dealer Antoine Jones’ motion to suppress cell tower records against him on Fourth Amendment grounds.

Jones is the former Washington, D.C., nightclub owner whose drug trafficking conviction and life sentence were overturned in a landmark ruling last year by the U.S. Supreme Court, which held that government installation of a GPS device on Jones’ car without a warrant violated his Fourth Amendment rights. When the government announced plans to retry Jones using the cell tower records instead, he moved to suppress those records on the same grounds.

In the brief he co-authored, Eckenwiler said that cell tower records can provide a “general indication” of where a call was made down to within a few hundred yards under certain conditions, but was “too imprecise” to place a caller inside a constitutionally protected space, such as a home.

In the wake of Lefkow’s ruling, Imwinkelried says he doesn’t expect cell tower evidence to disappear from the courts overnight. But he hopes it will persuade more defense lawyers that such attacks have merit. And he’d like to think it will prompt some prosecutors to take another look at the evidence to make sure they’re not promising more than they can deliver.

He says the decision suggests only that the judge felt the prosecution’s expert “hadn’t done his homework,” a conclusion Eckenwiler says after having read her opinion he would probably agree with.