Putting the Case Together 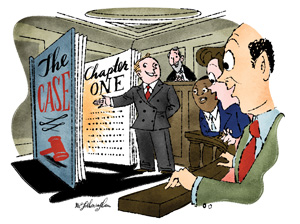 It’s not like I need serious help or anything,” said Paul Vigil, the doctor-turned-lawyer who says he finally realized it’s more important to right wrongs than write prescriptions. “It’s just that my work doesn’t often take me all the way to trial, and that’s where this case is headed.”

“Tell me about it,” said Angus.

“I’m lead counsel in an old-fashioned family feud,” Paul said. “My clients are two young men–Bobby and Marty Sanders–who were left a high-tech tool pattern shop by their father.

“It was easily worth $10 million, but after some creative bookkeeping and money shuffling by their uncle, Max Gaines–who had nothing to do with the business when it belonged to his late brother-in-law–Max now owns everything and the boys have almost nothing.

“We’re three months away from trial,” said Paul, “and I’ve made a list of what I have to do to get ready. I wonder if you could look it over to see if I’ve left out anything important.”

Looking at the list, Angus said, “My first problem is, I can’t tell what’s your legal theory. Breach of contract?”

“Not just that,” said Paul. “Breach of contract, fraud and promissory estoppel. They make a nice package.”

“And this list,” said Angus, “is what you came up with, digging through your notes, poring over what you’ve learned in discovery, and thinking about how to approach the case?”

“Which explains why it’s a hodgepodge of disconnected tasks and ideas?” said Angus. “Guilty as charged, your honor,” said Paul with a smile.

“This is why I believe in the trial notebook system of trial preparation,” said Angus, pointing to Paul’s list. “It’s far more efficient than the traditional legal pad-manila folder-brown accordion file method, which produces piles of clutter and very little organization.”

“The heart of the trial notebook is the proof checklist,” said Angus, “and there are three steps.

“First, analyze your cause of action. Write down every element you have to prove to keep the judge from granting the other side’s motion for a directed verdict.

“Second, under each element, list the evidence that proves that point. Make sure you list only things you know are admissible. Remember, just because somebody said it in a deposition or wrote it on a piece of paper doesn’t mean it’s coming into evidence.

“Third is a personal rule I follow to stay out of trouble,” said Angus. “Make sure you have at least two different sources for every fact that’s essential to your case. Whenever you only have one way to prove a key part of your case, that’s when the witness will die, disappear or forget–or the document will be lost, destroyed or suddenly seem incurably vague.”

“So one advantage of the proof checklist is that the weaknesses in your case jump out at you like high cholesterol or abnormal thyroid numbers jump out at a doctor?” said Paul.

“Exactly,” said Angus. “The proof checklist is helpful, but that’s all. It says you’ve got enough proof to get past a motion for a directed verdict, but not how to try your case–any more than it shows you how to build a car, fly an airplane or play the saxophone. “The proof checklist says you have an adequate legal theory that fits the facts, but no more than that. It is not the theory of the case.”

“The theory of the case is a story that not only satisfies the law,” said Angus, “but makes sense out of the facts and appeals to the judge and the jurors’ sense of plausibility so that it rings true in their minds. A theory of the case makes the facts come alive so the people who hear it can ‘see’ for themselves what happened. It lights the sense of fairness in their minds so they want you to win.”

“Wrong,” said Angus. “Then you’re ready to really start working. The problem is, most lawyers persuade themselves better than they persuade anyone else. Now your job is to see what you’ve really got. You need to look at all the patterns, and especially the pieces that don’t fit in those patterns.

“You need to examine the strengths and weaknesses, the aberrations and the inconsistencies. To feel the fabric of the case you have to test the little oddities and think about where they might lead other people’s thoughts.

“You need to keep asking yourself, ‘What really happened?’ and, especially, ‘Why?’ “That’s because lawyers are carried away with the notion that there really is ‘objective truth,’ ” said Angus. “While, in fact, almost every bit of evidence you have is distorted. And it’s not just in lawsuits. It’s the way the world works. Even the most careful witnesses are like the five blind men who touched the elephant and reported that it was a wall, a tree, a spear, a rope or a giant snake.

“You also need to develop a feeling for what kinds of things people are ready to believe and what they are likely to reject unless you find a way around what’s going to bother them. Otherwise you’ll never become the guide that they will want to follow through the thickets of the facts and the law.

“So the best way to start going through your case,” said Angus, “is to make four lists: your strengths, their strengths, your weaknesses, their weaknesses.” “Do you actually write them down?” said Paul.

“Only if you want to win,” said Angus.

“But why bother with these lists?” said Paul. “I thought the point of the adversary system was to make the best argument you could.”

Angus snorted. “One of the biggest misconceptions fostered by legal academics is the notion that a strong argument ignores the weaknesses in your own case.

“There’s nothing persuasive about taking the most extreme position you can create. You’ve got to take the other side’s strengths and your weaknesses into account in shaping your case. Otherwise you’ll fall into the classic trap of getting carried away with your own rhetoric.”

“What’s wrong with that?” said Paul. “Isn’t there another old saying: ‘You can’t sell what you won’t buy?’ ”

“There is,” said Angus. “And the point of that is to limit what you try to sell to those ideas that are plausible–reasonable–that you yourself can buy.

“Which is why you need to pay special attention to the weaknesses in your case and the strengths in the other side’s case. Otherwise you’ll wind up believing things that no one else possibly can–arguments that will make any reasonable judge or jury snort in derision.

“No,” said angus. “then you’re ready to outline the facts–to put the story together. A consistent, coherent human story that not only makes sense, but will make the people who hear it want you to win. This story is the heart of what will be your opening statement.”

“But organized around the legal elements of the case,” said Paul.

Angus looked straight at Paul. “Who told you that?”

“I want to tell you what the late Don Bowen said shortly before he led Exxon’s trial team to victory over Lloyd’s of London in the Exxon Valdez trial: ‘Real people never organize their stories around the elements of a cause of action.’ ”

“Well, then how about chronology?” asked Paul. “Isn’t the order in which things happened a good way to organize your opening statement?”

“Chronology usually implies cause and effect, but often there are separate parts of the story that overlap in time but don’t come together until the end.

“In situations like that, following the calendar creates nothing but confusion,” said Angus.

“Basically, you can organize your opening statement in any way you want.

“Probably the most important factor, however, is tension,” said Angus.

“Tension creates interest. When you set out the elements of a conflict, people naturally want to find out what happens.

“And if you start the story so the judge and the jurors identify with your client, they will be angered when they find out what happens and will want to use their verdict to right that wrong.

“Finally, the story of the case will help you put your entire case together–which witnesses to call, which to save for rebuttal, how and when to use your key trial exhibits.” Paul stood up. “I don’t know how to thank you. I’ve got an awful lot to do during the next three months. There’s enough depth and challenge to trial practice to last much more than a lifetime.”

Angus smiled and said, “Which is why–if you approach it with honesty and dignity–it is truly a noble profession.”

James W. McElhaney is the Baker and Hostetler Distinguished Scholar in Trial Practice at Case Western Reserve University School of Law in Cleveland and the Joseph C. Hutcheson Distinguished Lecturer in Trial Advocacy at South Texas College of Law in Houston. He is a senior editor and columnist for Litigation, the journal of the ABA Section of Litigation.