10 Questions: This single mother of 5 overcame a lifetime of obstacles to become a lawyer 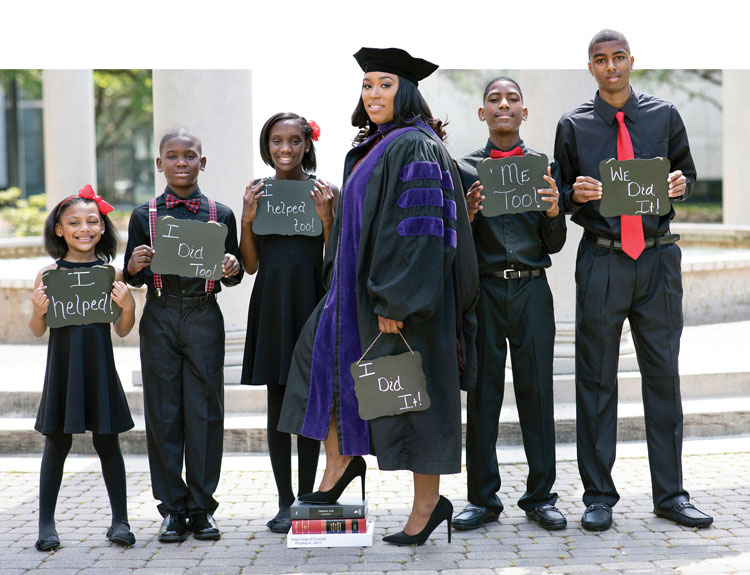 Society often measures misfortune with statistics, and Ieshia Champs could have been included in any number of depressing data sets. Like the number of Texas children in foster care; the percentage of Houston-area students who drop out of high school; the percentage of those teens who end up homeless and later pregnant. But Champs had something more powerful than her circumstances: a dream. Since she was a young girl, Champs wanted to be a lawyer. Throughout the highs and lows of her life, she held fast to that dream—even when she could no longer see a path to achieve it. But achieve it she did. This past October, with the help of her family, friends and church, Champs became a statistic once again. She was among the 77.87 percent of first-time test takers who passed the July 2018 Texas bar exam. In December, she accepted a position as an assistant county attorney with the Harris County Attorney’s Office, where she’ll be working in the Children’s Protection division.

It’s been a long journey, but you’ve finally reached the destination you’ve dreamed of since elementary school. How did you arrive at the decision to become a lawyer?

When I was 8 or 9 years old, I was placed in foster care because my parents were both addicted to drugs. I had been in foster care for about a week when I woke up and found new clothes on the side of my bed. I was really excited because I hadn’t had new clothes in years. I thought, this life is so much better than where I had come from. I remember wondering what I could do to help my friends back home who weren’t as lucky as I was now. That same day was career day at my new school. There was an attorney who spoke to our class, and she went around and asked everyone what they wanted to be when they grew up. I had never thought about it before, and I said, “I don’t know.” She said, “Well, what do you like to do?” I said, “I would like to help people.” She told me about the different types of lawyers and how they helped people, and then she said, “I think you would be an excellent lawyer, and I look forward to seeing you in the courtroom.”

How inspiring! And that dream stayed with you, even when times got tough?

Yes. By the time I was in high school, I had lived in probably six or seven different homes. Sometimes a family would let me stay for months, sometimes a friend would sneak me in to spend the night after her parents went to bed. There was also a time when I was homeless. I would stay in some vacant apartments and sit up all night on the stairs or in the breezeway. Through it all, I was still thinking about being an attorney someday. But with no guidance, I dropped out of high school in my sophomore year. When I dropped out, I realized that my dream was never going to happen. I had more immediate concerns, like, “What am I going to eat?” and “Where am I going to sleep?”

As you got older and started a family, your life began to stabilize. Then 2009 happened. It was both a horrible year and a transformative one. Tell me about it.

Things had really started to turn around for me. I met a man, we had a child together, and I started attending church and getting my relationship with God on track. In January 2009, I received the news that I was expecting my fourth child. I was so excited. But it turned out to be the most traumatic year of my life. Every month, there was a different obstacle. In early February, I found out my kids’ dad—[then] my fiance—had stage 4 cancer. On Feb. 24, while he was doing one of his chemo treatments, I got a call saying my house was on fire. I lost everything I owned that day. My oldest was in school, but my mom was at my home watching my youngest children. They got out just in time. In March, I lost my job. In April, I was told I needed to make funeral arrangements because my fiance wasn’t going to make it. I said, “Oh Lord, I can’t take it.” Then my mother had a slight stroke. In May, we receive a call unexpectedly that my fiance’s dad had passed away from cancer. During all of this turmoil, I was like, “What’s next?” I couldn’t do anything but expect the worst. Then I received a call from my first lady [pastor] at church. She called me and said, “God told me to call you and tell you to go back to school because you need to be a lawyer, and to do that, you need your GED.” I said, “There’s no way God would tell you I needed to do that, with everything I’ve been through.” I said, “I am 24 years old and about to have four children. I won’t even be a lawyer until I am 33!” She said, “Obedience is easier than sacrifice.”

Your fiance passed that year, but you still found the strength to earn your GED, making it possible for you to graduate from college and enter law school. How did you decide on Texas Southern University’s Thurgood Marshall School of Law?

When I went to Thurgood Marshall to turn in some papers and tour the campus, I felt at home. Everyone was so welcoming, and the president of PALS—Parents Attending Law School—approached me and told me it would be a great fit. When I told her how many kids I had, she said, “Oh that’s great! I have 10!”

During college, you got married and had a fifth child, but by the time you started law school, you were a single parent again. How did you juggle everything?

It was a handful. When I started law school, David was 12, Davien was 10, Khassidy was 8, Kaleb was 5 and E’mani was 2. I planned everything. I planned the time they would take baths, the time I would comb their hair, the time I had to study. Any additional time I would either spend with the kids or plan what I needed to study for the additional days to get ahead. My sister helped me even though she had five kids, and my church helped immensely. My study group helped so much they were like my second family. Sometimes, when I couldn’t get a baby sitter, the kids came to school with me. One of my professor’s exact words were, “If you have to bring your children to class, you are more than welcome, but do not miss my class.”

ABA Journal magazine with the title, "Defying the Odds."